Georgia opened the season with a defensive masterpiece, vaulting the Bulldogs three spots in the first rankings of the regular season to No. 2.

The AP Top 25 presented by Regions Bank is based on rankings from 60-plus newspaper and broadcast journalists across the country. Regions is again sponsoring the poll throughout the 2021 season.

Ranked fifth in the preseason, Georgia stunned then-No. 2 Clemson Saturday night. Fittingly, the only touchdown scored in a 10-3 victory was off an interception return.

Defending national champion Alabama was also impressive in a 44-13 dismantling of Miami, adding to its margin at the top. The Tide received 59 of 63 first-place votes this week after earning 47 in the preseason edition.

The rest of the Top 5 includes Ohio State, Oklahoma and newcomer Texas A&M. Clemson tumbled four spots to No. 6.

Cincinnati remains the highest-ranked Group of 5 program, climbing one spot to seventh after routing Miami of Ohio 49-14.

Big Ten rivals Iowa and Penn State rode impressive opening victories to jump eight spots in the poll. Iowa defeated conference rival Indiana 34-6 while Penn State upset Wisconsin 16-14. Both teams have Top 25 matchups right around the corner. The 10th-ranked Hawkeyes make the cross-state trip to No. 9 Iowa State Saturday while No. 11 Penn State entertains No. 25 Auburn Sept. 28 in a prime-time affair on ABC.

Auburn was one of four new arrivals to the poll this week, joining UCLA, Virginia Tech and Ole Miss. LSU, the 2019 national champion, dropped out after losing the opener at UCLA.

Three other teams – Indiana, Washington and Louisiana – also dropped from the poll after preseason inclusion. 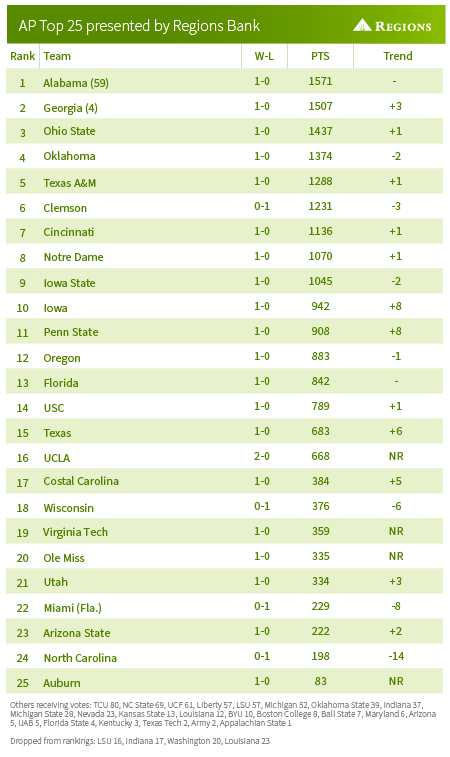