It’s the Monday before the first week of the college football season, and the pilgrimage has begun. Fans decked out in team colors by the dozens fan out through Atlanta’s Chick-fil-A College Football Hall of Fame to explore the history as they prepare for the upcoming season.

And the colors aren’t limited to college teams. A family garbed in New York Yankees attire watch their daughter work the 40-yard dash, while, just feet away, their son tries to improve his vertical jump in interactive exhibits. Yes, split loyalties are allowed here. Dad is also wearing a Notre Dame hat. To explore all the accomplishments of the Fighting Irish – wake up the echoes, so to speak – they’ll need to spend hours here.

Bill Linginfelter has been here before. Maybe a hundred times. He’s the Atlanta market executive for Regions Bank, so he’s visited for business and for fun.

Yet the thrill of excitement never goes away.

“As you walk in, straight ahead are helmets representing every university that plays college football,” Linginfelter said. “When you enter, you choose your favorite school, and immediately your helmet lights up. To the left is a huge mural painted by Steve Penley, an incredible Atlanta artist, which represents the game’s history. You can lose yourself for hours just studying the art.” 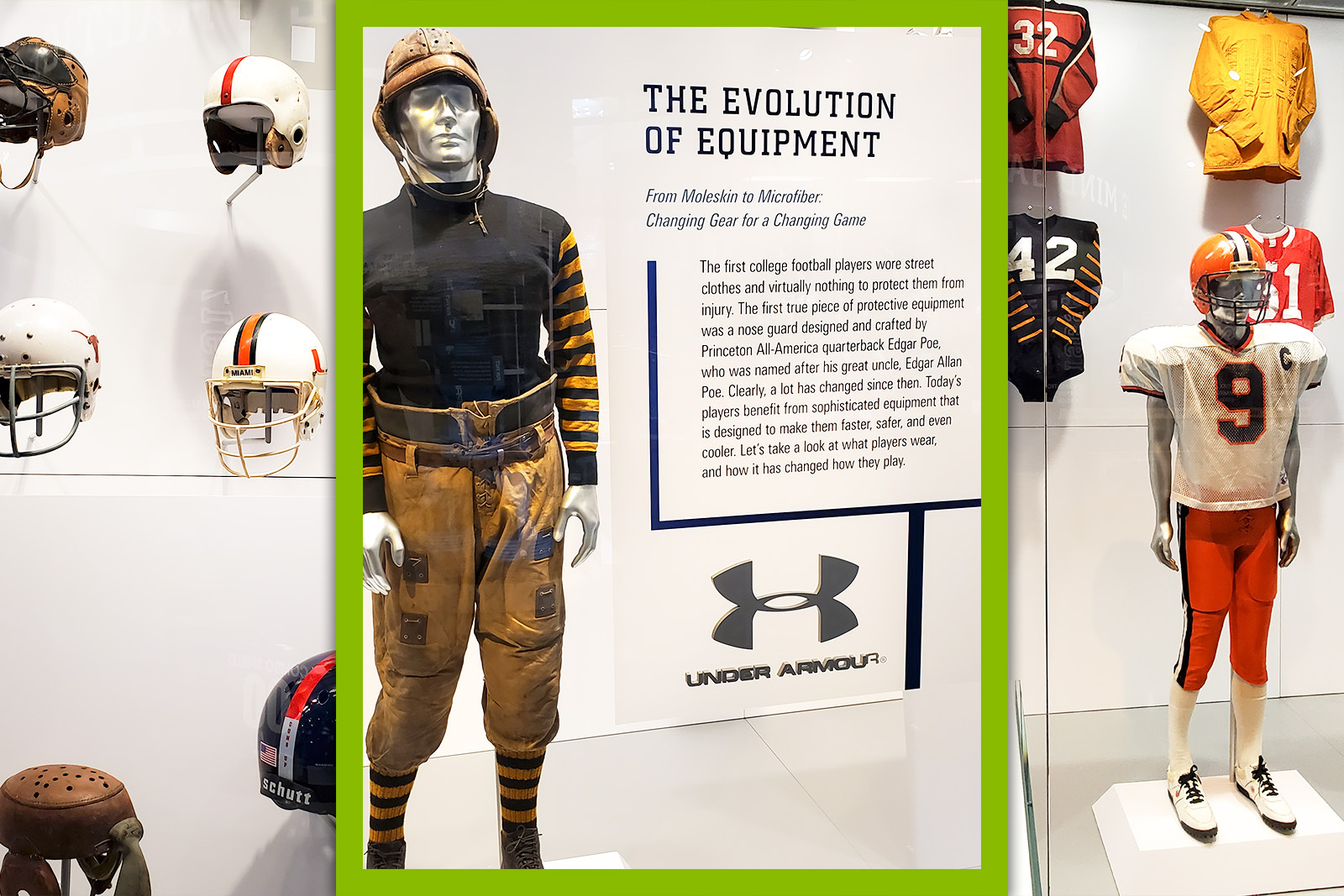 The entrance is called The Quad, and by noon on a school day nearly a third of the 300-plus helmets have already been lit since the gates opened a few hours earlier. As you work your way past the Heisman Trophy and an exhibit of 2020 winner and former Alabama receiver DeVonta Smith, young fans break into a sprint for the Indoor Playing Field, where you can hit a blocking dummy, kick a clutch field goal or catch the game-winning touchdown pass.

And the day has just begun.

For the next few hours, fans are led through the three-story edifice through static and interactive exhibits that recall the game’s storied history and traditions. RFID technology guides you to team-specific exhibits. Take the time to visit the Game Day Theater, where senses immerse with a sea of colors and booming stereo puts you in the middle of a college football Saturday. Fifteen minutes later, you feel you just played for (and won) the conference title. 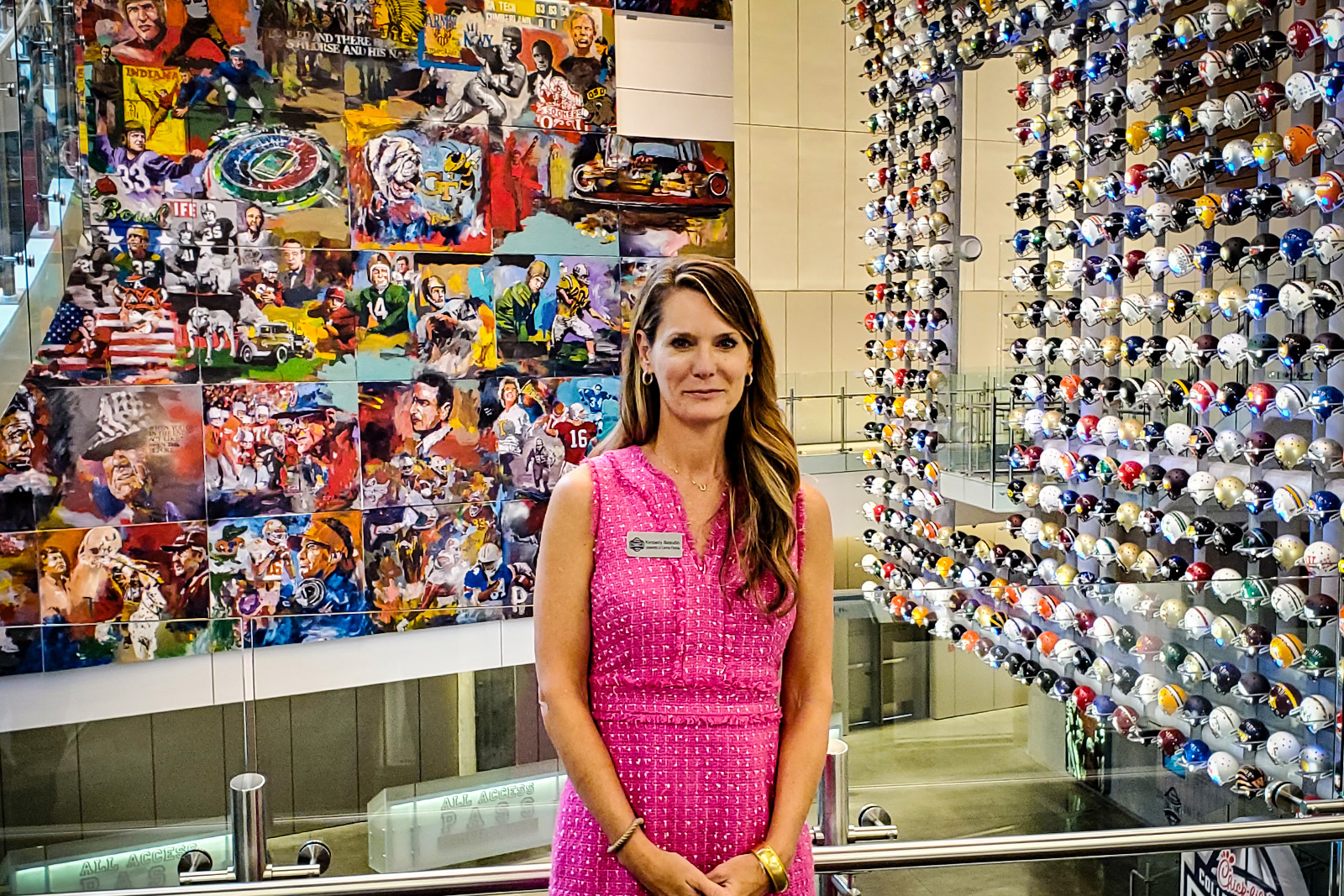 “I love this exhibit. It takes you inside the game, to stadiums across the nation, and lets you feel what the players are experiencing in 4K.”
Kimberly Beaudin, CEO of the Hall

Beaudin first arrived in 2015 as VP of marketing before being promoted to the top post in 2020. Her goal is to not only recognize the game’s greats, but also to provide a blueprint for success for all who enter.

“How can you be a Hall of Fame if you’re not teaching the next generation how to be a Hall of Famer?” she said, noting that so many of the individual athletic accomplishments are accompanied by very personal stories. The message is clear. “How you did it matters as much as what you did.”

The College Football Hall of Fame was founded in 1951 by the National Football Foundation, and it remains one of the most exclusive fraternities in the world. Of the more than 5.1 million players and coaches, only 1,300 have been honored by the hall. In fact, the stringent criteria ensure small numbers. Coaches must win a minimum of 100 games with a .600 winning percentage. Players must be nominated by their school, but after earning first-team All-American status on the field.

The Hall relocated to downtown Atlanta from South Bend, Indiana, in 2014. Located in the heart of the city’s sports, tourism and entertainment district, it’s steps from Centennial Olympic Park, surrounded by the Georgia Aquarium, World of Coca-Cola and the CNN Center. It offers the ultimate game-day experience because it’s within walking distance of Mercedes Benz Stadium, home of the SEC Championship Game, the Chick-fil-A Peach Bowl and a regular stop for the College Football Playoffs.

It’s here, in part, due to Regions Bank.

“Regions financed the Hall when it moved from South Bend to Atlanta,” Linginfelter said. “We were approached by the organizing group, which including Gary Stokan of the Peach Bowl. He came to me and I said we’d be willing to do it.

That support continues with an exhibit called Regions Greatest Moments Theater, which shows archival football of some of the sport’s most historical moments. And it also includes sponsoring luncheons and dinners that feature Hall of Famers such as former Florida quarterback Tim Tebow and Auburn Heisman winner Bo Jackson. 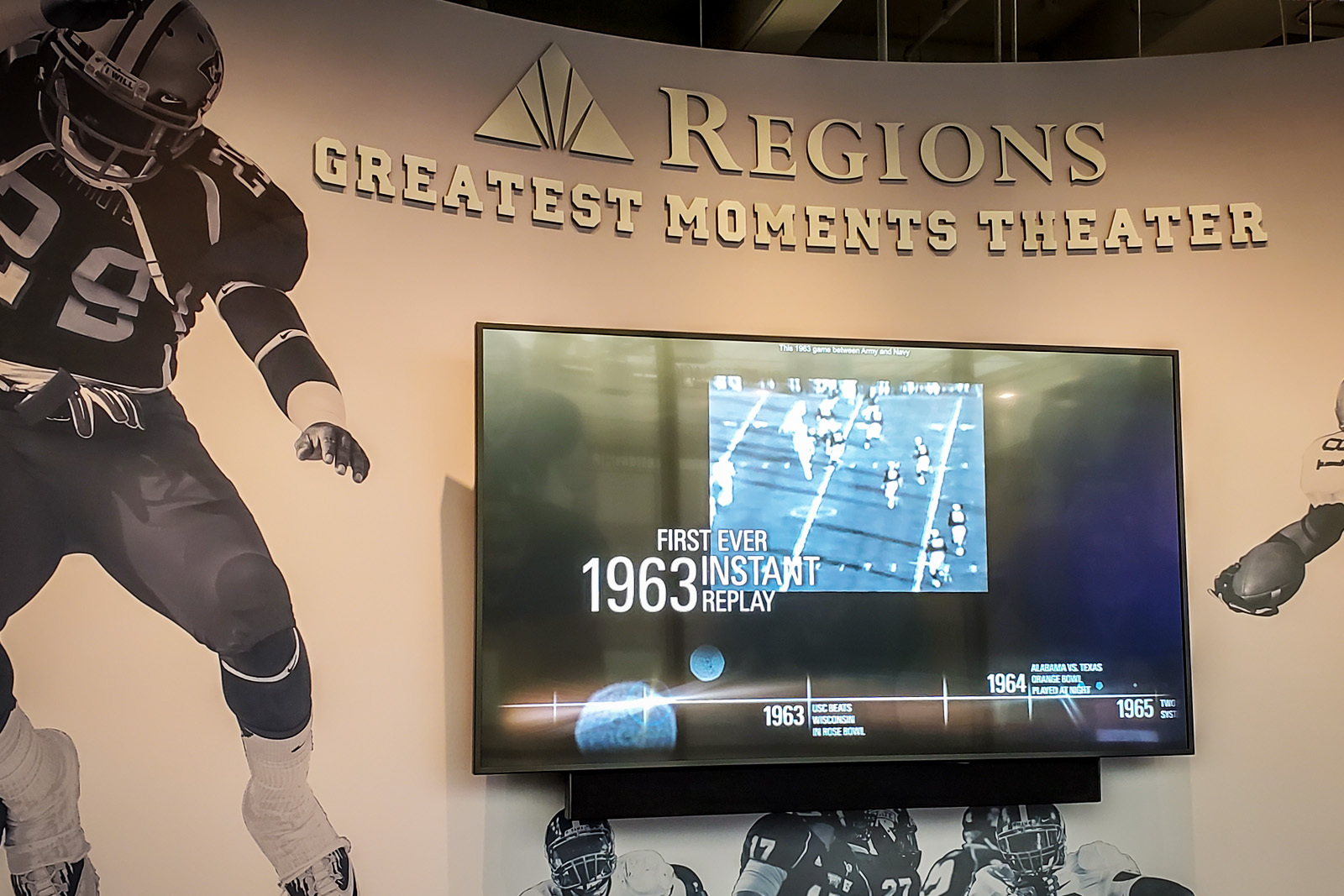 “You couldn’t ask for two better representatives than Tim Tebow and Bo Jackson,” said Linginfelter, recalling how Jackson finished a keynote speech then spent the next 30 minutes in the kitchen of the banquet room signing autographs, posing for photos and thanking the staff for their hard work to pull off the event. “They not only represent the sport well; they represent the best of humanity.”

The Hall is a nonprofit, so corporate support is just as important as constantly turning turnstiles.

“Regions financed the construction and made this happen,” Beaudin said. “It’s been a good relationship. I can’t remember a time when we reached out to include them in something and they didn’t say yes.”

For the past 18 months, though, the Hall experienced hardships that are common across the country due to the pandemic. That impacted attendance.

“It’s been tough,” Beaudin said. “But we took advantage of it to do some refreshing of exhibits, and that’s been effective.”

Two of the latest exhibits heralded the game’s diversity – a history of the game’s integration, which in the South is only a half-century past, and a new one on the rich history of HBCUs.

David Graham, a commercial relationship manager at Regions, played a pivotal role in helping bring the Hall home to Atlanta.

“This relationship is one cherished within the bank and across the city, and I feel a huge sense of pride,” Graham said. “There is so much to do, and each time I enter it brings on chills and great memories. Kimberly Beaudin and her team have a nice balance of engaging exhibits and events, and it is an absolute joy to add value to assist them in achieving their goals.”

“We’re headquartered in Atlanta, the heart of the SEC and ACC, with Georgia Tech just down the street. My vision is for people to recognize us as a national brand. So, we’re leveraging how we tell our story in Washington and California as easily as we tell it in Georgia, Florida and Tennessee.”

Judging by the number of helmets lit for the day, the brand is indeed national. Fans from the West Coast, Northeast and Midwest are represented in the building, as well as a flurry of fans from the Southeast.

After all, a new season is just around the corner. 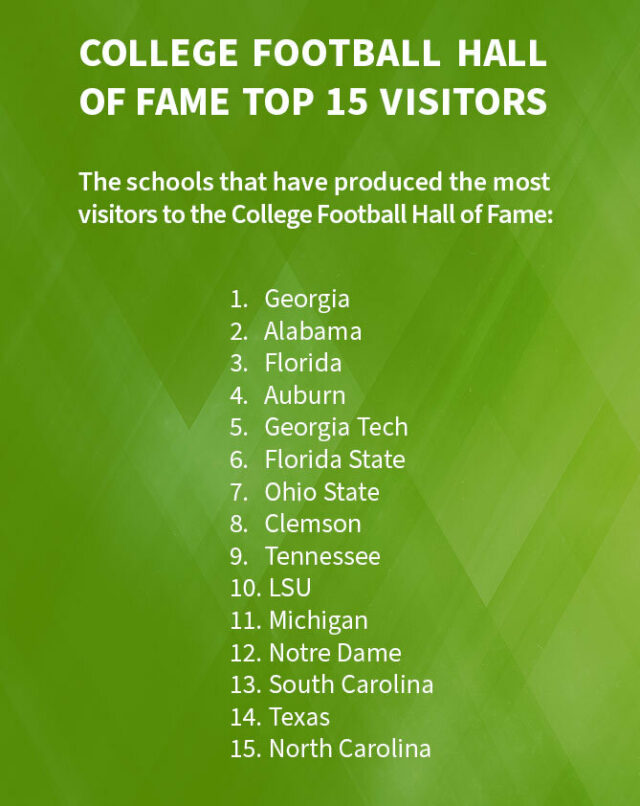