Today, we launch Voices of the SEC, which focuses on the personalities who bring action on the field to your home. As the official bank of the Southeastern Conference, Regions shares a common geography and culture with the people and communities we serve.

Named the Auburn radio play-by-play man just a few weeks before the 2019 opener in Dallas, he opened with a big game broadcasting in the cavernous “Jerry World” – aka AT&T Stadium. 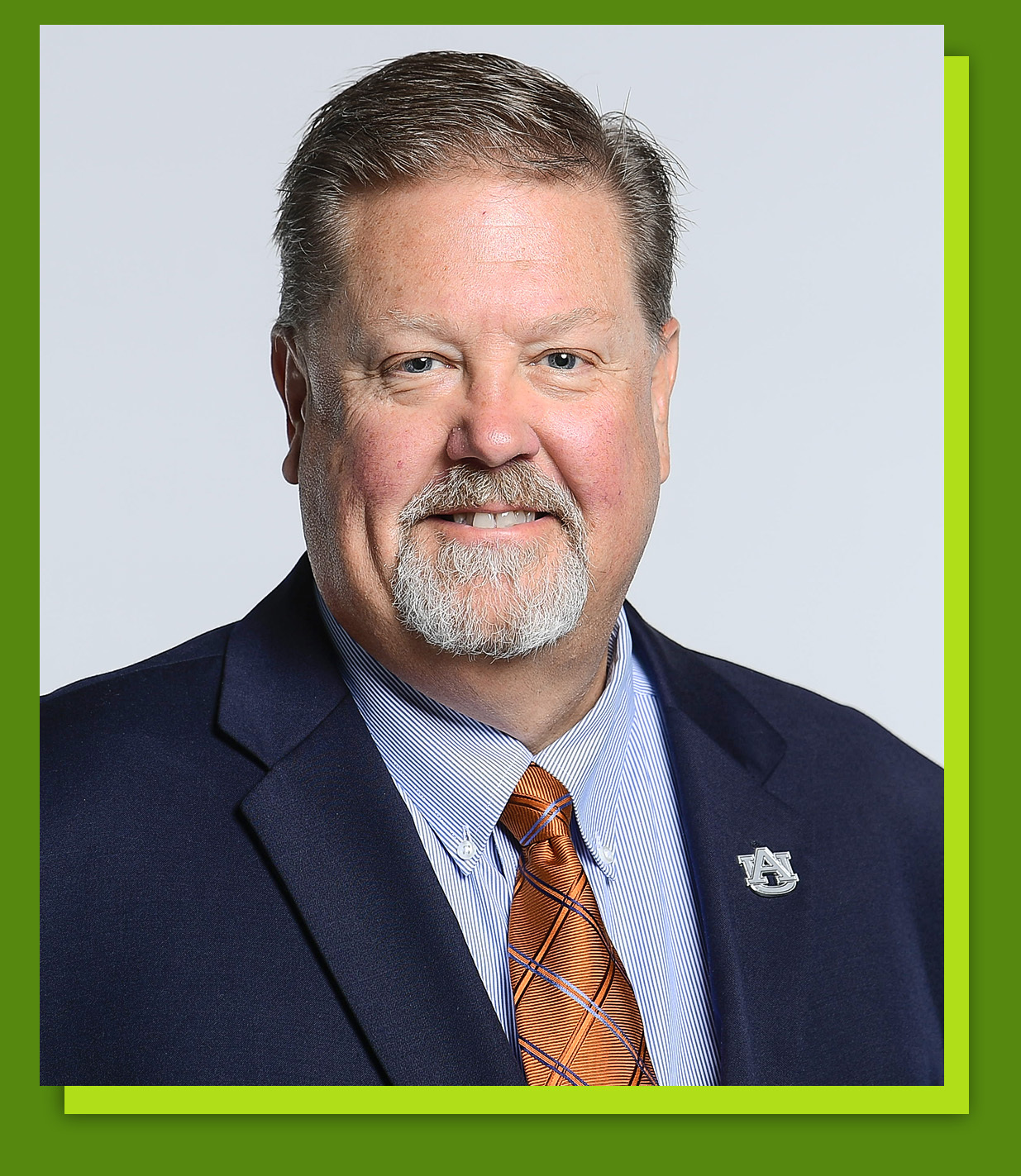 “Stan (White) and I were doing the pregame show from a suite at field level for the first two hours,” Burcham remembered. “Then it was time to move to the press box. Have you ever been at that stadium? It’s huge. And we got lost. We couldn’t find our way to the booth.”

With seconds to spare, Burcham and White, a former Auburn and NFL quarterback who provides color analysis for the Auburn Sports Network, were pointed in the right direction in time to broadcast the game against Oregon. A close call, indeed. Yet something wasn’t right.

“It took me a quarter and a half to find my way (on the air),” Burcham conceded. “Later, my wife, Jan, told me she could tell it was taking me awhile to catch up to the game.”

A seasoned play-by-play man, Burcham was making his debut as the voice of Auburn Tigers football. It was a dream job. Alas, it was one Burcham never hoped to realize.

Just months before, on May 25, 2019, the Burchams were in Huntsville for a niece’s graduation celebration. Back in Auburn, Rod and Paula Bramblett were headed to dinner when a teenager driving at excessive speed with substances in his system crashed into their SUV. The Brambletts were airlifted to hospitals – Paula to nearby Opelika, Rod to Birmingham – but there was nothing emergency physicians could do to save them.

Andy and Rod were best friends and co-workers. And Rod, since 1993, was the beloved voice of the Auburn Tigers.

There was a void in Andy Burcham’s heart, as well as the soul of the Tigers nation.

A circuitous path brought Burcham to Auburn more than 30 years earlier. A native of Nashville, Illinois, he started his career at WMLA Radio in Bloomington, Illinois.  From there he moved to WCIL in Carbondale, a small but respected radio station that had four full-time news reporters and a full-time sports staff.  He cut his teeth covering Southern Illinois games Mike Reis, the longtime voice of SIU  football, basketball and baseball,  served as a mentor. 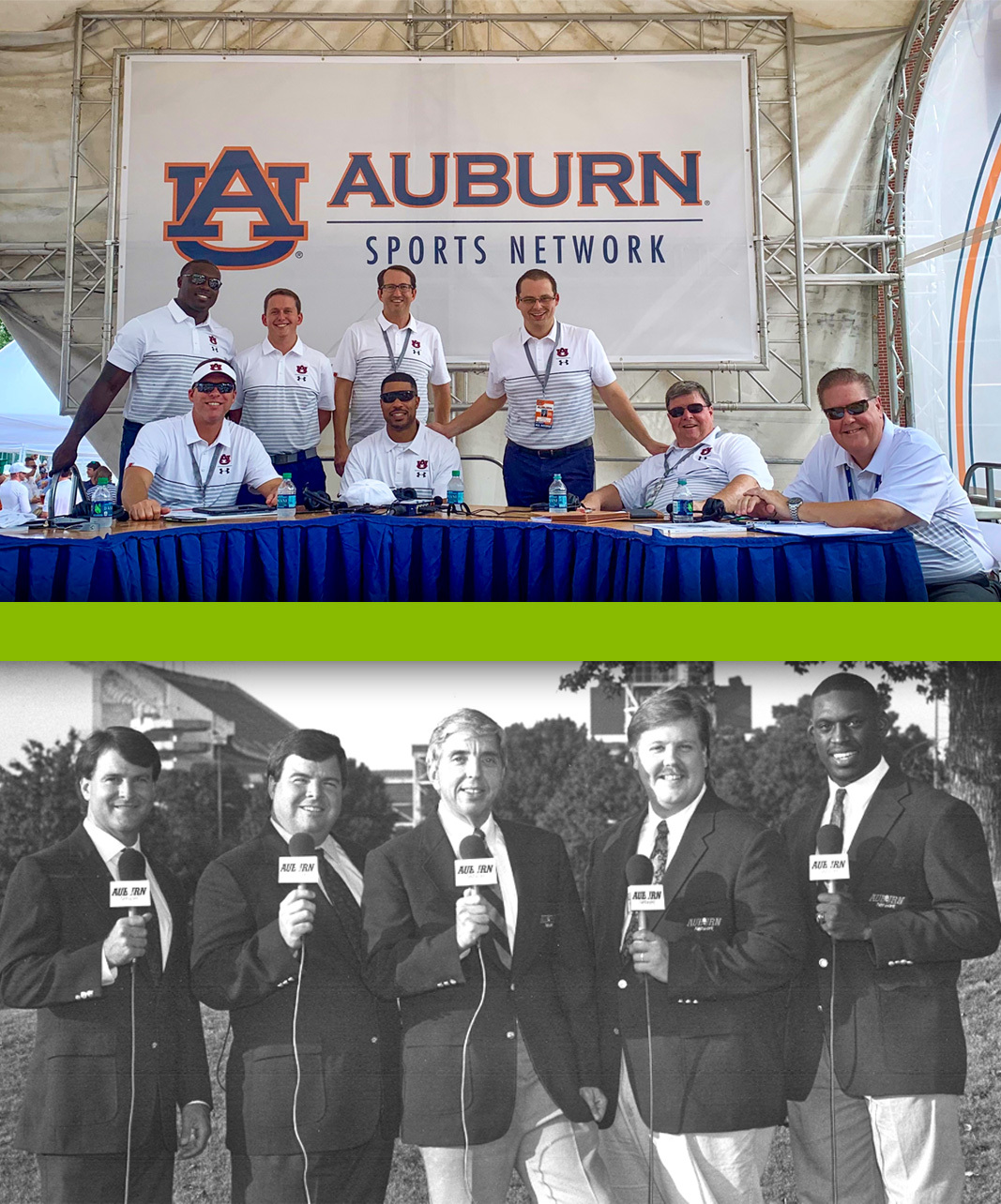 Then fate led him to Auburn, dubbed the “loveliest village on the Plain” by poet Oliver Goldsmith. His first wife was accepted to grad school at the University, and Burcham soon found a job on the radio network covering Tigers women’s basketball. He spent the next two seasons covering a team that rose to unforeseen heights.

“I’ll never forget that trip (to Tacoma, Washington),” Burcham said. “My first two years at Auburn and we’re in the Final Four, playing in the championship game. Joe (Ciampi, Auburn’s women’s basketball coach) and I are friends to this day.”

Another milestone would come in 2003. Now single, Andy met Jan and the match was instant. And his best friend was promoted to the voice of Auburn following the death of long-time Tigers radio icon Jim Fyffe. Bramblett would make his debut in the season opener against a USC program that was primed for a historic run.

“Rod talked about that USC game a lot, about how nervous he was going in,” Burcham remembered. Alas, it would take him – and the Tigers – a few weeks to find their way. USC shut out Auburn 23-0. A week later, Georgia Tech limited Auburn to a field goal in a 17-3 victory.

Burcham’s opportunity would come much sooner. The 2019 opener against Oregon matched up two powerhouse programs. And, as in Bramblett’s debut, Auburn was facing the Pac-12’s best program.

“My first game, Eli Stove scores on a flare for my first touchdown call and we win the game in the final 10 seconds, Nix to Williams,” Burcham said. By then, he was caught up, in the groove. A new era had begun.

Then reality set in as the game ended.

“Taking over for Rob wasn’t on my mind at the time. I was just trying to get through the game. Then, in the second half, I had a sudden tinge of guilt just thinking about Rod.”

1. David Ross’ dramatic, three-run home run in the 1993 NCAA regionals – The baseball Tigers rally from a 7-1 deficit against top seed Florida State to upset the Seminoles 8-7 on the clutch walk-off by the current Chicago Cubs manager. One win later, the Tigers advanced to the College World Series. But this wasn’t Burcham’s call. Instead, it belonged to his best friend, Rod Bramblett.

“This is Rod’s first signature call, and it was incredible,” Burcham said.

“That first trip to Tacoma? Magical. I’d never experienced anything at that level of success before.”

“We get to the booth, guys are tearing down equipment, and Rod, Stan, Quentin and I sit down and just look at each other. Then we all say, ‘Can you believe this just happened?!?’ I’ll never forget that special moment with that group of friends.”

You can’t replace a best friend. Nor can you replace a mother and a father. And in just a year’s time, Andy Burcham was trying to do both – just as Rod and Paula wanted.

On an autumn Friday night, the season before, the Burchams and Brambletts had dinner the eve before a home game as they often did. But Andy and Jan knew something was up.

“In the office that day, Rod had said, ‘I want to ask you something serious tonight,’” Burcham recalled. As dinner progressed, the Brambletts suddenly got serious. “They ask the question, ‘Will you consider being guardians for both of our children?’ They were doing their will, and they wanted to know if we were willing to do this.”

The answer wasn’t immediate. Stunned by the request, Andy and Jan asked for a weekend to consider. Of course, you know the answer.

Just a week before the fatal car wreck, Rod reached out again. “I need both of your full names” for the will.

And then, on a tragic late-May night that shook the entire sports world, that request had to be fulfilled.

The Bramblett’s elder child, Shelby, was already of legal age. But son Josh was 15 and in high school. The Burchams, as promised, stepped up. There would be more responsibilities, including settling the Bramblett’s estate and selling their house. But the biggest task was one they’d never seriously contemplated before.

“We’re not Josh’s parents, and we’ve never tried to replace Rod and Paula,” Andy said. “When we’re together, we talk about Rod and Paula – a lot. We share our favorite stories. Together, we do a lot of things folks would consider parenting. But we are Josh’s guardian. Rod and Paula are his parents.” 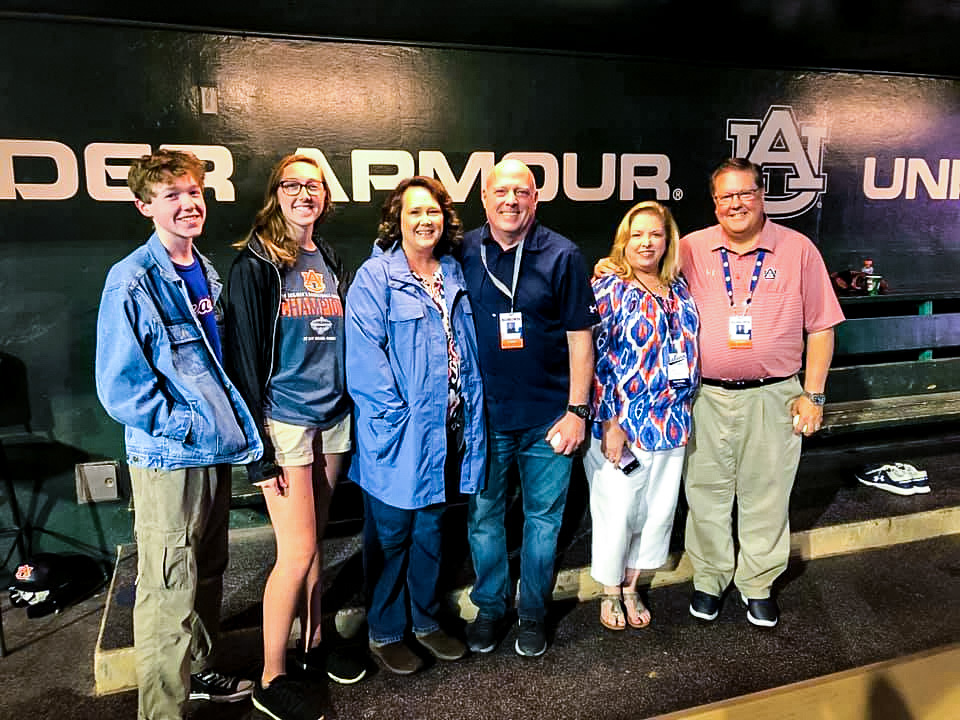 Just as Rod replaced the legendary Fyffe, Burcham’s transition as Voice of the Tigers was seamless. His voice is smooth, his delivery succinct, his narrative flows with the crests and valleys matching Auburn’s fortunes. You can turn on an Auburn game and, without hearing the score, immediately pick up how the Tigers are playing from the cadence of Burcham’s words and the timbre of White’s responses.

“This has been my dream since I moved to Auburn,” Burcham said. “But you don’t ever dream it would happen this way.”