Excerpt from Regions — A Culture of Shared Value:

As one of the largest financial institutions in the nation, Regions Financial Corporation — and its predecessors — has played an important role in the economic growth of a large swath of our country for more than 167 years. Regions has provided untold support to many communities, educational institutions, healthcare facilities, and other businesses that has enabled them to thrive. In return, those same entities have continued to support Regions in a true partnership fashion.

It’s a remarkable story of a strong culture built over time. More than 100 banks and other financial institutions have come together to form what we know today as Regions Financial. Through those acquisitions, and through its expansions into new markets, the company has maintained a steadfast focus on doing what is right for its customers, its communities, its shareholders, and its associates.

It’s a story of a culture built with strong leadership and great values.

Regions has also overcome great adversity through the hard work of its associates and the steadfast support of its customers. Its predecessors survived the Great Depression in the 1930s when many banks failed. No one could have anticipated the Great Recession that began in late 2007 and crippled many other financial institutions. Regions survived and is now thriving because of its culture and the way its associates and its management addressed vitally important issues the company faced. Indeed, Regions is now a stronger company because of what it learned during that crisis.

The strategy developed by Regions for the 21st century and beyond is a point of particular pride. Regions is focused on doing what is best for its customers, putting the priority on a sustainable business rather than short-term gains. Regions emphasizes to its associates the idea of creating shared value: If it’s good for the customers, Regions, and the communities they serve, in the long term it will be good for Regions shareholders.

The Regions that you’re going to read about has a rock-solid foundation with great management, a strong set of values, and associates who believe in its mission of making life better for customers, associates, shareholders, and the communities Regions serves. Those are the things that are necessary for a business to be successful.

We hope that you’ll enjoy reading this important story of Regions’ business and its culture. It’s one from which we can all learn. 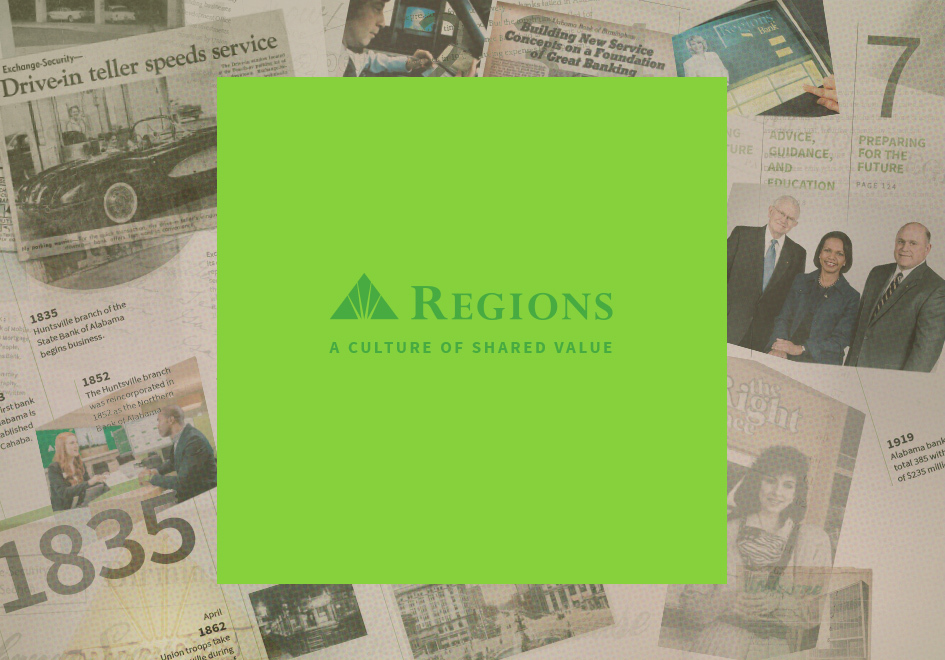