Eli Gold has the job little kids and grown men dream about. As the Voice of the Alabama Crimson Tide, he’s chronicled one of the greatest runs in college football history over the airwaves and into living rooms.

And to think it all began with a simple call in the upper echelons of Madison Square Garden.

“Peanuts! Get your peanuts here!”

Gold’s father died when he was a young teen. For a kid in Brooklyn dreaming of a career behind the microphone, that meant he couldn’t attend many games through conventional means. Money was tight. So, Gold took a job with the Harry M. Stevens Co. to hawk peanuts at New York’s famous indoor arena.

Getting in to see the New York Knicks and Rangers games was the first step. The second was to claim a sales territory no one else wanted.

“I deliberately worked in the cheap seats because that was closest to the press box,” Gold said. “That way, I could meet the broadcasters as they made their way in or on their way out. I was eaten up with the business.”
The grunt work got noticed. He was promoted from peanut vendor to office boy. The drawback: there was no financial compensation. Who cares? He got a free pass to attend any event at the Garden, from Game 7 of the NBA playoffs to the circus to the Royal Lipizzaner Stallions.

Working on his narrative, coming up with the descriptions that he eventually turned into vivid prose for folks back home, Gold honed his craft play by play, day by day, until he got his first break as the radio man for the lowest rung of professional minor-league hockey. 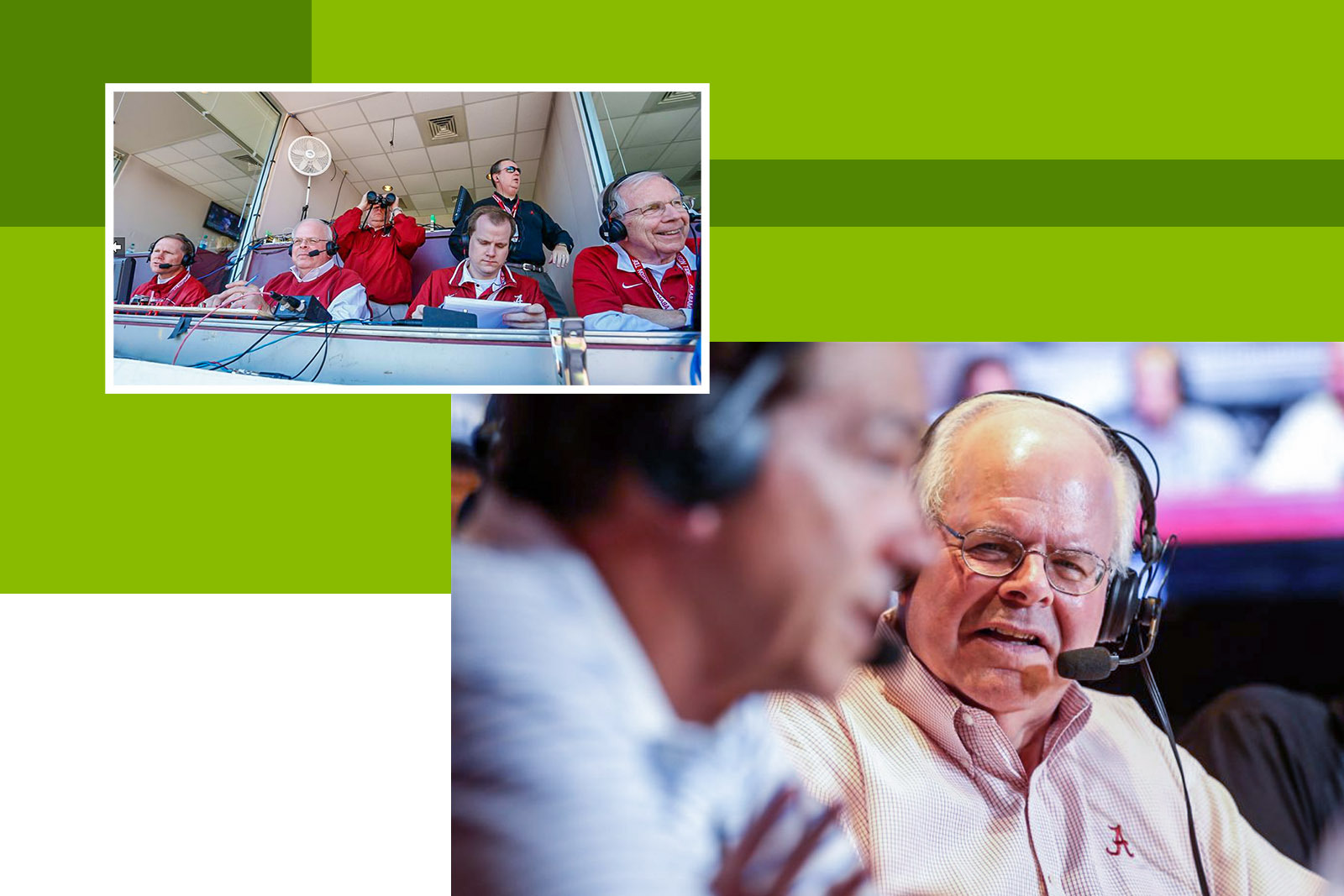 He was willing to pay his dues. He had no other choice.

Then in 1976, as America prepared to celebrate its Bicentennial, Gold had the opportunity to celebrate a new job. Owner John Bassett of the World Hockey Association’s Toronto Toros relocated his franchise to Birmingham, Alabama, and he wanted a new voice to describe the action over the air. By then, Gold was doing the club’s minor-league games, as well as NASCAR coverage for the Motor Racing Network.

The kid from Brooklyn, at age 23, was headed South.

With players like Frank Mahovlich and Paul Henderson, the brawling “Birmingham Bullies” evolved into one of the league’s premier teams. But, just as Gold was beginning to fully hit his stride, the WHA announced a merger with the rival NHL. The Bulls were slated to make the jump, along with the Edmonton Oilers, Winnipeg Jets and two other teams. But Bassett had other business concerns and took a buyout instead.

As the final season came to a close in 1979, NHL general managers and player personnel directors began scouring the league to claim the remnants. And when St. Louis Blues GM Emile Francis attended Bulls games, he was drawn to the voice behind the mic. That led him to offering Gold a chance to broadcast Blues games on television.

Gold was willing to make the leap, provided he could still live in Birmingham.

By then, he was doing Double-A Birmingham Barons games in the summer while christening the first basketball season of Gene Bartow and the UAB Blazers, and he liked the city and the fit.

“I started working with NASCAR when I was still in New York City,” he reminisced.

When I came down here, people knew my name because the listenership in Birmingham for races was high. I had enough of the city – the traffic, the rudeness. I came to Birmingham and enjoyed the wide-open spaces, especially in the 1970s. The people were friendlier. We’d found our home.
Eli Gold, Voice of the Alabama Crimson Tide

Gold continued with hockey, broadcasting a season of the Nashville Predators, as well as NASCAR races over the years. He added NFL radio assignments. And NCAA Basketball Tournament games for CBS, consistently expanding the portfolio.

Prior to the 1989 football season, he received an offer he couldn’t refuse: the football voice of the Crimson Tide. He had already taken over Alabama men’s basketball broadcasts the year before.

One problem. To take over behind the mic, he had to replace a popular local legend, John Forney. While Gold had proved himself for more than a decade, the announcement was met with some hostility – including from one of the Birmingham newspapers.

“There was outrage that Alabama would hire a guy from New York. I had no ties to the university. I was getting ripped to shreds. Thank goodness there was no social media or internet.”

A newspaper columnist pointed out that Gold was so detached from Alabama football that he hadn’t even bothered to attend the previous Iron Bowl, the annual rivalry game with Auburn. What he failed to mention: Gold was in Richmond, Virginia, doing the radio broadcast of a Crimson Tide basketball game that day.

At Legion Field for the 1989 season opener with Memphis State, Gold was noticeably anxious as he took the mic.

You know how that turned out Going into Saturday’s 2021 Iron Bowl, Gold is arguably the most recognizable radio play-by-play man in college football. 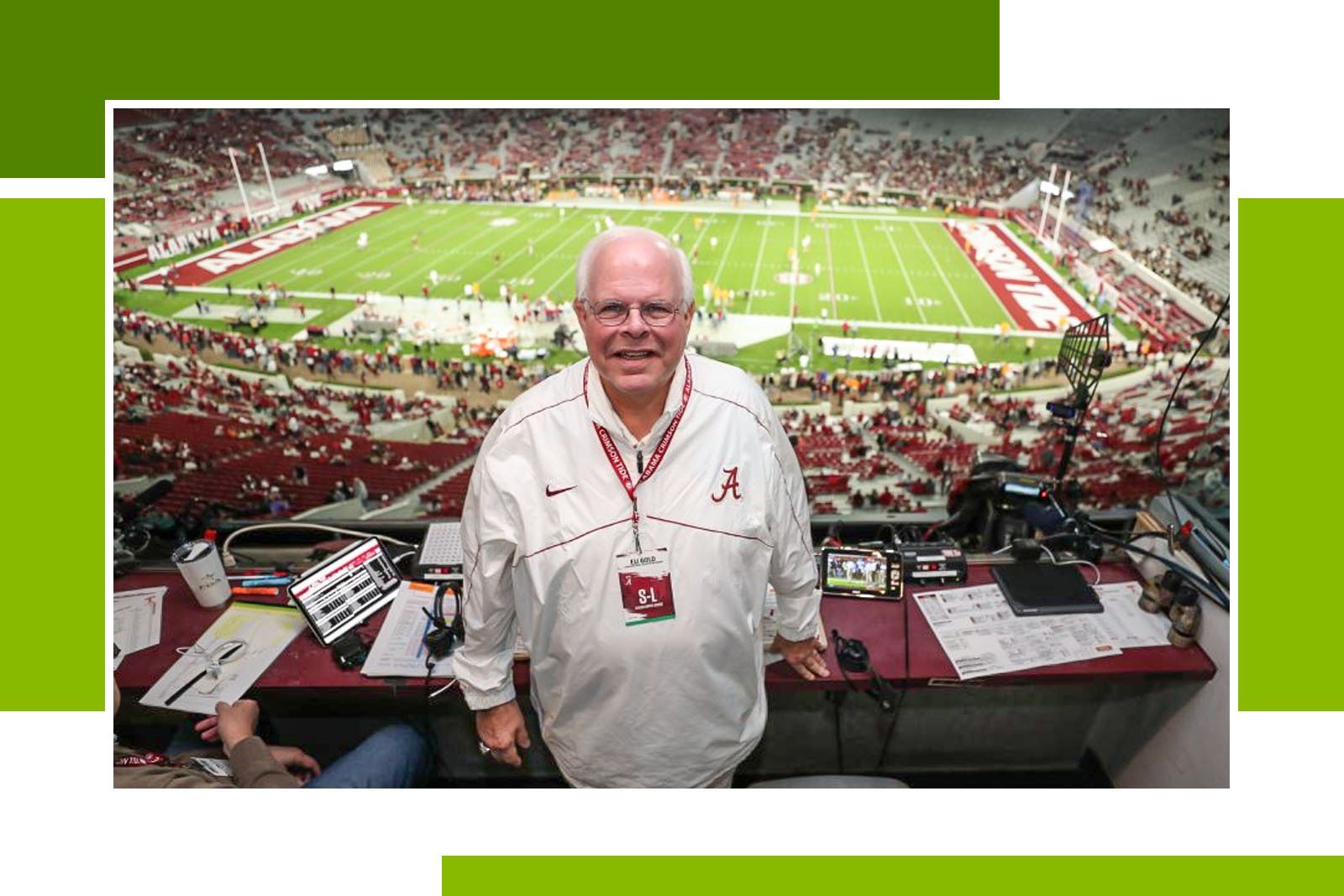 And what a run it has been. Alabama won the 1992 national title under coach Gene Stallings. And, since Nick Saban’s arrival in 2007, has reeled off another six. And counting.

“I pinch myself all the time,” he said. “It’s unbelievable. That’s why I cradle this job with the care of someone cradling a piece of rare crystal. You value it so much, and you have to make sure you never besmirch the job. Being the voice of the Crimson Tide, like Dick Enberg as voice of the UCLA basketball program when John Wooden was coaching, means you must work hard.

Eli Gold’s 5 Most Memorable Calls as the Voice of the Crimson Tide
A few years ago, Eli Gold shared his five greatest calls at Alabama with the staff of al.com. (Video courtesy of al.com)

At Regions, Our Reputation Matters

The Ratings are In

In the End, Georgia Returns to No. 1