Neil Bailey was in a bind, and the frustration was beginning to show.

The manager of the Ole Miss campus radio station was days away from the start of the 1977 SEC Baseball Tournament in Oxford. Only one problem: He didn’t have anyone to call the action over the air. Leaving his office, he yelled out that he needed someone, anyone, to step in quickly.

David Kellum just happened to be there – right place, right time – and said, “I’ll do it.”

Bailey didn’t know Kellum, but assumed he was a University of Mississippi broadcast student. Why not? He was in the building that housed the school’s radio and theatre departments. So, Kellum was hired on the spot. And, within days, he was nervously calling Ole Miss’ 9-7 victory against Vanderbilt.

Except David Kellum wasn’t an Ole Miss student. He was a senior at Lafayette High in Oxford. And he never revealed that until later. Nor did he tell Bailey his experience was limited to his living room, where he practiced calling baseball games on television into an eraser he held in his hand.

“That was my first taste of broadcasting, thanks to practicing with a fat pencil,” said Kellum.

The experience was frightening and surreal, but it led him to a lifetime behind the mic. A year later, he was named the radio voice of Ole Miss baseball, bussing to road games across the Southeastern Conference as a college freshman. Last spring, he concluded his 43rd season in the booth for the nationally respected Rebels program. But he’s even better known as the voice of Ole Miss football, a job he’s held since 1989.

Kellum is known for his preparation, delivery and enunciation, and the ability to bring to life Ole Miss’ greatest athletic moments for fans from Pontotoc to Ocean Springs. In SEC circles, he’s a rarity: the school play-by-play man who grew up a fan of the school where he earned his degree.

And it all started by a one-in-a-million opportunity.

Kellum was visiting his mother, Helen, a well-known figure at Ole Miss and in theatre across the South. She was a professor of Theatre when he was growing up. It was a family calling. A cousin on his mother’s side grew up in Meridian. Sela Ward headed a little east to attend the University of Alabama, where she was a cheerleader, before embarking on her own acting career.

Kellum did some theatre in high school, and often hung out with the drama students at Ole Miss. At one point, he considered following his mother’s career path, even though he was also a good athlete in high school.

“I played five sports in high school, but I realized that I wasn’t going to make a living playing ball,” Kellum said. “Theatre was an option, but sports ended up being my wheelhouse.”

Rebels fans agree: He made the right choice. The high school kid matured into the job and became an SEC legend one memorable call at a time by expanding his roles with the Rebels. He first added women’s basketball to the list, calling the games of a powerhouse program coached by Van Chancellor. As good as the teams Chancellor coached, the road trips were even better.

“Van Chancellor was super successful,” Kellum said. “He got his teams to the Big Dance (NCAA Tournament) just about every year. But he also took his team to games or tournaments in places like Aruba, Hawaii and all over the country.” That point hit home the first season he took over play-by-play of the men’s basketball game. “I remember one time we were in Shreveport to play a game while the women’s team was in Hawaii.”

Before the 1989 season, he was offered the job of calling Ole Miss football games on radio, one of the most prestigious jobs around. But he knew it would likely come at a price. No one did three sports across the calendar. And Kellum was afraid he would have to give up his first love, Ole Miss baseball, in order to accommodate the new schedule.

When Ole Miss athletic director Warner Alford called him into a meeting, he felt the nerves that had surrounded his debut more than a decade earlier. Warner quickly set expectations.

“He told me, ‘You’re not the story, the players and coaches are the stories. I want you to get the score right. And I want to hear the names of the linemen,’” Kellum said, chuckling at the memory. Before becoming the Ole Miss AD, Alford had starred as an offensive lineman on Ole Miss’ 1959 national championship team.

Kellum didn’t bat an eye. “I can do that, but I’ll need a second spotter,” Kellum said, knowing that it’s hard enough for the broadcaster to keep up with the ball and the action. Alford quickly agreed.

When Kellum first started out in football, he was the new kid on the block among venerable legends. Larry Munson was calling games at Georgia, Paul Eels was at Vanderbilt, then Arkansas, and Jim Fyffe was at Auburn. Mississippi State had Jack Cristil. And Jim Hawthorne called the games for LSU. Kellum talked once to another newcomer, Vanderbilt’s Wes Durham, about working in the same profession as those known across the south by their first names.

“Are you intimidated?” Kellum asked.

Yet he was immediately accepted. After all, his mom was still calling him with tips on how to improve his work, just as she did during that first call as a high school student. And in the years to come, he built a rapport with color analyst Harry Harrison by talking “like buddies watching the game together on TV.”

“When we started out, we were the only game in town,” Kellum said. “Your team might end up on television 2-3 times a year. Now, with more TV and livestream broadcasts, there are more ways to follow your team. But fans still tend to gravitate to their person, the guy that’s going to give them the game their way.”

He’s done it so consistently well that the Bleacher Report ranked him among the SEC’s 10 greatest play-by-play announcers of all time. That was a decade ago.

While there have been dozens of memories, there have also been some tough choices.

OK, the choice to let someone else call the 2018 SEC Baseball Tournament wasn’t really that difficult. While the Rebels played their way to the title game in Hoover, Alabama, Kellum opted to stay back home in Oxford for his daughter Staci’s wedding.

How does the daughter of a broadcaster schedule a wedding that conflicts with a popular sports date?

“Honestly, she married Luke, a military man, and wedding dates were limited, so we got stuck,” he recalled. When he heard possible options, he told her to choose the weekend of the SEC Tournament instead of one a few weeks later that conflicted with the College World Series in Omaha.

Seasoned pro Richard Cross filled in behind the mic through the week-long tournament. The wedding went off without a hitch. One final hurdle: The tournament championship game was scheduled for Sunday, a day later. Cross immediately offered to give up his part-time gig so Kellum could get back to work. The veteran voice of Ole Miss said, thanks, but no thanks.

Instead, he and his wife of 41 years, Mary, sat in the stands for the first time since … well, forever, and watched Ole Miss win the title against Texas A&M.

“We hadn’t done that in years and years and Mary and I had a blast,” Kellum said. “What a great weekend: We got our daughter married and also won the title.” 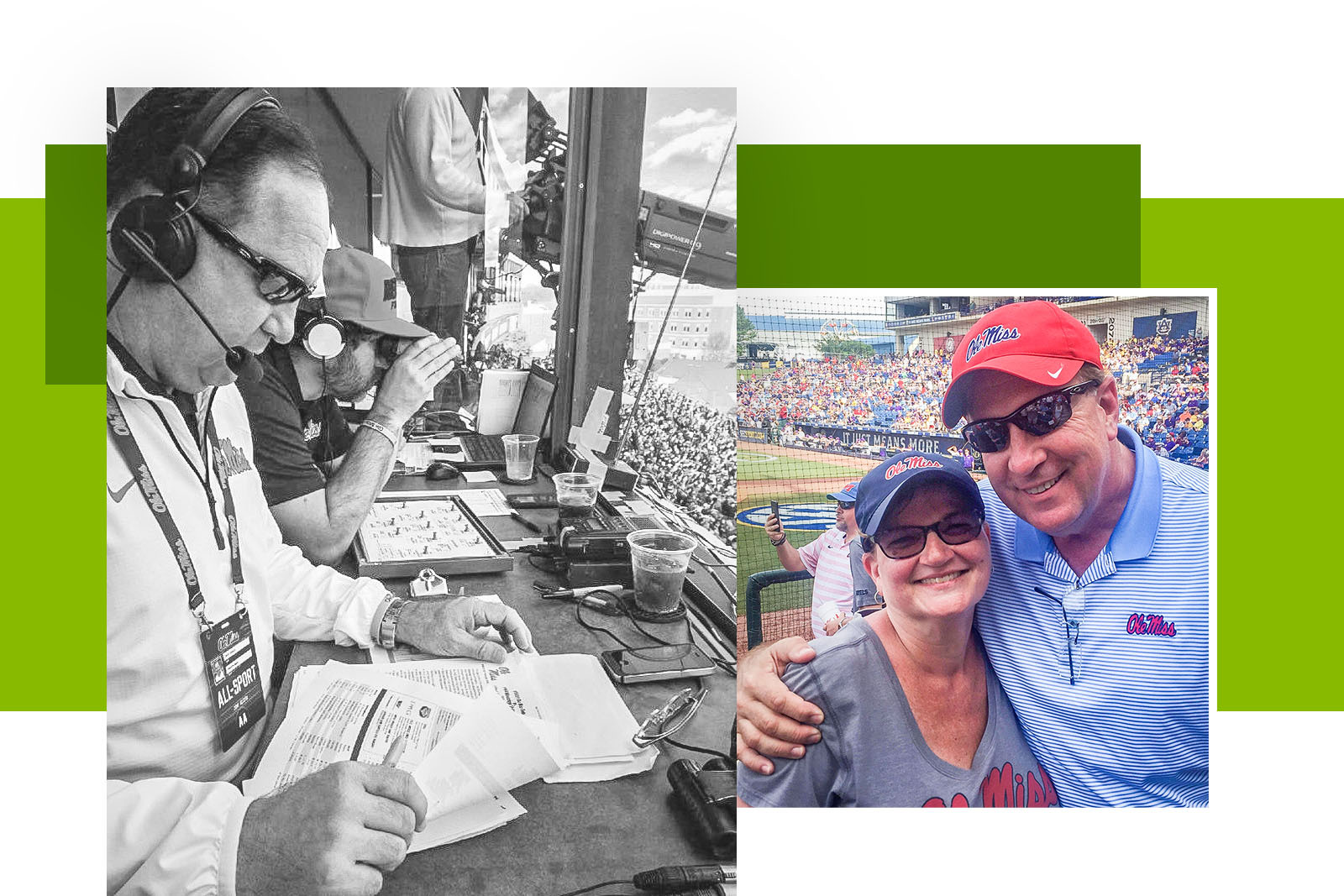