It was a big week for the USCs of college football.

On the West Coast, Southern Cal outlasted archrival UCLA in their annual rivalry game, elevating the Trojans to a ranking they haven’t seen in five years.

And along the East coast, South Carolina stunned Tennessee in a way no one saw coming. That likely ends the Vols dreams of making their first College Football Playoff. 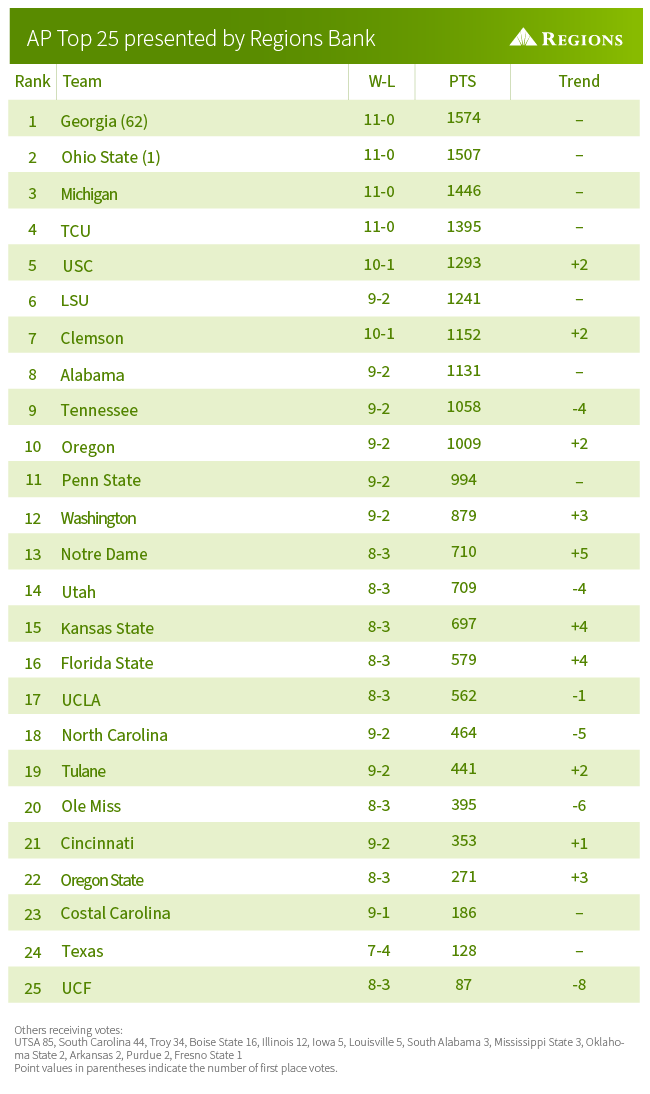 Southern California moved into the top five of The Associated Press college football poll Sunday for the first time in five years.

Georgia received 62 of the 63 first-place votes in the AP Top 25 presented by Regions Bank as the top four teams held their places after playing varying degrees of close games Saturday.

No. 2 Ohio State received the other first-place vote. Michigan was No. 3 again, followed by TCU.

The fifth-ranked Trojans edged up two spots after a thrilling victory against rival UCLA. The last time USC was ranked in the top five was September of 2017, when it started at No. 4 but spent most of the season ranked in the teens before finishing 12th.

Lincoln Riley’s first season as USC coach has produced one of the best turnarounds in the country, with the Trojans going from four wins to 10, and the regular-season finale against No. 13 Notre Dame and a Pac-12 championship game still to go.

LSU stayed at No. 6. Clemson moved up two spots to No. 7. Alabama held at eighth and Tennessee dropped four spots to No. 9 after getting upset in a blowout at South Carolina.

In their 63-38 victory, the Gamecocks scored more points against a top-five team as an unranked team than any in the history of the AP poll.

Oregon rounded out the top 10 after the Ducks beat Utah in the Pac-12′s other marquee game on Saturday night.

Georgia set a school record with its 10th appearance at No. 1 this season. Last year the Bulldogs had nine No. 1s, the most in school history.

Southern California is a top-five team for the 283rd time in poll history. That’s seventh most, 13 behind Nebraska.

The 24th-ranked Longhorns, who started the season unranked, have moved into the Top 25 four times. They haven’t managed to stay there for more than two weeks.

A blowout victory against Kansas pushed the Longhorns back into the rankings as they head toward a season finale against Baylor.

Out
Oklahoma State lost its rivalry game against Oklahoma to drop to 7-4 and out of the rankings again.

Market Outlook: Will 2023 Bring More of the Same?