Oklahoma remains perfect on the season, but another imperfect performance cost the Sooners a spot in the latest AP Top 25 presented by Regions Bank.

Held scoreless in the first half against Kansas – Kansas!?! – the Sooners eventually recovered for the come-from-behind victory. Meanwhile, Alabama turned explosive late to pull away from Tennessee and vault past the Sooners to No. 3 in the latest rankings.

Elsewhere, Oregon jumped three spots to seventh and Ole Miss re-entered the top 10 after a resounding victory against LSU. 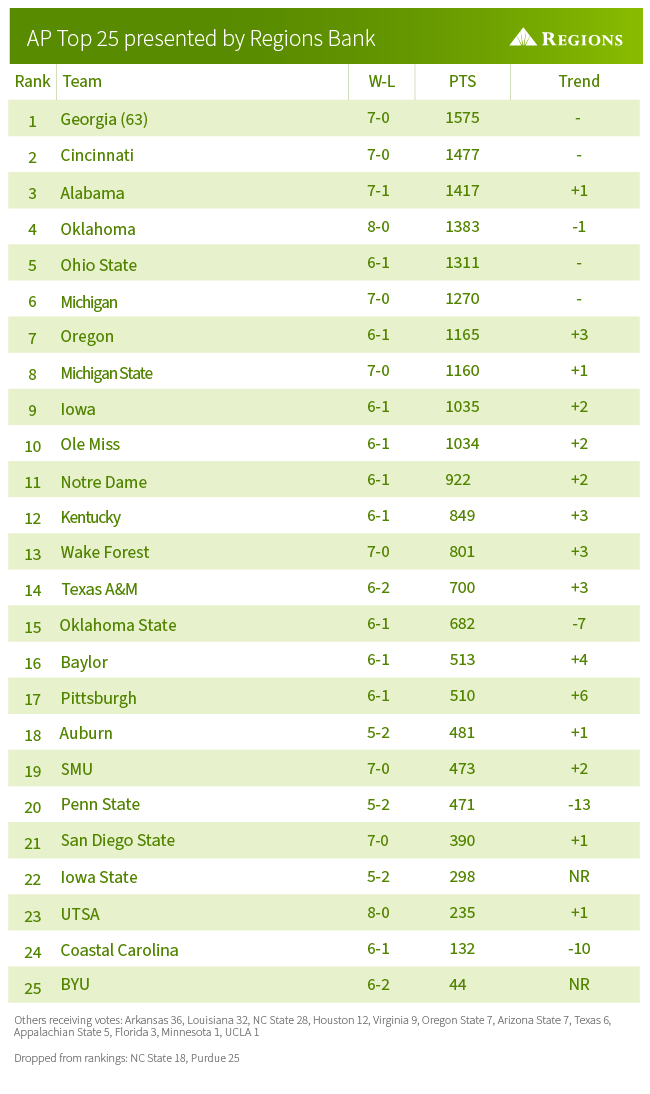 Poll Points
Alabama dropped from No. 1 to No. 5 two weeks ago after losing at Texas A&M, putting its record streak of top-five appearances in danger.

Since then, the Crimson Tide won two games and A&M has built on that upset with two easy victories. The Aggies, unranked when they beat Alabama, are up to No. 14.

The combination of the two has allowed the Tide to run their top-five streak to 69 straight weeks. The second-best top-five streak in poll history came to an end early this season, when Clemson’s was snapped at 57.

The second-best active top-five streak is Georgia at eight weeks.
• No. 10 Ole Miss has its best ranking since finishing the 2015 season at No. 10.
• No. 17 Pitt cracked the top 20 for the first time since starting the 2010 season at No. 15. The last time the Panthers were ranked this high this deep into a season was when they reached No. 8 and finished No. 15 in 2009.

Who’s In
A couple of teams that spent time in the AP Top 25 earlier this season are back in this week.
• No. 22 Iowa State returned after dropping out in mid-September. The Cyclones started the season No. 7 and lost two of their first four games.
• No. 25 BYU broke a two-game losing streak by beating Washington State. The Cougars are 4-0 against Pac-12 teams.

Who’s Out
• Purdue is out after one week in the rankings. The Boilermakers (4-3), who lost at home to Wisconsin, haven’t been ranked for more than one week in any season since 2005.
• NC State slipped out of the rankings after a close loss to Miami

Ranked vs. Ranked This Week
• No. 20 Penn State at No. 5 Ohio State. This will be the sixth straight meeting with both teams ranked, but the Nittany Lions are trending in the wrong direction.
• No. 6 Michigan at No. 8 Michigan State. The first top-10 meeting between the rivals since 1964.
• No. 10 Ole Miss at No. 18 Auburn. Two teams still very much in the SEC West race.