BIRMINGHAM, Ala. – Nov. 25, 2022 – Regions Bank is once again transforming the company’s headquarters tower into Birmingham’s tallest holiday display with its annual Christmas illumination beginning on the evening of Nov. 25, 2022, and lasting through New Year’s Day.

Over the last couple months, crews have been combing through the building making sure roughly 2,500 windows are ready to glow red, green, and white to form the giant Christmas trees, the massive wreath, and the huge stocking that adorn the Regions Center nightly during the holiday season every year. The tradition started over 40 years ago when the building was shared by the former First National Bank of Birmingham and a company called Sonat – or Southern Natural Gas.

“The details on how it all started have been hard to pinpoint, but the story goes that one of the executives for the Southern Natural Gas company traveled to Houston, Texas, during the holidays,” explained Michael Bianca, corporate property relationship manager for Regions Bank. “During that trip, he saw a building that had a similar ‘curtain wall’ design, and that building had a Christmas display created by lights in the windows. He came back to Birmingham and said, ‘We’ve got to do something like that here.’ And that’s what led to the Christmas display that’s been illuminating our skyline during the holidays for over 40 years.” 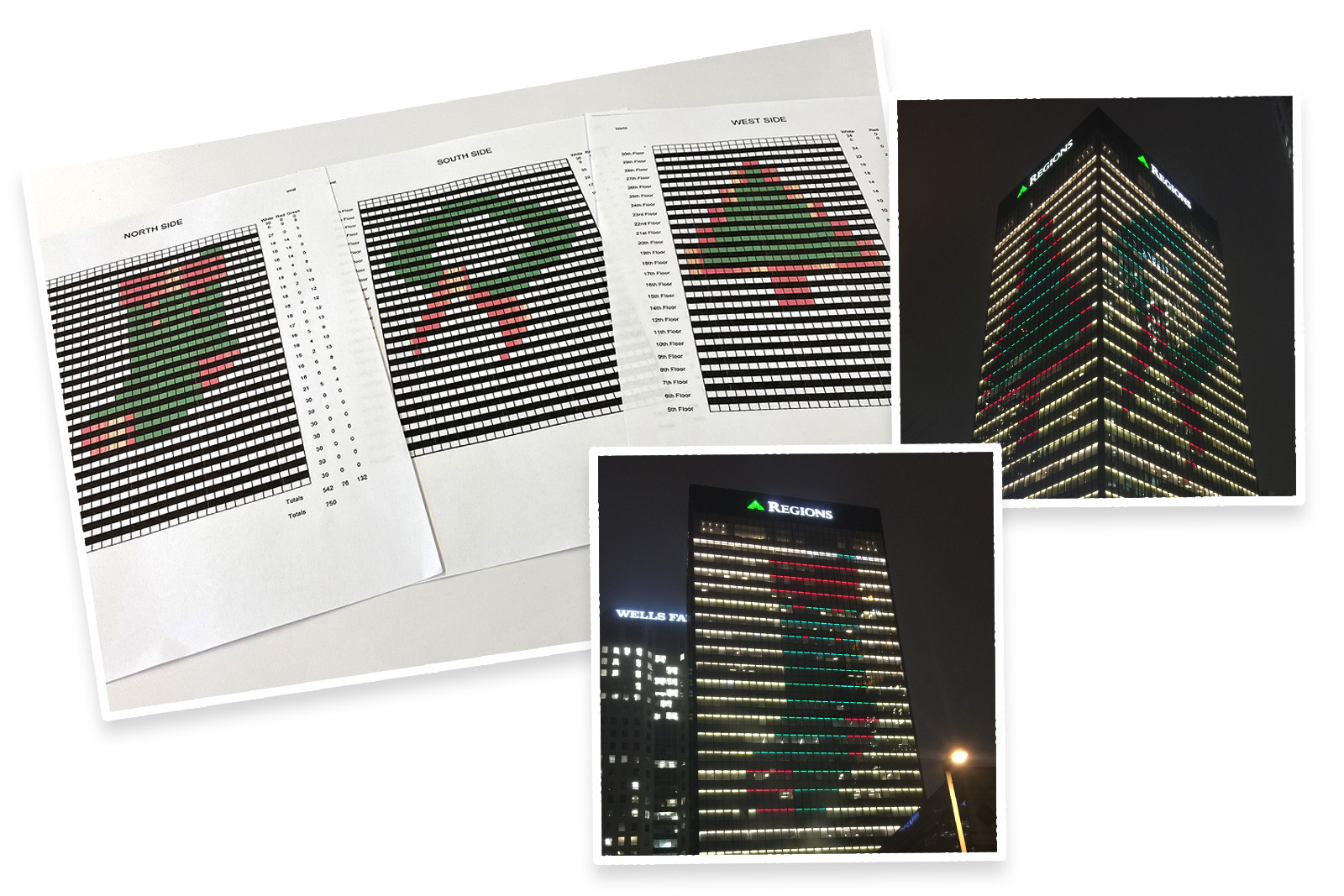 Bianca said people often think the design is created through a high-tech system. It’s not. In fact, the way the display is created each year is nearly identical to the way it was done in the 1970s.

“The building turned 50 years old this year, and what makes the design possible is a feature that was built into the windows before anyone ever thought of using the windows for a Christmas display,” Bianca said. “As the building was under construction, a light tube was placed above every window starting on the fifth floor, all the way to the top. The idea was to have the building displaying bright white light every evening, but the energy crisis of the ‘70s brought those plans to a halt. It was only later that the Christmas display was created, and they were able to use the lights installed above each window to create the images people see from miles away.” 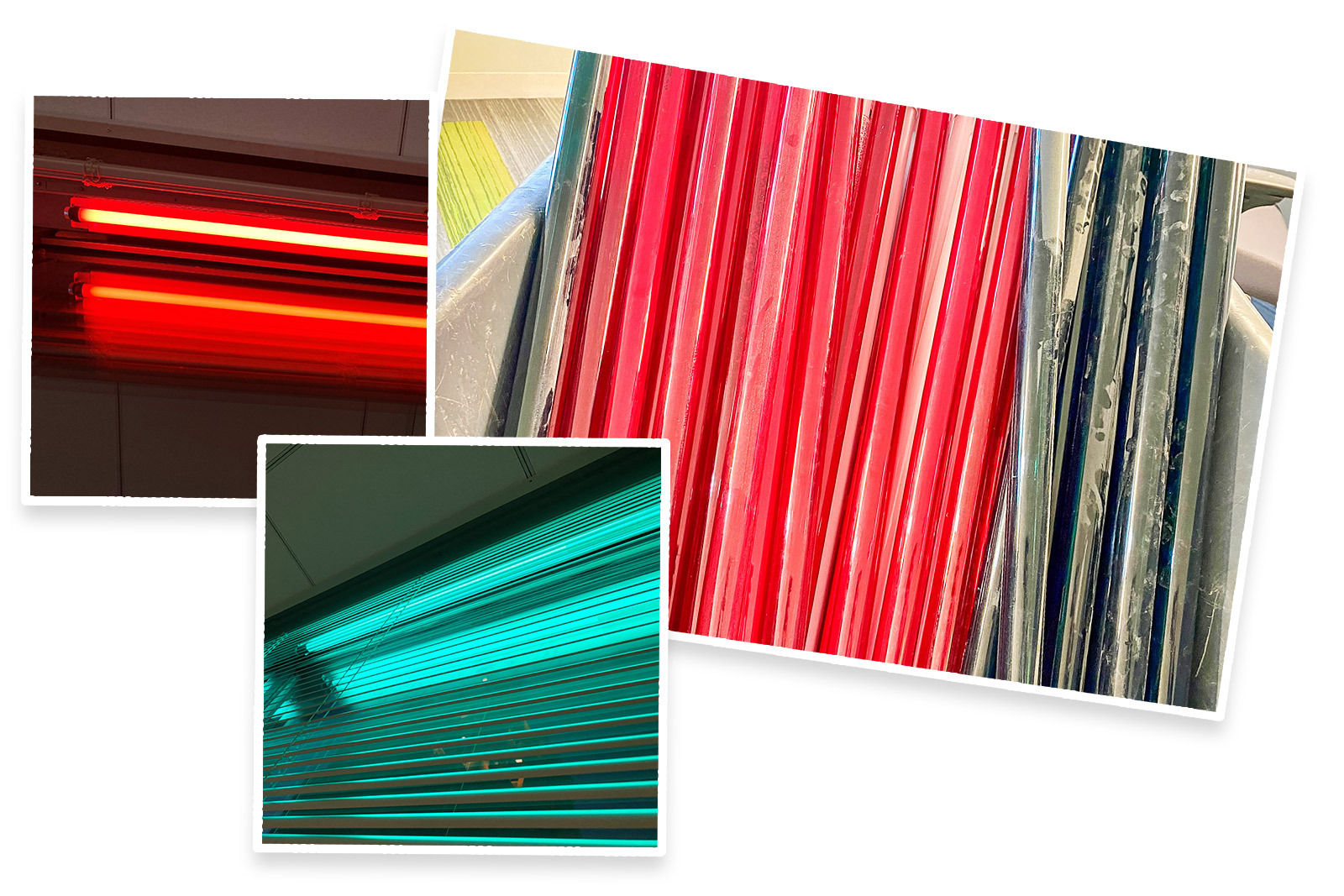 In creating those images, crews place “gel sleeves” over the white lights that need to be changed to red or green to create the Christmas displays. Team members operate with grids showing what each window requires – red, green, or the original white.

Those same crews go through the 30-story building again after the holidays and change the gel sleeves to create the golfer design that is illuminated in the weeks before the Regions Tradition golf tournament every spring. The building also displayed the Olympic Rings when Summer Olympics soccer came to Legion Field in 1996. During the Gulf War in 1991, the building displayed a large illuminated American Flag and the letters “USA.”

“It takes months at a time,” Bianca said, describing the process of installing the gel sleeves and testing each light during the early-morning hours in the days leading to the formal illuminations.

And while it’s labor intensive, it’s worth it. Especially as people share stories of how their holiday celebrations include taking in the Christmas display downtown.

“It’s a real honor for Regions to be part of the Birmingham skyline and to be part of the Magic City’s celebration of Christmas every year,” Bianca said. “This is our headquarters city, and we are proud to carry on this tradition.”

Want to see more of how it all comes together? Be sure to check out this new video from Regions on the company’s YouTube channel.

About Regions Financial Corporation
Regions Financial Corporation (NYSE:RF), with $158 billion in assets, is a member of the S&P 500 Index and is one of the nation’s largest full-service providers of consumer and commercial banking, wealth management, and mortgage products and services. Regions serves customers across the South, Midwest and Texas, and through its subsidiary, Regions Bank, operates more than 1,300 banking offices and approximately 2,000 ATMs. Regions Bank is an Equal Housing Lender and Member FDIC. Additional information about Regions and its full line of products and services can be found at www.regions.com.