It all started on a napkin at Salem’s Diner.

Ed Meyerson and Mike Slive had been friends since the latter moved to Birmingham, Alabama, to take on the role of commissioner for the Southeastern Conference.

Now, sitting in “Mike Slive’s booth” at the popular diner in Homewood, Meyerson was putting the friendship to the test.

“I told Mike I had an idea about starting a prostate cancer research foundation,” Meyerson explained. “No one knew who Ed Meyerson was. But everyone knew Mike Slive. Mike listened to me and didn’t utter a word for 10 seconds. Then he looked up and said ‘If you’re in, I’m in.’”

This year, the Mike Slive Foundation is preparing to celebrate its fifth anniversary as a leader in funding prostate cancer research and raising awareness of a disease that affects one in eight men.

Anna Slive Harwood, Mike’s daughter, serves as the executive director of the foundation. In November, at Beyond Blue: A Benefit to End Prostate Cancer, the foundation will raise money for further research while honoring Meyerson.

“I’m a Type A personality,” Harwood said. “When we got this off the ground, I started helping organize the group. We’ve always called my dad and Ed co-founders. But, it was Ed’s idea to start the Foundation and his idea to engage my father, to use his story and his national contacts to grow the Foundation. Everything that has grown from that first meeting had to do with the vision Ed put together started in that diner.”

A prominent attorney, Meyerson served on the UAB Comprehensive Cancer Board for more than 30 years. He realized that while prostate cancer impacted one in eight men across the nation, there was very little support – especially in the South – for research.

“My dad, who died at 90, was diagnosed with prostate cancer in his early 60s,” Meyerson said. “At that time, they had very mediocre quality of treatment. He went through severe radiation treatment and scarring that affected his quality of life for 30 years. My goal was to make sure my grandsons never went through that.”

Slive, with a national reputation and a longtime friendship, proved to be the perfect ally. And Slive also understood Meyerson’s vision, having been diagnosed with prostate cancer while at the peak of his career. He passed away at the age of 77 in 2018 after a recurrence led to complications.

So, on that napkin, they sketched out a board, a mission and set realistic goals.

“We ran out of room on that napkin very quickly,” Meyerson said.

Together, the two brought on Dr. Edward Partridge, the former executive director of the UAB Comprehensive Cancer Center. Hoover Mayor Frank Brocato said yes. So did Joel Rotenstreich, the philanthropist who was a key figure behind the Birmingham Holocaust Education Center. 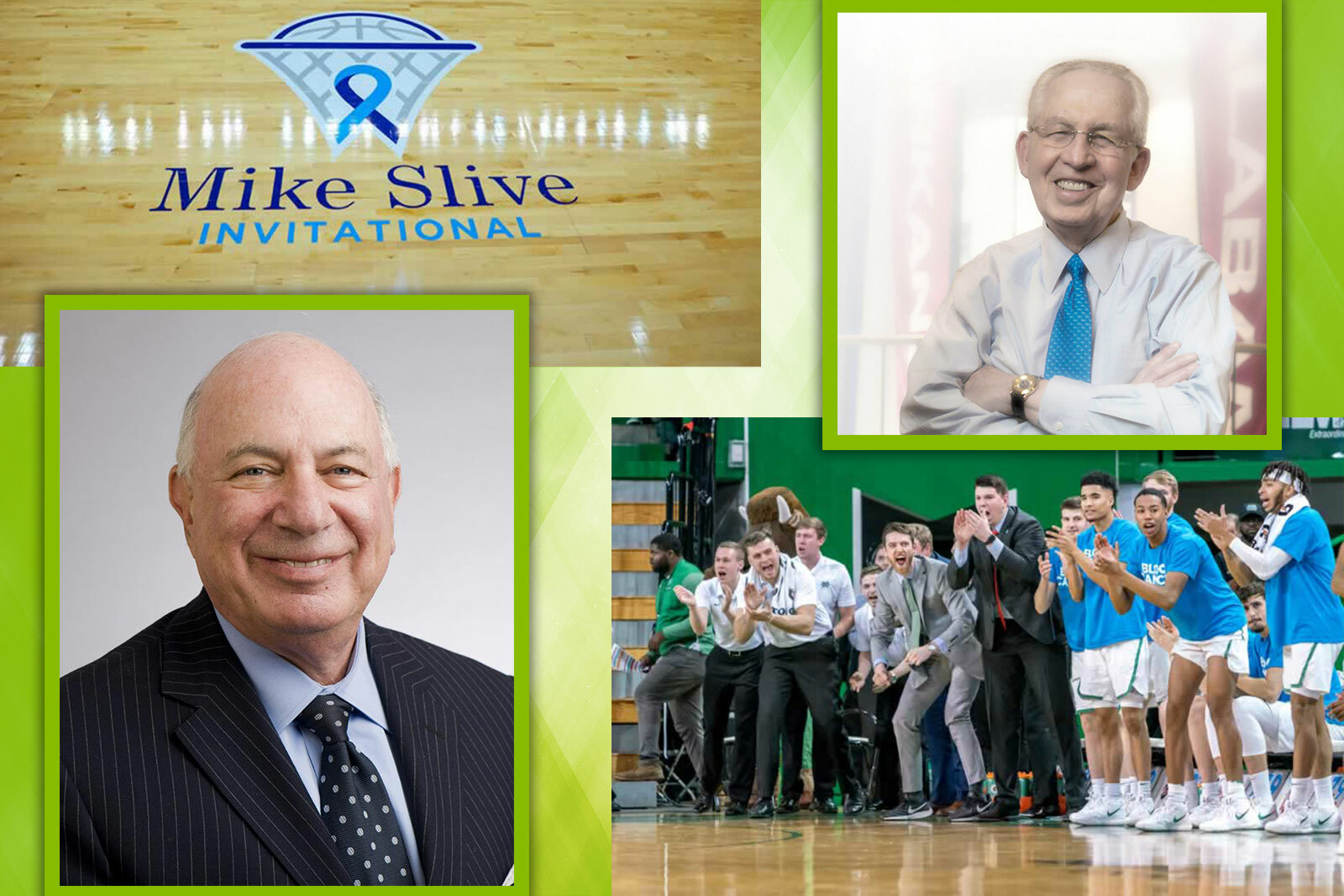 The next step was to find businessmen who could serve as catalysts for fund raising for new research. Charlie Perry said yes to the Mike Slive Foundation.

And then they turned to Slive’s daughter.

“We’re so fortunate to have Anna,” Meyerson said. “I know Mike would be really proud of his daughter, her leadership, and how she has envisioned what he created on that napkin.”

The support would continue to grow. Support would come from Dr. Jeffrey Nix, a noted urologist and researcher. Perry would call on two other prominent businessmen — Tommy Brigham and Hatton Smith, who had played pivotal roles in bringing back UAB football – to help raise money.

There’s no cure yet, but research has increased tremendously. And there are fundraisers that are on everyone’s calendar: Beyond Blue, I’m with Mike 5K and and high-profile college basketball games.

When Auburn basketball coach Bruce Pearl was approached to get involved, he committed to the Mike Slive Invitational. Then, with Kentucky’s John Calipari, Pearl and other coaches, to something bigger: Block Cancer.

And some saw their lives changed.

Before some games, prostate cancer screening was available. “At the Mike Slive Invitational, we identified 12 positive PSA tests that were aggressive enough that the patients were told they needed immediate medical attention. Literally, that was lifesaving,” he added.

Her father’s legacy remains one of the greatest in college athletics. His name continues to resonate for those pushing to cure the disease. But Anna Slive Harwood will always be grateful for Ed for having the idea and helping to build such a solid foundation for this organization to grow.

“The pace of change, the way things are changing, is incredible,” she said, “and that’s really good news. Ed’s goal is by the time his grandsons grow up they’ll never have to worry about prostate cancer. That’s our goal too!”

You could save a life just by banking. Here’s how:

For the next two months, Regions will support the Mike Slive Foundation with a donation of up to $25,000 through $1 donations for qualifying online and mobile banking transactions. Each new qualifying transaction will help make a difference, thanks to an agreement between Fiserv and Regions Bank