Ice cream is the treat of summer. It’s cold and refreshing on a hot day. It’s a source of fond memories – such as family birthday celebrations or trips to the ice cream shop, where children gaze with anticipation into the glass-topped freezers, asking for samples of everything in sight and then choosing for themselves the flavors and toppings they want.

For Amanda Wise, ice cream represents more than memories. It represents a victory. She cried tears of joy the first time her oldest son, Shawn Jr., was able to enjoy it.

Shawn Jr. goes by Shawnee. He’s overcoming a lot as he grows up. Shawnee has autism spectrum disorder (ASD).

He is mostly nonverbal and has sensory challenges when eating cold foods. He typically prefers hard, crunchy foods, and experimenting with what he eats posed a serious challenge – and then, a chance to celebrate.

“When Shawnee tried ice cream for the first time, I learned to never put limits on what he could do,” Amanda Wise said.

Shawnee’s victory that day, and others he’s achieved since then, came as a result of therapy from the Scott Center for Autism Treatment.

The Scott Center has a three-fold mission of clinical service, research and training. Based at the Florida Institute of Technology in Melbourne, the clinic and its personnel are dedicated to helping improve the quality of life for children with ASD and related disabilities. Families from across the country turn to the center for support. 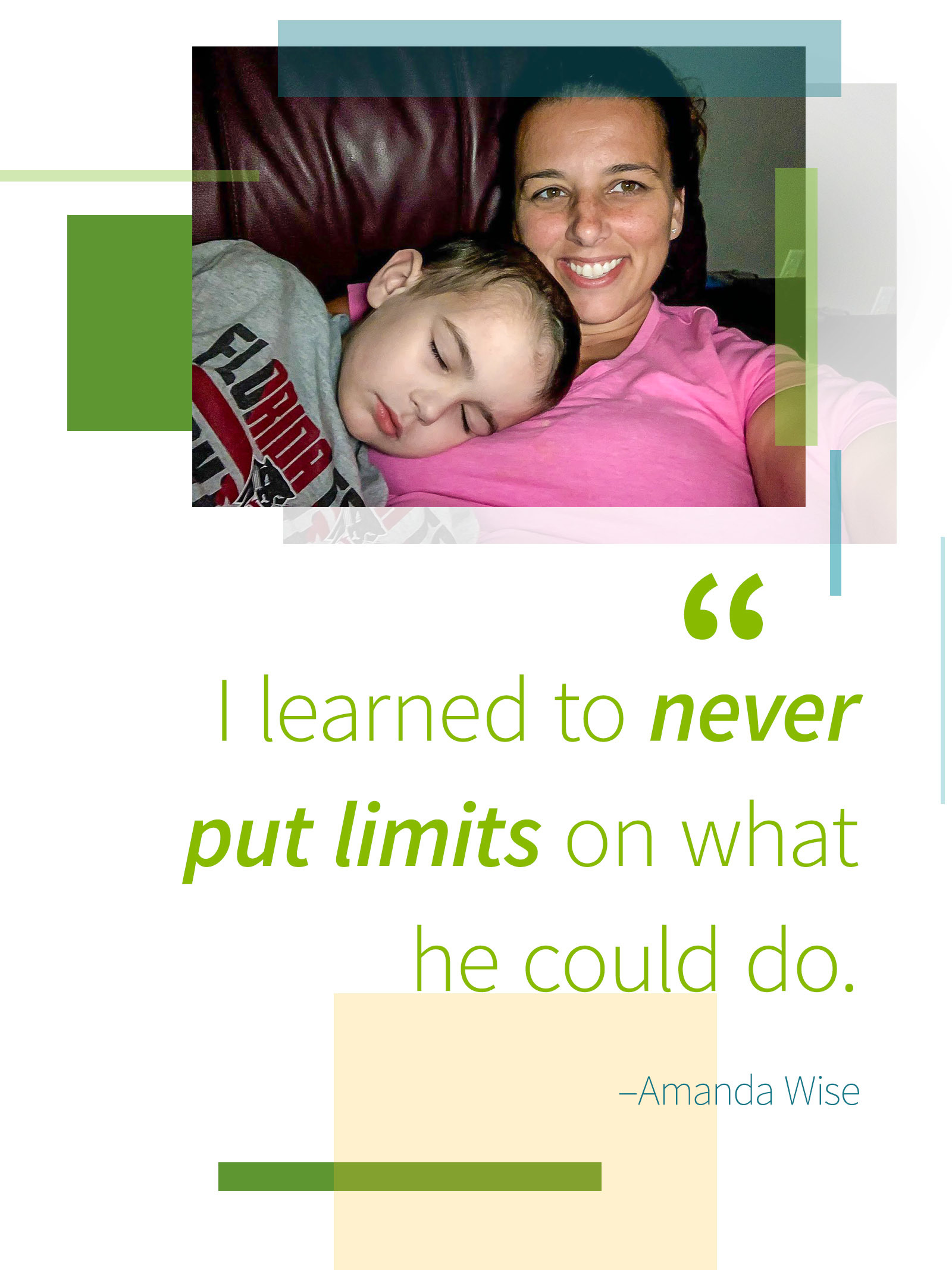 In June, the Scott Center was one of 11 nonprofits featured in Regions Bank’s What a Difference a Day Makes contest. The monthlong campaign was part of Regions’ celebration of the 30th anniversary of the signing of the Americans with Disabilities Act.

During the contest, visitors to Regions’ news website learned about how each participating nonprofit serves people and families affected by ASD. Eligible voters could vote once per day for their favorite. Voters turned out in record numbers.

In the final days of the contest, the Scott Center pulled ahead – finishing first with tens of thousands of votes. While all nonprofits in the contest will receive volunteer service and financial support from Regions, the Scott Center’s first-place finish earns the top prize, a $5,000 grant.

Chris Hurst, market executive for Regions in Central Florida, said the enthusiasm for the Scott Center was a testament to how the nonprofit’s work means so much to families.

“The Scott Center’s win is a victory for everyone in Central Florida,” Hurst said. “At a difficult time in our lives dealing with COVID-19, this campaign became a bright spot and an opportunity to come together, support the Scott Center and help make a difference for people and families affected by autism. Everyone has a connection to autism in some way, and it was an incredible rallying effort that helped bring nearly 30,000 online votes of support for the Scott Center.”

Shawnee was diagnosed early with autism after his mom noticed he was missing major milestones in development. The screening and therapy Shawnee received through a federal program expired when he was only 2 years old, right when his diagnosis was complete. Wise turned to the Scott Center to confirm the autism diagnosis and begin therapy.

“Learning about autism and living it are two very different things,” Wise said. “When it finally hit me that he had autism, I had a deep cry. It was a mourning cry with deep sadness. I knew autism could be a very isolating journey.”

But after the tears came determination. And progress. From both Amanda and Shawnee.

Everyone has a connection to autism.
Chris Hurst, Central Florida market executive for Regions

At the Scott Center, Shawnee made incredible leaps in development. Within the first week, he was learning sign language and could request to play with bubbles. With speech therapy, Shawnee is learning to speak and express emotions.

The center’s feeding services helped him learn to try different foods. His palate has grown from hard, crunchy foods and ice cream to include peanut butter and jelly sandwiches and chicken nuggets.

His favorite request? Starbucks’ Madeleine French butter cakes. After all he’s accomplished, his mother is happy to oblige.

“The Scott Center has given us so much,” she said. “Every child with autism is different, so the Scott Center works with the unique needs of each child – and each family – to create a treatment plan just for them. Shawnee wouldn’t be where he is today without the Scott Center. Their team has created a better world for Shawnee.”

“The What a Difference a Day Makes campaign has really raised the level of awareness of what the Scott Center does every day,” said Courtenay Porter, director of external relations for the Scott Center “It is the gift that really keeps on giving.”

Shawnee is headed to kindergarten soon and will use his foundation from the Scott Center to build on his progress.

Every victory along the way is sweet. Perhaps none more so than that day when Shawnee and his family discovered there were no limits to what he could do.

To learn more about Regions’ work to support families with autism, check out these stories below.

Innovation for Today. And Tomorrow

‘We’ll see our neighbors through.’

Regions Honored as Lender of the Year by EXIM Bank