Three weeks into the 2021 college football season, one thing is abundantly clear. Everyone is vulnerable.

The Crimson Tide survived a scare at The Swamp. Oklahoma held off Nebraska in a reunion of the “Game of the Century” participants. And fellow preseason favorites Clemson and Ohio State continued to underwhelm.

Meanwhile, Penn State survived two late upset bids from Auburn in an intersectional primetime showdown, beating the Tigers 28-20 to climb four spots to No. 6 in the latest AP Top 25 presented by Regions Bank.

The Nittany Lions weren’t the only mover and shaker. BYU climbed eight spots to No. 15 after back-to-back victories against ranked Pac 12 foes. And Michigan State, Fresno State and Kansas State joined the party after more impressive results. 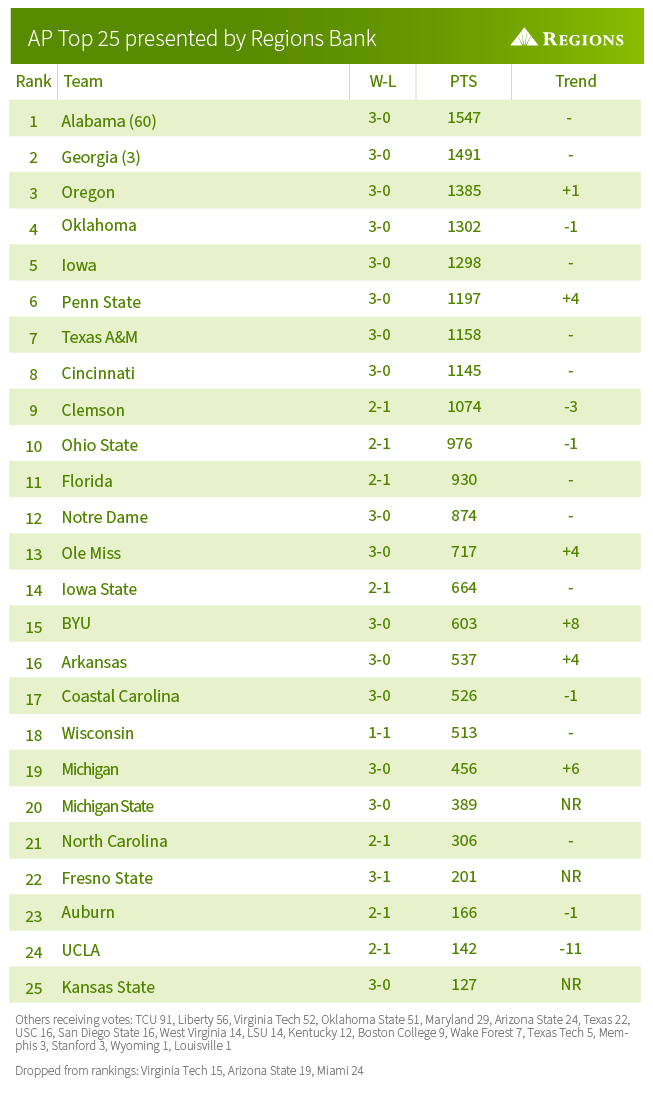 MORE FROM THE AP

Poll Points
• Six ranked teams lost Saturday, though none in the top 10, raising to 19 the total number of ranked teams to lose through the first three weeks of the season.
• The number is padded by 10 ranked teams losing to ranked teams. Also, only one top-10 team has lost to an unranked team: North Carolina was preseason No. 10 when it opened with a loss to Virginia Tech.
• It has been a volatile first few weeks of the 2021 season, though not quite as unpredictable as it might look at first glance.
• A total of 35 teams have been ranked through three regular-season polls.

Who’s In
• No. 20 Michigan State is off to an impressive start in Year 2 under coach Mel Tucker, 3-0 by an average margin of 22 points. The Spartans won 38-17 at Miami on Saturday and are ranked for the first time since Oct. 5, 2019.
• No. 22 Fresno State won maybe the weekend’s most thrilling game, upsetting UCLA with two late scoring drives led by quarterback Jake Haener. The Bulldogs are ranked for the first time since the final AP Top 25 of 2018.
• No. 24 UCLA dropped 11 spots after its first loss of the season.
• No. 25 Kansas State is off to a 3-0 start after beating Nevada 38-17. The Wildcats were ranked briefly in 2020 and then stumbled to a 4-5 finish.

Ranked vs. Ranked This Week
• No. 12 Notre Dame vs. No. 18 Wisconsin at Soldier Field in Chicago. Toughest test yet for an Irish team that is unbeaten but far from perfect.
• No. 7 Texas A&M vs. No. 16 Arkansas at AT&T Stadium in Arlington, Texas. The last time this was a ranked matchup was 2016.

Voices of the SEC: David Kellum

Cincinnati Climbs to No. 2 in Latest AP Rankings

Tide Takes No. 3 After Oklahoma Struggles

Creating a Culture of Inclusion: A Fireside Chat