Ohio State and Alabama returned to the top 5, USC tumbled and Troy entered the AP Top 25 presented by Regions Banks for the first time this season – and the second time in school history.

More important for the Buckeyes, they also climbed in the final College Football Playoffs rankings, earning a first-round matchup with top-ranked Georgia. Michigan and TCU will meet in the other national semifinal.

A wild 2022 regular season concluded with a weekend of conference championship shockers, following a chaotic trend that began on opening day. 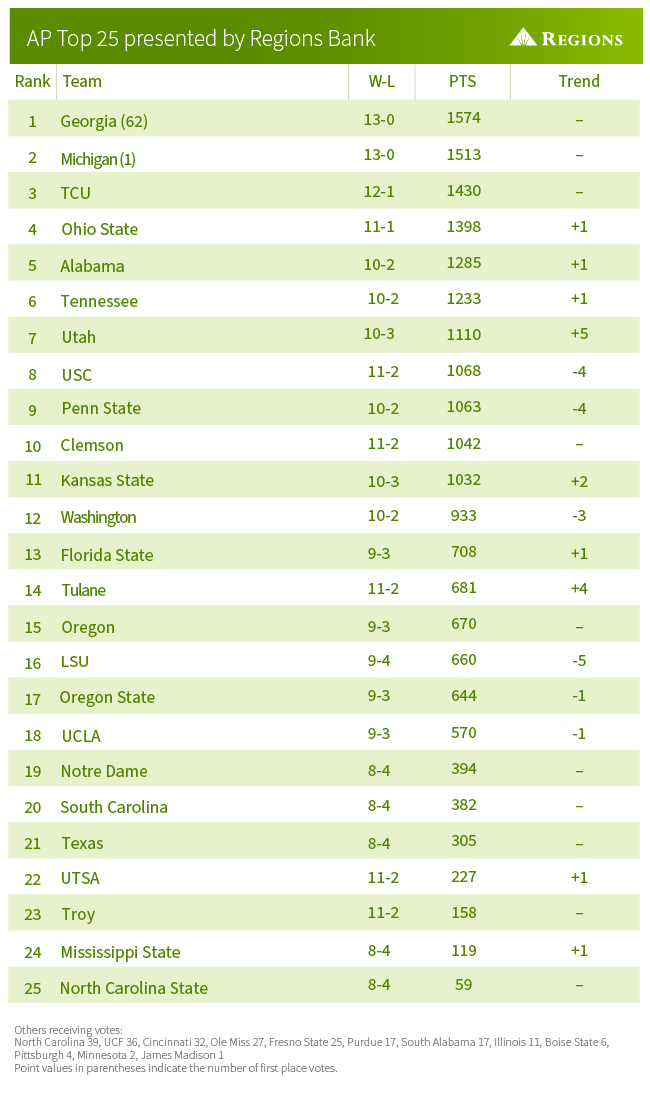 Georgia, Michigan, TCU and Ohio State were the top four in the final Associated Press college football poll of the regular season.

The Bulldogs (13-0) are No. 1 for the ninth straight week and 12th time this season in the AP Top 25 presented by Regions Bank. Georgia received 62 first-place votes and Michigan (13-0) received the other one in the poll released Sunday.

TCU (12-1) remained third, despite losing for the first time this season in the Big 12 title game on Saturday. The Horned Frogs lost in overtime to Kanas State.

The Buckeyes moved up a spot to No. 4, ahead of Alabama and Tennessee.

Utah was No. 7 after beating Southern California in the Pac-12 championship game. The Trojans slipped four spots to No. 8.

Penn State was ninth and Clemson stayed at No. 10 after winning the Atlantic Coast Conference title.

Tulane reached a season-high 14th after winning the American Athletic Conference and Troy made its season debut at No. 23.