Rivalry week lived up to the hype with four top 10 teams falling on the final week of college football’s regular season.

The biggest shakeup in the AP Top 25 presented by Regions Bank was in the Big Ten, where Michigan climbed to No. 2 after throttling Ohio State. Elsewhere, TCU remained perfect, and Penn State and Washington earned their highest rankings of the season at eighth and ninth, respectively. 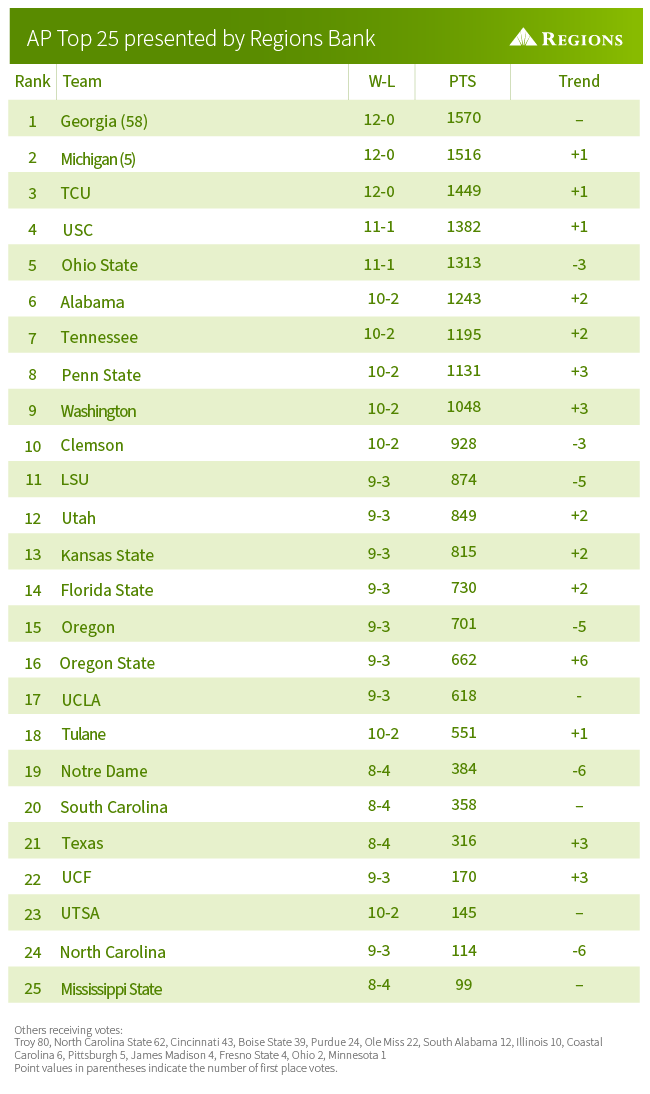 Michigan moved up to No. 2 in The Associated Press college football poll Sunday, with TCU at No. 3 and Southern California at No. 4 behind top-ranked Georgia after four top-10 teams lost on the final day of regular-season games.

The Bulldogs (12-0) are No. 1 for the eighth straight week and 11th time this season in the AP Top 25 presented by Regions Bank. Georgia received 58 first-place votes and Michigan received the other five.

The Wolverines (12-0) reached a season-high No. 2 after beating Ohio State, which dropped the Buckeyes three spots to No. 5.

Other top-10 teams to fall were LSU, Clemson and Oregon. LSU’s loss to Texas A&M dropped those Tigers five spots to No. 11. Clemson’s loss to South Carolina sent it falling three spots to No. 10 The Ducks’ fourth-quarter collapse against Oregon State cost Oregon a spot in the Pac-12 title game and five spots in the poll, where it fell to No. 15.

Alabama was No. 6, just ahead of Tennessee, which beat the Crimson Tide on a last-second field goal at home earlier this season.

No. 8 Penn State and No. 9 Washington both have their best rankings of the season. The Huskies haven’t been in the top 10 since the 2018 season, when they peaked at No. 6.

This was the eighth regular-season week since 2017 where four top-10 teams lost, including the second this season. Three of those weeks occurred in 2017.

The last time five or more top-10 teams lost in the same regular-season week was 2016.

Texas-San Antonio became an FBS school in 2012. The defending Conference USA champions peaked at No. 15 last season and will head into a second straight C-USA title game ranked.