PHOTOS COURTESY OF THE WORLD GAMES 2022

Before she took her first leap from the belly of a plane, Sarah Breese was told it would be life changing. So, she smiled politely at the hyperbole.

“It was 100 percent life changing in the best ways possible,” she said as she scanned the sky outside Barber Motorsports Park Saturday. “I gained a family of people. The skydiving community is unlike anything I’ve ever been a part of, and I’ve been an athlete all of my life.”

A four-letter winner in high school and collegiate swimmer, the Cleveland, Ohio resident found herself on the outskirts of Birmingham, Alabama over the weekend for The World Games 2022 to see the competition’s inaugural Canopy Piloting event.

She had a vested interest – her boyfriend, American Justin Price, is the one of the world’s premier jumpers.

Before a riveted crowd, aerialists take the leap of faith from above the massive speedway, descending faster than the speed limit toward a small target surrounded by bleachers and racing Porsches to skim a short strip of water and land on a dime.

Chuck Akers is president of the United States Parachute Association, so he is on hand to see the world come to Birmingham. And, like Breese, his interest is personal.

Akers is a gregarious veteran jumper himself. But don’t overlook the fact that the calm demeanor is a façade for this Texan.

In waves of three, canopy pilots from Poland, Germany and Italy take flight to the delight of the crowd, landing in succession to clear the way for a new wave of skydivers from South Africa, Brazil and the USA.

They make it look easy, slicing through the air, skimming the surface and nailing perfect landings. But for the World Games, they’re facing one of the most difficult courses ever created.

“This course is high level,” Akers explained. “It’s so challenging that they had to change the rules just for The World Games. You’ve got 60-foot trees on either side, which causes depth perception problems. And the wind above the tree line is another problem altogether.”

On a steamy Saturday afternoon, it’s even more unpredictable before the pilots drop below the tree line into a new wind tunnel. The current wave of divers has only a couple of hours to get their jumps in before heavy thunderstorms that produced flash flooding roll in, postponing the rest of the day’s competition.

But the risk is worth the exposure. The divers come from all walks of life. Price, for instance, works with SkyDive Arizona, which boasts itself the world’s largest center of its kind. He’s also part of PD Factory Team, an elite jump team. And, as a side gig, he trains U.S. special forces in HALO jumping   — high altitude military jumping from altitudes above 15,000 feet using oxygen tanks.

Akers first gained interest in skydiving as a child when he noticed the guy living across the street departed the house every Saturday with a parachute over his shoulder before driving off in a Corvette. 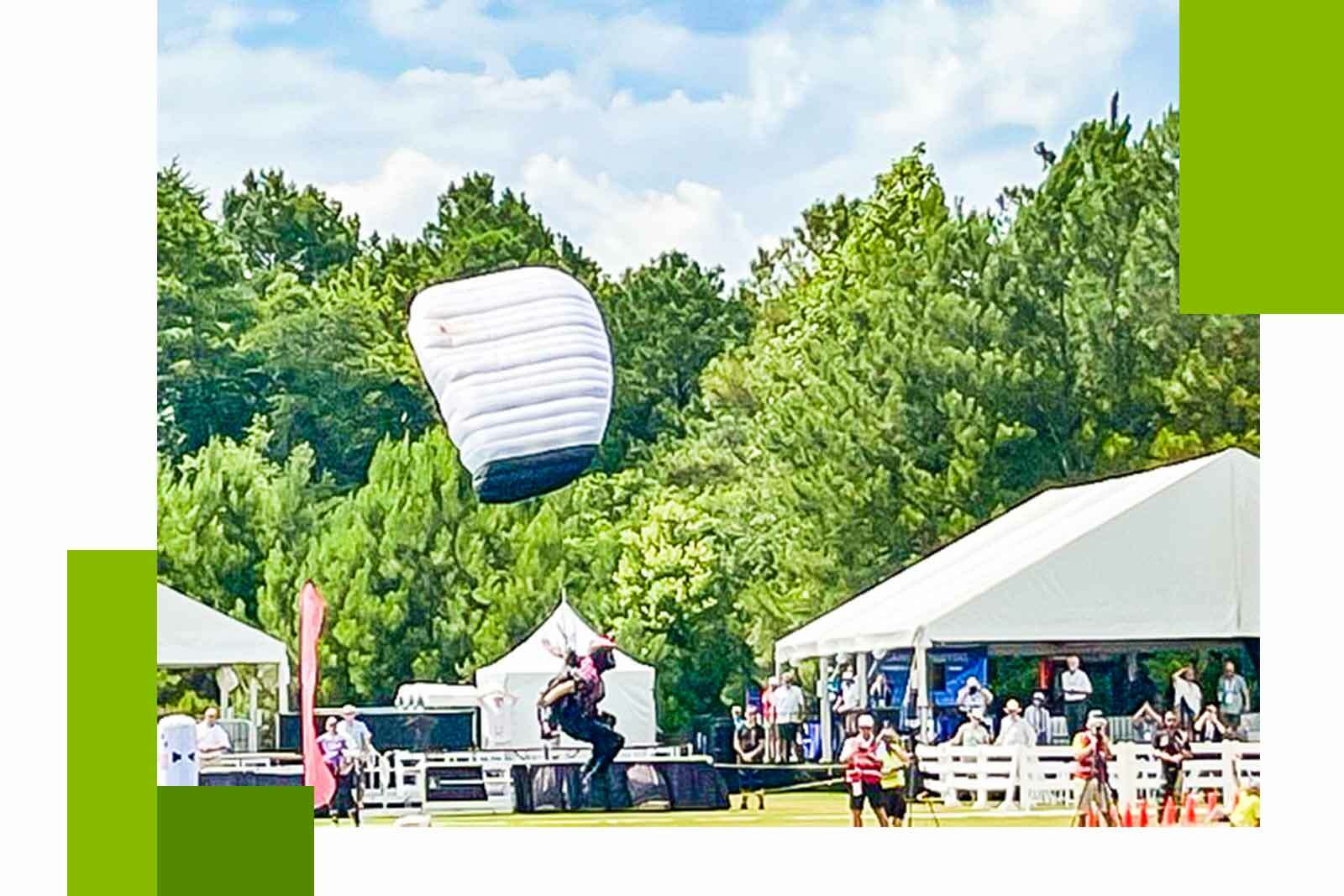 But it wasn’t until he was a fleet leasing manager for an automobile company in Indianapolis that the then- 25-year-old decided to take his own leap of faith on a weekend adventure with colleagues.

“I’d never seen someone skydive, so why not?” Akers said. “That first jump, I was scared out of my mind. But the moment my feet left that six-seat Cessna it changed my life forever.”

As the next wave of jumpers begin descending one by one from high above, Breese and Akers take it in with knowing wonderment. Yes, it’s nice to compete for a world title. But for the sport, this could just be the beginning.

“When we normally compete, no one’s watching,” Akers said, “because we compete in wide-open spaces away from everyone. But this is different: the crowd is incredible, and the World Games are the stepping stone to (inclusion in) the Olympics.

“We’re here as a demonstration sport, and this is a chance to show Birmingham the potential of skydiving as it’s being watched all over the world.”

Regions Bank is a Foundation Partner for the 2022 World Games in Birmingham and is headquartered in the city. With more than 6,000 local associates, Regions provides a wide variety of community support through sponsorship, donations and volunteers – including nearly 400 for the World Games.

More from the World Games