Georgia still looks unbeatable. And so, too, does Cincinnati. Didn’t expect that, did you?

The Bearcats blew out UCF Saturday to climb to No. 2 in the latest AP Top 25 presented by Regions Bank. It’s a historic climb, because Cincinnati is the highest non-Power 5 team to reach No. 2 in more than a decade. And with only one Top 25 opponent, SMU, remaining on the schedule Cincy’s odds of making the College Football Playoff look better each week.

While Georgia remained a unanimous top pick, Oklahoma, Alabama and Ohio State climbed a spot each to round out the top 5. Vacating the lofty poll position was Iowa, which suffered its first loss of the season in a stunning upset to Purdue. 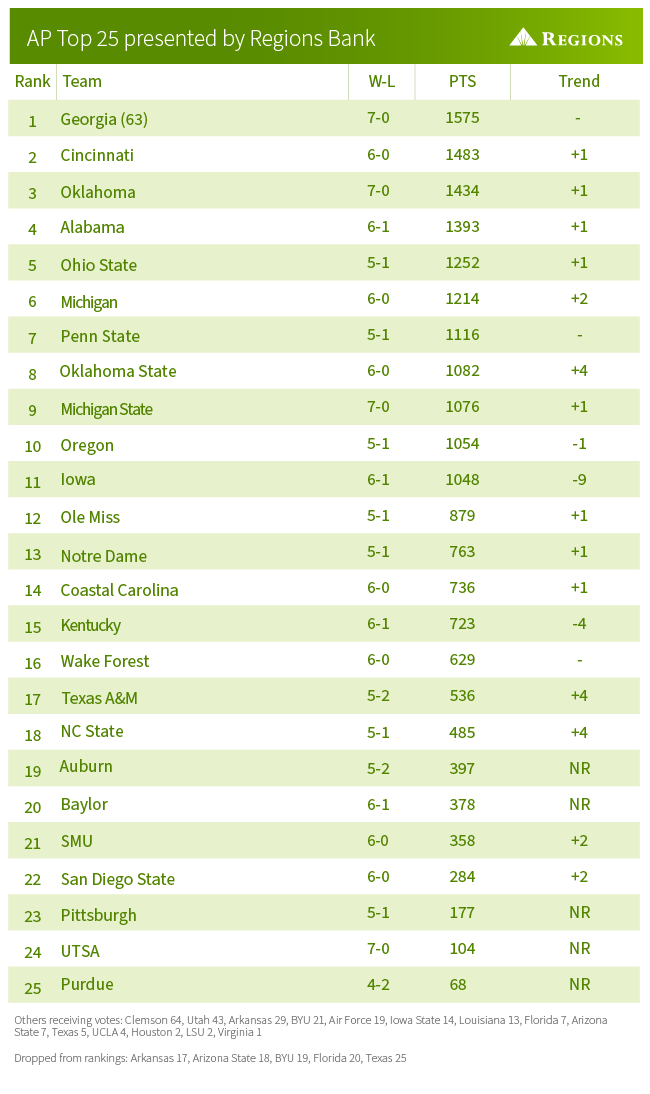 Poll Points
• Seven ranked teams lost on Saturday, including five to unranked teams, increasing the total on the season to 47.
• In each of the last three weeks, a top-three team has lost to an unranked team, starting with Stanford over then-No. 3 Oregon on Oct. 2.
• Texas A&M knocked off then-No. 1 Alabama last week before Iowa was upset at home.

Who’s In
All those losses by ranked teams shook up the back half of the rankings and put five new teams in the poll this week, including one that has never been there before.

• No. 19 Auburn (5-2) is back in the rankings after a road victory against Arkansas.
• No. 20 Baylor (6-1) returned to the Top 25 with a convincing victory against BYU.
• No. 23 Pittsburgh (6-1) is ranked for the first time this season. Quarterback Kenny Pickett and the Panthers thumped Virginia Tech on Saturday. Pitt has been briefly ranked in four of the last six seasons but never higher than 21st.
• With Purdue (4-2) entering the rankings, Kansas takes over the top spot on the list of longest current runs without being ranked among Power Five schools. The Jayhawks were last ranked in October 2009. Up next are Illinois, Rutgers, Oregon State and Vanderbilt.
• No. 24 Texas-San Antonio (7-0) is unbeaten and ranked for the first time in the history of the program. The Roadrunners have only been playing at the highest level of Division I football since 2012. They are the first Conference USA team to make the Top 25 this season.

Who’s Out
Florida fell out of the rankings for the first time this season after the Gators were beaten by LSU on Saturday.
That leaves the state of Florida with no ranked teams, a rare occurrence in recent poll history. The last time it happened was 2011, when six times the Sunshine State did not have a single ranked team.

• Arkansas’ three-game losing streak has dropped the Razorbacks from the rankings after a five-week run.
• Arizona State is out again after losing to Utah.
• BYU lost for the second straight week and is unranked for the first time since last month.
• Texas is back … to be being unranked after the Longhorns blew a double-digit, second-half lead for the second consecutive week.

Ranked vs. Ranked This Week
For the first time this season, the college football schedule has no games matching ranked teams.