Clemson stumbled while Arkansas continued to rumble to heights not seen in nearly a decade.

Ranked second in the preseason, Clemson tumbled 16 spots to No. 25 in the latest AP Top 25 presented by Regions Bank following a rare ACC loss. That ends a streak of 97 straight weeks in the AP top 10, a streak that is currently matched only by top-ranked Alabama.

If you’re keeping score at home, Alabama still has some work to do to catch Miami’s record of 137 straight weeks in the top 10, a string that began in 1985 and ended in 1993.

Meanwhile, Arkansas pulled off its second upset of the season against a ranked foe, beating Texas A&M 20-10 in Arlington, Texas. The Razorbacks’ last appearance in the Top 10 was in 2012. The ranking of No. 8 was short-lived – Arkansas lost to Louisiana-Monroe and vacated the poll for the rest of the season. 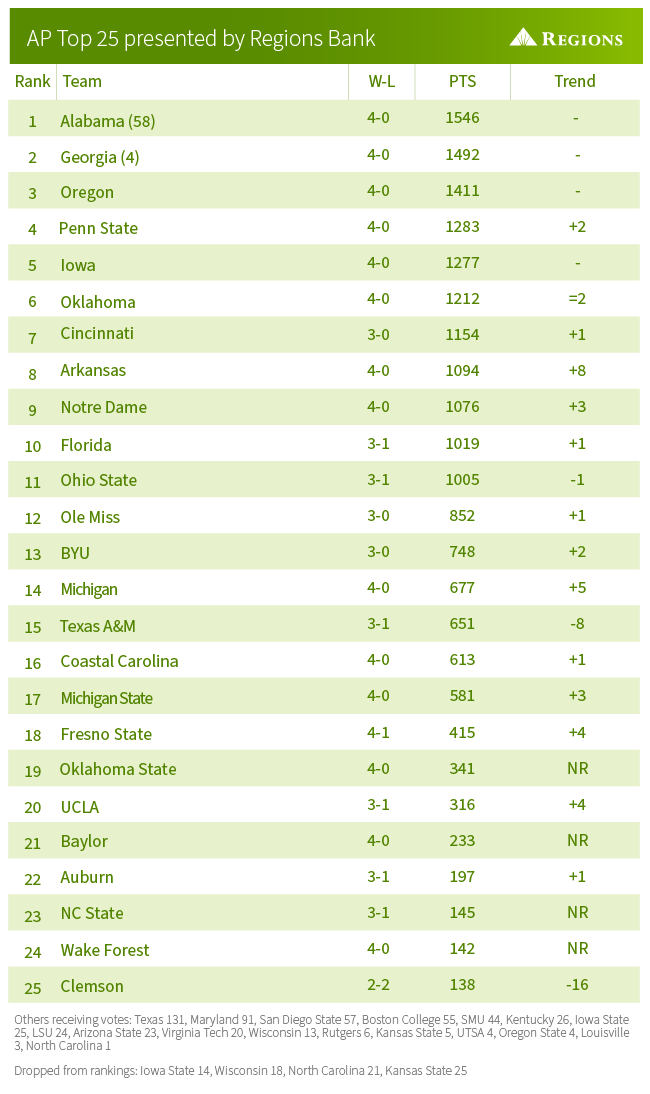 Poll Points
• Clemson did manage to extend its streak of weeks ranked to 107, the third-longest active streak behind Alabama (218) and Ohio State (150).
• The Buckeyes’ streak does not include polls in which they were ineligible during the 2020 season because the Big Ten was not planning to play due to the coronavirus pandemic.
• Alabama’s current streak of poll appearances is second all-time to Nebraska’s 348 from 1981-2002.

Who’s In
After six ranked teams lost this weekend, four to unranked opponents, four new teams entered the rankings of the first time this season.
• No. 19 Oklahoma State improved to 4-0 by beating Kansas State. The Cowboys finished last season ranked.
• No. 21 Baylor is 4-0 after upsetting Iowa State at home and is ranked for the first time since the final 2019 poll.
• No. 23 North Carolina State (3-1) snapped an eight-game losing streak against Clemson to move into the ranking. The Wolfpack was ranked briefly at No. 23 last season.
• No. 24 Wake Forest is 4-0 for the first time since 2019, when the Demon Deacons were ranked for a total of five weeks with a peak of No. 19. That’s the only season Wake has been ranked since 2008.

Who’s Out
Two teams that started the season in the top 10 are now unranked.
• Iowa State started No. 7, its best ranking in school history after finishing ninth in 2020, but now sits at 2-2 and unranked.
• North Carolina was No. 10 to start the season but fell out after being routed by Georgia Tech to fall to 2-2.
• Wisconsin began the season No. 12 but after losing to Penn State and Notre Dame to fall to 1-2 is unranked. Kansas State spent one week in the rankings and dropped out.

Ranked vs. Ranked This Week
• No. 12 Mississippi at No. 1 Alabama. First ranked matchup between the Rebels and Tide since 2017.
• No. 8 Arkansas at No. 2 Georgia. Razorbacks’ resurgence has been one of the stories of the first month of the season.
• No. 7 Cincinnati at No. 9 Notre Dame. The Fighting Irish obliged the Bearcats, who need Notre Dame to be as good a possible if they have any shot to sneak into the playoff.
• No. 21 Baylor at No 19 Oklahoma State. Might be a short stay in the rankings for one of the Big 12 rivals.