Kay understands the special challenges that families of U.S. military service members face all too well. Not only does she have a military background herself, she’s also been married to a U.S. service member for 12 years. Throughout their marriage, they have been stationed around the country and in Europe. But all of that moving around comes at a price — especially when it comes to finding employment as a military spouse.

“It’s not been easy for me to find employment everywhere we’ve lived,” Kay says. “Moving around as often as military families do makes it difficult for spouses to find a job and develop a career. It’s like you’re starting your career over again after every relocation.”

Eight years ago, she and her husband received orders to Alabama, and Kay became a Regions associate. That changed everything. Her career has developed with the company in a way that she has never experienced before.

“The support I’ve received as a military spouse at this company is unparalleled,” she says. “For the first time in my professional life, I have been able to grow my career.” Kay started out in the Contact Center, then moved on to Digital Communications, followed by time on the Social Media team. She now works in Human Resources supporting three executives with administrative and project work.

Growing a career at Regions is exactly what the company is trying to help associates like Kay do.

“At Regions, we are committed to supporting U.S. service members, veterans and their families,” says head of HR Business Partners and Talent Management Dwight Julbert. “Military families make sacrifices for our country, and this includes career sacrifices made by military spouses. As a retired service member myself, I’ve seen first-hand these sacrifices. When Regions helps military spouses secure and maintain employment at Regions it’s not just about making life better — it’s also good business.”

This is where a Department of Defense program comes in. Their Military Spouse Employment Partnership (MSEP) is a career program connecting military spouses with hundreds of partner employers who commit to recruit, hire, promote and retain military spouses. The military spouse population numbers over 600,000, and brings with it a variety of personal backgrounds, professional skills and life experiences to the labor market.

In addition to finding jobs, an important element of the MSEP is the focus on maintaining employment – helping military spouses remain employed after relocating, either at the same company or in a similar role at a participating corporate partner company.

Kay had heard of the MSEP before, so last year she asked Diversity, Equity and Inclusion Talent Management Program Manager Jeff Hodges if the bank was thinking about joining. To her delight, he asked her to help in the process of joining the program.

“MSEP was something that was on our radar for 2021, but with Kay’s help, we were able to join earlier than originally planned,” says Hodges. “This was a remarkable win for us, and we couldn’t have done it without her help.”

In December, Regions was inducted into the partnership, becoming one of 500 corporate members. Military spouses from all branches of the armed forces can use the MSEP’s job search to access career opportunities offered by MSEP partners worldwide. And this now includes jobs at Regions. A dedicated MSEP specialist works with Regions, recommending candidates to jobs and jobs to candidates.

“To have MSEP in our Regions talent pipeline is a game-changer, and it strengthens the bank’s efforts to support military families as we continuously improve how we build the best team” says Hodges.

Kay says that helping Regions take the steps to join the MSEP has been a tremendous honor for her.

“I’m so honored to know that this will help other military spouses out there find employment,” she says. “And with Regions’ support of me, I can’t wait to see where I can take my career next.”

Regions is committed to serving the military community, and this commitment continues to grow and evolve. Partnership with the MSEP is the latest addition to the bank’s BRAVE Program for Veterans, launched in 2019. For more information, visit Regions’ military recruiting page on regions.com. 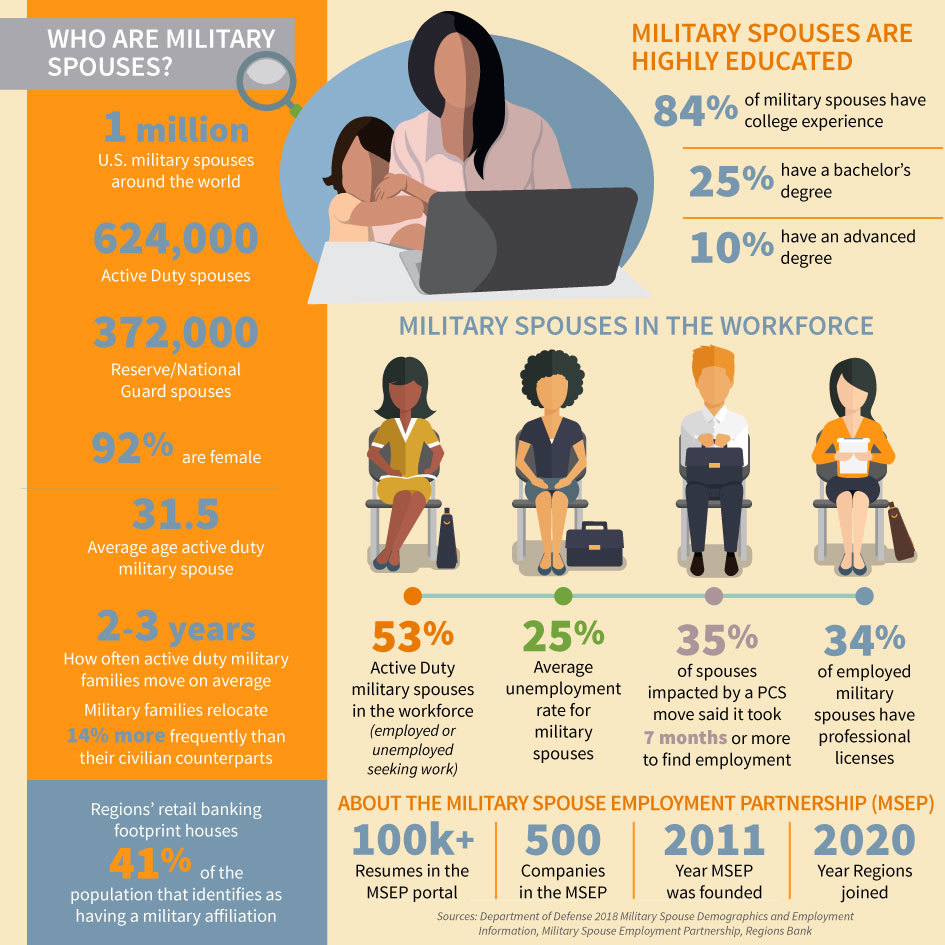