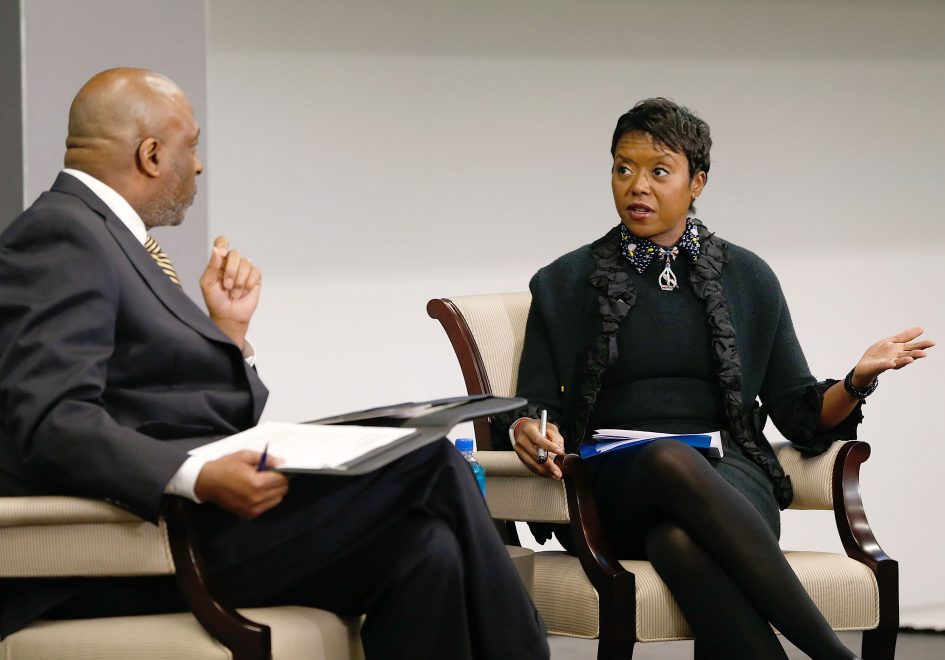 At a young age, Mellody Hobson learned a valuable lesson from a Chicago employer. The man was John W. Rogers, Jr. The message was clear:

“You want people in your life who have no agenda except your well-being,” Hobson said.

More than 100 local business owners gathered at Regions’ corporate headquarters in downtown Birmingham Tuesday afternoon seeking advice, guidance and insight into how to grow their companies.

The program, “Building for the Future,” offered lessons to promote supplier diversity. And an audience comprised of women and minority-led suppliers would get a glimpse into someone who has enjoyed success on a global stage.

For an hour, Hobson, president of Ariel Investments and and vice chair of Starbucks, held stage, answering questions from moderator Barnett Wright of The Birmingham Times.

A regular contributor to CBS News and a member of various corporate and nonprofit boards including Estee Lauder and Starbucks, Hobson was named to Time Magazine’s annual list of the 100 most influential people in the world in 2015.

But behind the successful façade: An internal drive her mother instilled when she was a child in Chicago.

“What kept me going was that I didn’t want to be poor,” Hobson said. “I’d already been poor.”

At age 5, even though no one in her family had graduated from college, she told her mother she planned to attend Yale. Instead, she graduated from another Ivy League stalwart, Princeton. In the fifth grade, she met with an orthodontist and reached an agreement, on her own, to make payments for braces.

At 19, she took on an internship at Ariel Investments, a Chicago investment firm founded by current CEO John W. Rogers Jr., where she quickly learned the key to success was as simple as the lesson her mother instilled.

She also told the audience of female and minority-owned supply companies why they were important to businesses like Regions. “Supplier diversity means a business is getting the best in class,” she said.

The Building for the Future event was held to help with getting business – not just at Regions, or locally, but on a regional and national stage.

“Part of our mission is to support supplier diversity and to create opportunities that can help you build for the future,” explained Tom Twitty, Chief Procurement Officer for Regions. Regions’ bankers lead a panel discussion on how to do business, focusing on relationships, cash flow and other important topics.

Regions executives provided an overview of how suppliers can acquire business, but also a window into the regulatory world they must be braced for to succeed. Marcus Lundy, Head of Supplier Diversity and Business Development at Regions, explained how applying for business on a dedicated platform would also open vendors and suppliers to Tier 1 companies across the nation, from corporate giants to utilities, such as Coca-Cola and Alabama Power.

Lundy said it’s important for companies to seek diversity “because women and minority-owned businesses offer the quality, innovation and value we seek.”

A roundtable discussion, led by Duke Hinds, a Commercial Banking Executive for Regions, focused on where businesses can find help – from establishing a relationship to combatting fraud and improving cash flow. For most businesses, the first step is to form a partnership with their local branch manager.

“Our mission is to grow businesses that we do business with by bringing in experts and meeting your definition of success,” Hinds said.

The event also included a networking finale, that allowed business owners to meet one another and ask pertinent business questions.

But Hobson remained the centerpiece of the day.

She imparted wisdom learned from those who impacted her life. For example, her mother – who she said was “brutally pragmatic” — told her at a young age that she would face obstacles and people who weren’t nice. “But never use that as an excuse.”

And from Jerry Reinsdorf, a friend and the long-time owner of Chicago’s NBA Bulls and major league White Sox: “Don’t ever intentionally hurt anyone’s feelings.”

Her benchmark for suppliers was simple, that getting the key business meeting was the first victory.

And, yet, the biggest key to success was what her mother provided in abundance.

“I grew up in a house where my mother gave me hope every day,” Hobson said. Building for the Future drew entrepreneurs to Regions’ headquarters for a primer in how to do business. 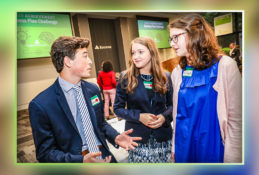 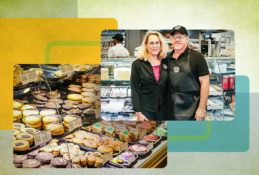 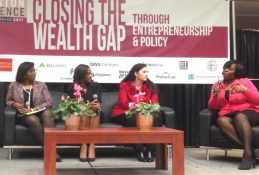 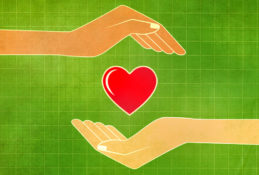