The words from Ashley T Brundage were spoken with equal measures of courage and empathy – combined with a sense of understanding that could only come from someone who’s been through what she’s been through.

“Being trans wasn’t just something that I randomly discovered or made an instant decision on. I made a decision to keep living, honestly,” she said, recalling the years she spent leading a double life – and then accepting that she just couldn’t do it. Not anymore.

“If someone was to say I had a choice (about being trans), this was my choice: I chose not to be a part of the 42% suicide rate for the transgender community,” Brundage shared. “There were times that I thought about going down that path.”

But she had allies – loving family members and friends who helped pull her through.

And today, she lives.

Brundage is still married. Still a parent. Still the person she always was. It’s just that, now, she’s also her authentic self – to everyone.

Brundage is a sought-after speaker, as well as founder and president of Empowering Differences, a public speaking and education organization specializing in intersectional leadership. Her comments came during the latest Conversations with Clara discussion hosted by Clara Green, head of Diversity and Inclusion for Regions Bank. As part of a PRIDE Month video discussion with Green that was shared with Regions associates, Brundage was open, candid and forthright.

Her insights can lead to two important goals. One, her message – and her Empowering Differences organization – help people who are trans realize they are not alone. Next, Brundage’s comments help people who are not LGBTQ+ better understand the experiences of those who are.

Early in the discussion, Brundage shared some memories.

“Something is just not right; I don’t understand why I feel the way I feel,” Brundage recalled thinking when she was a child. “I conveniently had an older brother and an older sister, so I had hand-me-downs to choose from, and I gravitated a lot of the time to my sister’s stuff.”

But it was more than playing with dolls or acting as female characters when childhood friends would re-enact movies. Increasingly, Brundage wasn’t feeling in line with how she was developing.

“I was really scared,” she said, recalling how she looked up, in the earlier days of the internet, information about being transgender.

At first, Brundage did not embrace it. Rather, she “covered” – concealing who she really is.

“That was my coping mechanism from that point forward – was just to be as outwardly masculine-presenting as possible,” Brundage said. “So every single sporting event, everything that one would see as a typical masculine event, I was fearful of people spotting my feminine natural tendencies. So I would present the most masculine things as possible so no one would ever think that I was trans or ever think that I was different.”

Ashley described her covering as “toxic masculinity” – not in a way that hurt others, but, rather, hurt herself.

The years moved on. A marriage. Two children. On the surface, things seemed “normal.” Below the surface, Brundage was reaching a pivotal moment.

“Honestly, the fact that I had kids, that was really my saving grace because I would have never wanted to leave them without one of their parents,” Brundage told Green. “Literally, it’s life or death.”

Brundage’s choice to live – and to be authentic – has yielded incredible support from family, friends and advocates worldwide. It hasn’t been easy. But it’s been worth it.

She described how, when she was transitioning in 2010, she decided to seek a new career. And she would only work for a company that valued her for who she is. It took time.

“It was in-and-out, if I even got in,” she said of her initial job interviews. “There were times I had the door slammed in my face; I was asked to leave; I had the cops called on me. People would say, ‘Oh, you don’t have an interview here today,’ or, ‘You have the wrong address,’ or, ‘We would never hire anyone like you; you’re wasting our time.’”

But over time, as part of her interviews, she started asserting the value diverse candidates bring – how she identifies with a large segment of the populace, people who will appreciate a company supporting members of the LGBTQ+ community and demonstrating inclusivity in the workplace.

Not only did she land a job. She was promoted. Again and again. Now, in addition to leading Empowering Differences, she helps guide Diversity and Inclusion for a major corporation. She traces it back to being authentic in her initial interviews with the company. 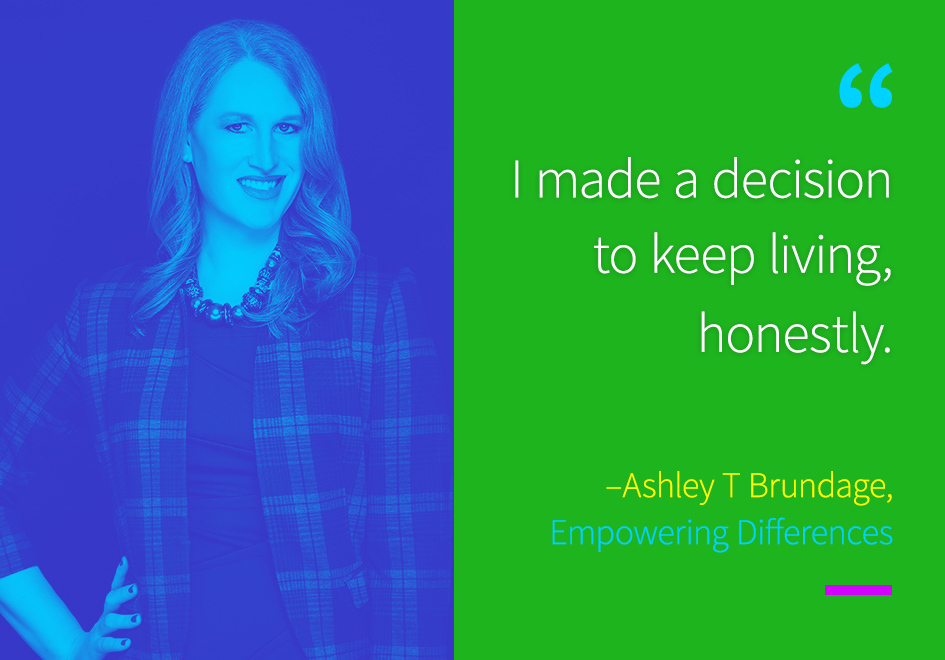 Driving change is why Brundage spoke with Green. Her Empowering Differences platform focuses on educating and inspiring others.

For those who aren’t members of the LGBTQ+ community, it can be a learning process. For example, what about pronouns? Ashley uses ‘she.’ But it’s important to respect the decisions of others, too.

“Using someone’s name is always a safe space,” Brundage guided. “If you don’t know of someone’s pronoun, try to live in a neutral space until you know.”

And don’t paint people with a broad brushstroke. Brundage spoke of a misperception she gets a lot.

“There’s a mindset that because I’m trans, I must be gay,” she said. “I think it’s important to understand that those are two different distinctions.”

Rather than attaching a label on someone, build a relationship with that person, Brundage advised. They’ll respect your desire to be inclusive and will let you know how they identify personally – and how they wish for you to identify them.

“I think it’s very important that we always stand up for marginalized, diverse communities as a whole,” Brundage said. “We’re just stronger together.”

Which is why Ashley T Brundage’s choice to live – and to share her experience – is the latest step in a series of diversity and inclusion conversations shared with Regions associates.

“I love the work that you have done with your organization to help others find their way,” Green told Brundage as their discussion concluded. “These conversations can’t happen unless we find individuals like you who are so willing to share their stories. You have empowered all of us.”

For additional resources, and answers to commonly asked questions, Ashley recommends checking out this link within the GLAAD organization’s website.

‘You can be your full self here’