Georgia, looking invincible again, is back on top. And Texas, despite a last-second loss, is back in the AP Top 25 presented by Regions Bank for the first time in 11 months.

A tumultuous Week 2 of the college football season resulted in some serious shakeups. No one had a bigger role in the chaos than the Sun Belt Conference, where three teams pulled off stunning victories on the road. 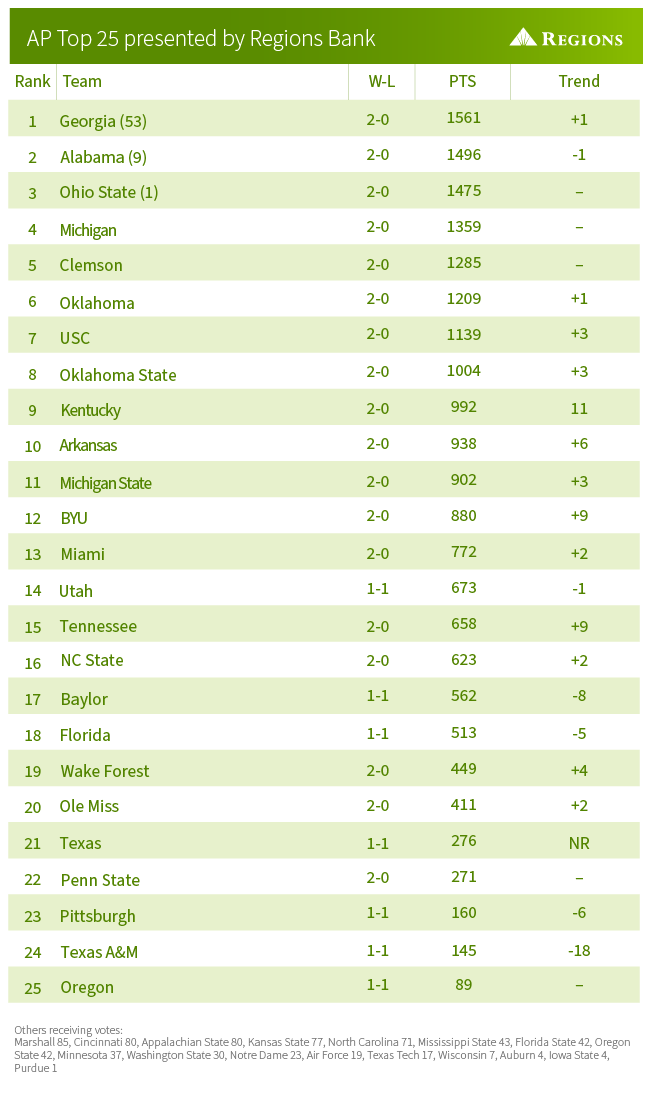 Georgia reclaimed the top spot in The Associated Press college football poll on Sunday, and Kentucky, Oklahoma State and Arkansas moved into the top 10 after an upset-filled weekend across the country.

The defending national champion Bulldogs, who started the season at No. 3 in the AP Top 25 presented by Regions Banks, took two weeks to get back to where they spent most of last year.

Georgia jumped Alabama after it cruised to a 33-0 victory against Samford.

But it wasn’t so much about what the Bulldogs did this week as much as what they did last week, combined with the Crimson Tide needing a late field goal to escape at Texas on Saturday.

No. 4 Michigan and No. 5 Clemson held their places, but the rest of the top 10 was shuffled.

Oklahoma moved up a spot to No. 6. Southern California jumped three places to No. 7, its best ranking since September 2017.

The rest of the top 10 are new arrivals: No. 8 Oklahoma State moved up three spots. No. 9 Kentucky jumped 11 places for its best ranking since it reached No. 8 in October 2007. And No. 10 Arkansas was up six.

After being upset at home by Sun Belt schools, Texas A&M dropped from No. 6 to No. 24 and Notre Dame tumbled out all the way from No. 8.

The Aggies were beaten by Appalachian State and the Fighting Irish fell to 0-2 after losing to Marshall.

It was the fifth time in the last 10 seasons and first time since 2020 that two top-10 teams lost at home to unranked teams in the same week.

Notre Dame is unranked for the first time since Sept. 17, 2017, snapping a streak of 80 straight poll appearances, which was fourth in the country behind Alabama, Ohio State and Georgia among active runs.

No. 1 winning and dropping, as Alabama did, is a common occurrence. Since the AP college football poll started in 1936, it has happened 91 times.

The last time it happened was 2019, when twice during the season the top spot flipped twice while teams remained unbeaten.