Georgia renewed the South’s Oldest Rivalry Saturday. Twenty-four hours after dispatching Auburn, the Bulldogs returned to No. 1 for the first time in the regular season since 1982 in the AP Top 25 poll presented by Regions Bank.

The vote atop the rankings was unanimous. Why wouldn’t it be? Even with backup quarterback Stetson Bennett, who looks flawless by the way, the Bulldogs have been the nation’s most dominant team by a wide margin.

Preseason No. 1 Alabama tumbled to No. 5 after going on the road and losing to unranked Texas A&M (albeit an Aggies squad that also opened the preseason in the top 10). A 41-38 loss on a walk-off field goal was still a shocker as it ended Alabama’s record streak of 100 straight victories against unranked foes.

Iowa climbed to No. 2 after a showdown top 5 victory against Penn State and Cincinnati, just a week after upsetting Notre Dame, rose to No. 3 with a resounding, 52-3 victory against Temple. 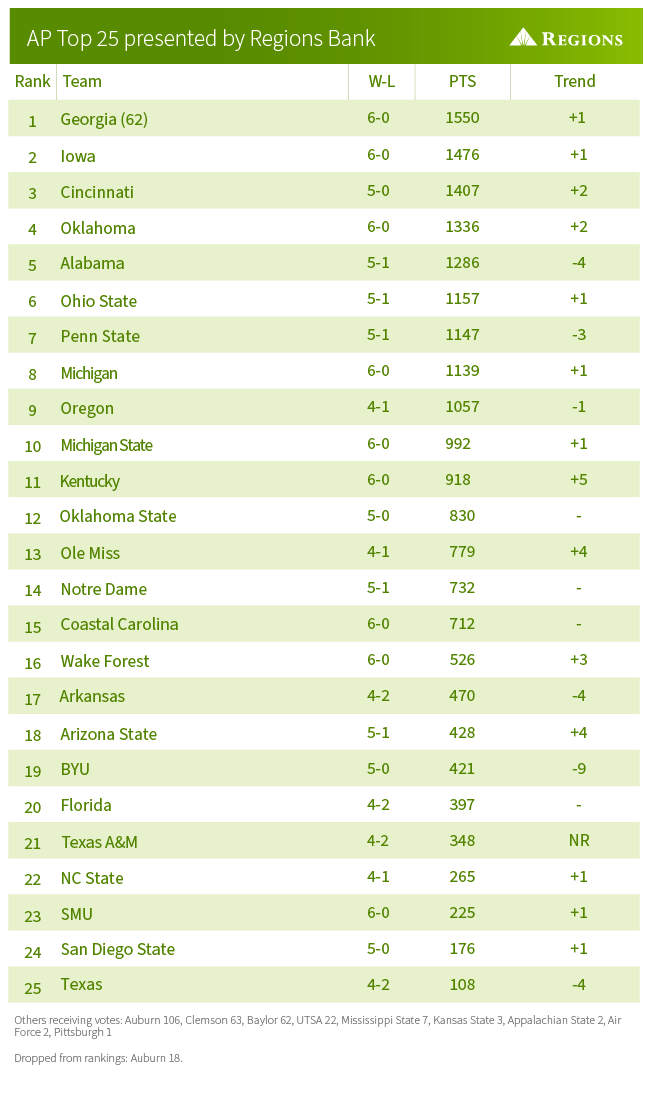 The only league that has had half the top 10 in the rankings is the Southeastern Conference, which has done it 23 times, according to ESPN.

Not including last season when some FBS teams were ineligible for the poll early in the season because their conferences were not planning on playing a fall schedule, the last time the SEC had five top-10 teams was the final regular-season poll of 2019. This week’s representation: