The first thing people noticed about Lee Ann Petty when she approached was the smile. It radiated warmth. The second thing, the eyes that locked on to every word. Lee Ann didn’t merely greet someone, she immersed herself in the lives of her friends as they shared highs and lows in the inevitable conversation that followed.

A longtime Regions associate in Birmingham, serving most recently as volunteer services coordinator, Lee Ann seemed to know everyone: At work, in nonprofits and businesses, and throughout each community that comprises Regions’ headquarter city.

She wasn’t merely a friend. She was an ambassador – a point Leroy Abrahams made when addressing his Community Affairs team following Lee Ann’s passing in December after a year-plus battle with cancer just shy of her 42nd birthday:

In the Birmingham area, there are few who showed more commitment to serving the community than Lee Ann. This commitment allowed her sphere of influence to be very broad and her death has been a blow not only to our team and Regions, but also to the larger community. I even received a condolence message from the mayor (Randall Woodfin of Birmingham). We should all be proud of how Lee Ann represented us.

She represented Regions values in black-tie galas and soup kitchens, on nonprofit boards and on the streets. A lasting image came recently, when she led a team of 150 volunteers from Regions, Protective Life, Landscape Workshop and Children’s of Alabama in planting flowers along 10 downtown blocks. The Blooming Birmingham effort came on a cold day, shortly after she was diagnosed, and she spent it digging in the dirt to create something beautiful and lasting.

“Work was very important to her. She did not let the treatments stop her from contributing to our team,” said Marta Self, executive director of the Regions Foundation. “And she always expressed that she was fortunate to combine her two passions in her role: being a dedicated professional and helping the community – increasing its prosperity, increasing its joy.”

She touched lives, even of people she didn’t know. She spearheaded fundraising efforts for the United Way, Junior Achievement, Children’s of Alabama and the Birmingham Education Foundation. She held leadership positions in the Junior League of Birmingham and numerous other organizations.

And she loved boosting her community. When Birmingham Restaurant Week rolled around, she hit a new venue for lunch and another for dinner each day to support local businesses. She was a fixture at the Alabama Symphony Orchestra’s Friday performances and its summer outdoor concerts at Railroad Park, before the pandemic curtailed the schedule. And the Sidewalk Film Festival never had a more ardent supporter.

Before she joined the Community Affairs team, Lee Ann worked with the legal department as lead litigation paralegal. Her work, of course, was exemplary.

“Lee Ann had such a calming presence,” said Kevin Patton, head of litigation at Regions. “She could make people feel comfortable in an uncomfortable situation. She was a real asset because the right personality, in that pressure-filled situation, made all the difference. Lee Ann was a gem.”

She never forgot birthdays, organizing a party for each member of her team, then remembering those dates even after she’d moved on. And, after just a short time, she had her co-workers joining her on weekend volunteer opportunities.

“She inspired us through her example,” Patton added. “She was already going to the soup kitchen, then she helped us stretch ourselves by getting us to go with her. And when we get there, she goes in and gives everyone hugs because she’d known them for years. That presence made you comfortable and willing to try new opportunities of service to others.”

After serving as a loaned executive to United Way, Lee Ann returned to Regions in a new role with Community Affairs. And her large circle of friends expanded once more.

“She was so curious about people and things,” said Ann Forney, the manager of major gifts for the Community Affairs team. “She collected friends from all over the bank and from all over the city, people of different ages and backgrounds. She cultivated relationships.”

“She was a bright light, wherever she was, until the end. Every room she entered, she radiated positivity. You couldn’t be down around her. Even while she was battling, she made it about you, your parents, your family.” 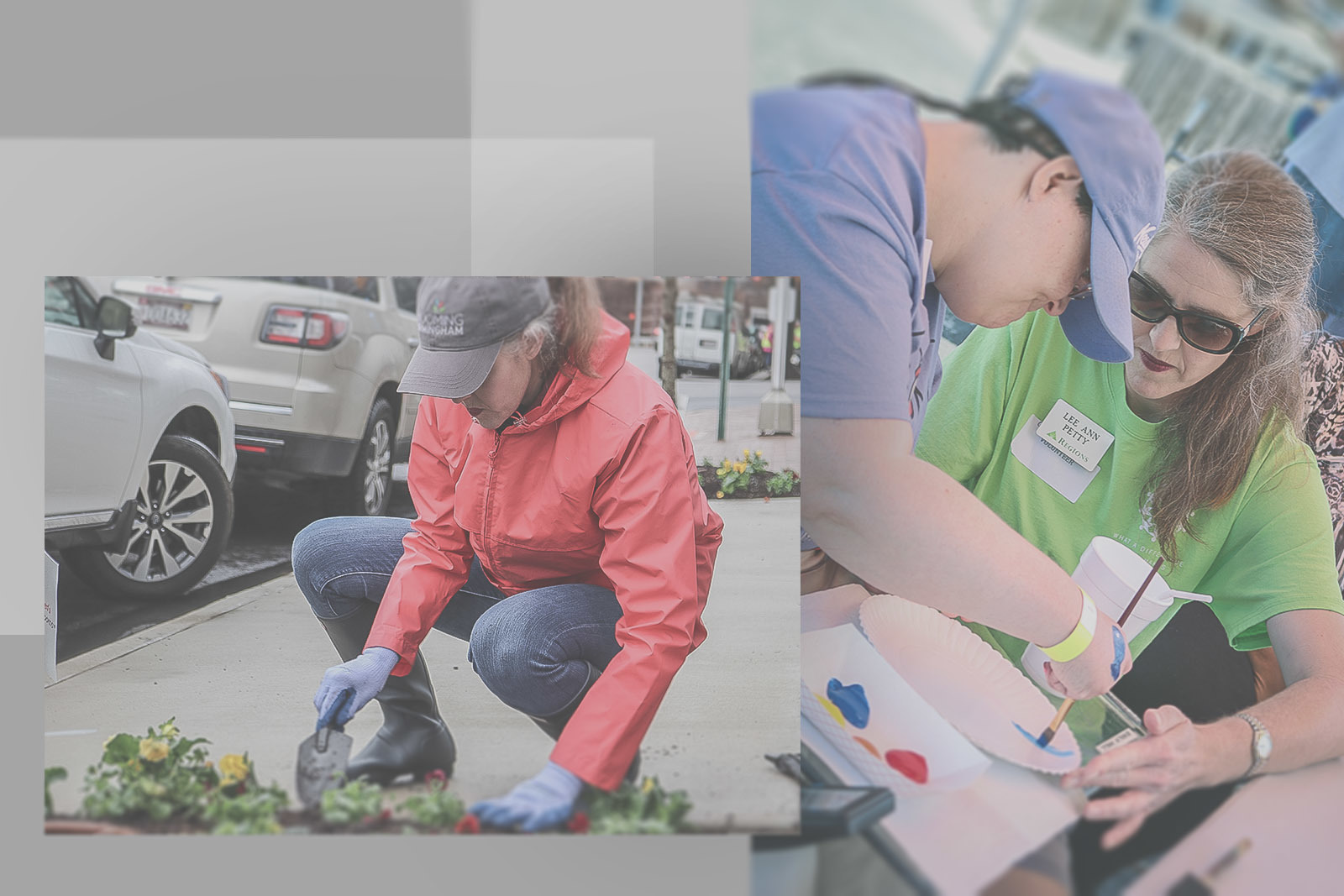 Friends remember her love of her family. And her love of sports – especially the Davidson Wildcats and the school’s most famous alum, Steph Curry. She made a trip to the 2019 Final Four with her father to see her second favorite team, Auburn, take eventual national champion Virginia to the wire in a semifinal game.

And Regions will remember her with a new volunteer program and a soon-to-be-announced annual award, in her name, for the volunteer of the year. Children’s of Alabama will honor her with a plaque along the Blooming Birmingham greenery.

Her life, in and outside the League, was genuinely about service and love for Birmingham and all the people in it. Lee Ann was an embodiment of Dr. King’s words: “Not everybody can be famous, but everybody can be great because greatness is determined by service… You only need a heart full of grace and a soul generated by love.”

Ann Forney remembers how much she enjoyed being with Lee Ann at big events.

“She was so extroverted and drew people to her, where I’m an introvert,” Forney said. “Yet she made networking events fun for everyone because of her positive energy. People gravitated to Lee Ann.”

Kevin Patton remembers how Lee Ann made service to others second nature.

“She continues to inspire us,” Patton said. “We just had an MLK Day of Service, and all I could think about was Lee Ann because she inspired us to give more of ourselves.”

And Marta Self believes Lee Ann’s impact will continue to motivate those who met her.

“She had a genuine joy in serving and the ability to do it representing Regions values so well,” Self said. “When I had a chance to be her manager, I said, this is wonderful, because she was such an inspiration. She poured herself into people’s lives and impacted everyone she touched.”