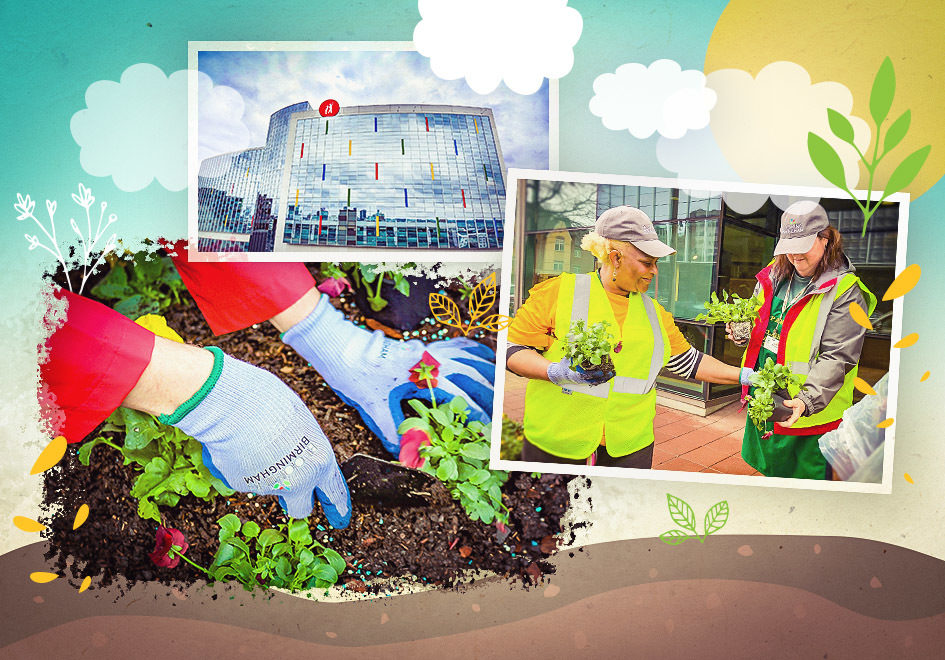 Children’s of Alabama CEO Mike Warren has long had a vision for connecting the hospital campus with nearby Railroad Park. Blooming Birmingham is making it happen.

Frankly, the day started out dreary.

But not on this day. Even though the weather never changed, the dreariness soon faded away.

Clad in colorful vests, tugging red wagons packed with planting supplies, and armed with an arsenal of brilliant flowers, dozens of volunteers descended on Birmingham’s Parkside community on this December morning. They were planting the first seeds of Blooming Birmingham.

Wet weather did nothing to dampen the spirits of volunteers. Teams dug in, quite literally, determined to make a difference.

Designed to connect the state-of-the-art Children’s of Alabama hospital campus with the popular Railroad Park to the north, the first phase of Blooming Birmingham is responsible for the 4,000 pansies, 450 tulip bulbs and 584 yellow daffodils that now line ten square blocks in the heart of the city. The displays will be maintained and updated regularly with colorful flowers celebrating each season.

Before the planting began, there were words of thanks.

“I have been waiting for this day for a long time,” said Mike Warren, CEO of Children’s of Alabama, who’s long wanted to bridge the gap between the hospital and the park. “It’s going to be great.”

Because the project is about more than planting. It’s about adding a welcoming, thoughtful touch to the Parkside area where many families are spending days, weeks, or longer, seeking vital healthcare and cutting-edge treatments for children facing complicated health challenges.

Volunteers were prepared to plant, rain or shine. The daffodils, pansies and tulip bulbs didn’t mind the moisture at all.

“You might want to think about, in the next couple of hours, the fact that, at 8 o’clock this morning, there were 316 kids – inpatient – in this facility,” he said. “When you get cold and wet and you’re wondering why in the world you’re doing this, you might want to remember the 222 children who were treated in this emergency room in the last 24 hours.”

It was a reminder that the families down the hall and in each wing of the hospital are going through one of the most difficult times of their lives. And any effort to make their time here just a little more enjoyable – just a little more bright – is deeply appreciated.

“Here’s another opportunity for you to make a difference in our community,” said Bill Horton, head of Commercial Banking at Regions Bank, a partner in Blooming Birmingham. “It is unbelievable the value that Children’s of Alabama brings to the Birmingham community and throughout Alabama.”

“When you think about our assets of Children’s of Alabama as well as Railroad Park, Blooming Birmingham creates the opportunity for us to connect,” Horton added. “And that’s very important – not only connecting Children’s and Railroad Park, but having more connectivity with the surrounding neighborhoods. So it’s going to be a great, great initiative.”

Motivated, inspired and determined, the volunteers, some donning ponchos, took to the streets, little red wagons from Children’s in tow with their supplies. Members of the St. Clair County Master Gardeners organization were stationed along the streets, offering helpful guidance.

“It’s all about education and helping the community,” explained Carolyn Mills, who previously worked at Children’s and is now part of the St. Clair County Master Gardeners. “We go out and assist people – different churches and areas that need planting and guidance – and give advice on the arrangement of their planting and the depth the plants need to go to and the timing of the year.”

Looking back toward the 12-story hospital towering above 5th Avenue South, and positioned by a flower bed just around the corner from the Ronald McDonald House, where many parents stay during their child’s treatment, Mills shared her hope for how Blooming Birmingham will bring a measure of joy.

Driven by a spirit of teamwork, the mood was festive and bright as volunteers shared the benefits Blooming Birmingham will have on the city and its visitors.

“I hope that they can just get out and see the greatness of the city of Birmingham and all that we have to offer. It’s a wonderful place with lots of resources to help their family,” Mills said. “May God be with them and their families.”

On any given day, Children’s is treating patients from across the city, the state and even the nation.

“It’s almost impossible not to either be directly impacted, or someone in your family or friends has been impacted, by Children’s and their expertise and the value they bring to our community,” said Duke Hinds, a member of Regions’ volunteer team, as he paused next to a bed of freshly planted flowers, his gloves coated with topsoil. “It’s really second to none. I really think it’s a gem of our community.”

As the flower beds took shape, these Parkside blocks were immediately made more colorful – the cheer of fresh flowers making the area more welcoming and vibrant.

The Blooming Birmingham initiative is, in many ways, a community saying thanks.

“A lot of us do not realize sometimes what little things, such as tulips blooming, pansies blooming, and the area looking so well organized, nice and neat – how it can make an impact,” said Lee McKinney of McKinney Capital, an investor in the Landscape Workshop grounds-management company.

“This is teamwork in action,” added Anne Lary, part of Regions’ volunteer team. “Volunteerism is ingrained in the culture of the companies that are out here today. And when our teams work together, we can achieve a greater purpose than we could on our own.”

For a day that started out dreary, the results are radiant.

“We see what this collaboration is all about,” said Mark Drew, Executive Vice President and General Counsel of Protective Life Corporation, another partner in Blooming Birmingham. “It’s about bringing partners together to help Birmingham thrive.” 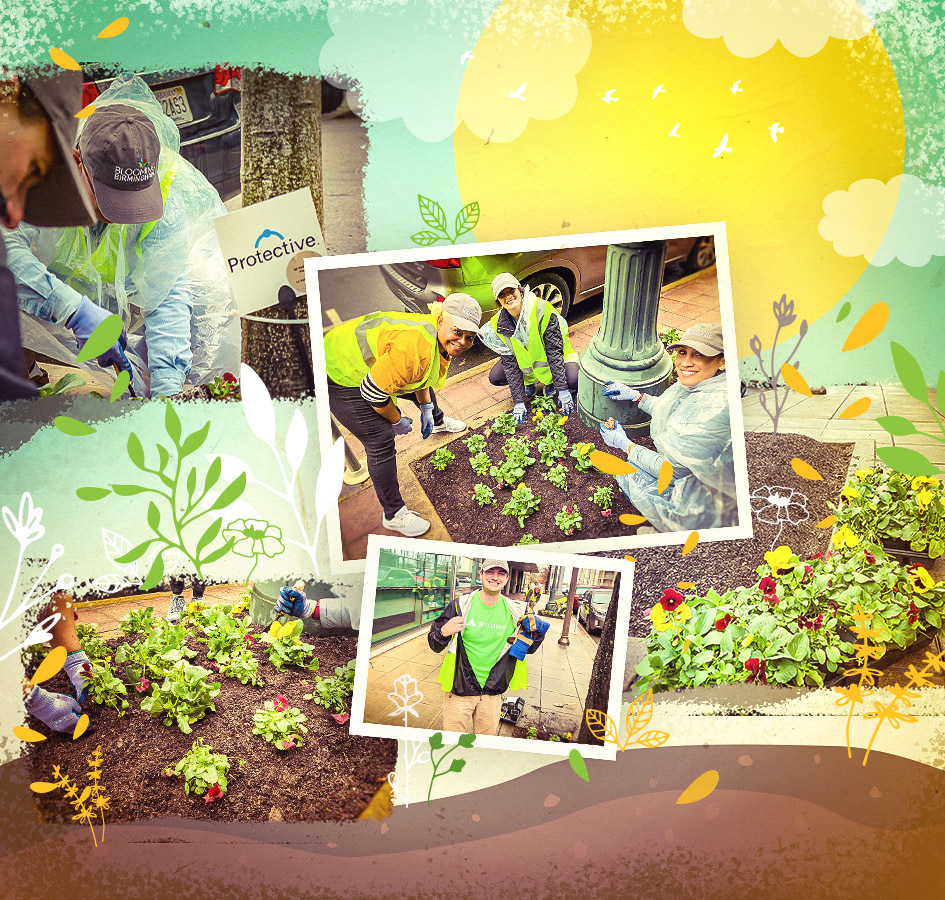 The December 2019 launch of Blooming Birmingham was just the beginning. Seasonal updates will keep these beds colorful and bright throughout each year.