Retired Army Col. Marilyn Wills is a soldier, wife, mother, mental health professional, educator and survivor of the Sept. 11, 2001, attack on the Pentagon. Wills recently joined Clara Green, head of Diversity, Equity & Inclusion at Regions Bank, to share her story of survival, hope, and service with bank associates, including military veterans and military spouses joining in-person and via video conference.

A native of Monroe, Louisiana, Col. Marilyn Wills never planned to join the military. However, a work-study assignment in the ROTC office for Grambling State University, a historically black university, set her on a new career path in the U.S. Army.

“I wanted to support and defend the Constitution of this great country. I knew what that meant,” Wills said. “I was honored to wear the uniform every day … I was serving our sons and daughters in the military.”

Deployed across the globe, Wills’ leadership helped distinguish her in military service. 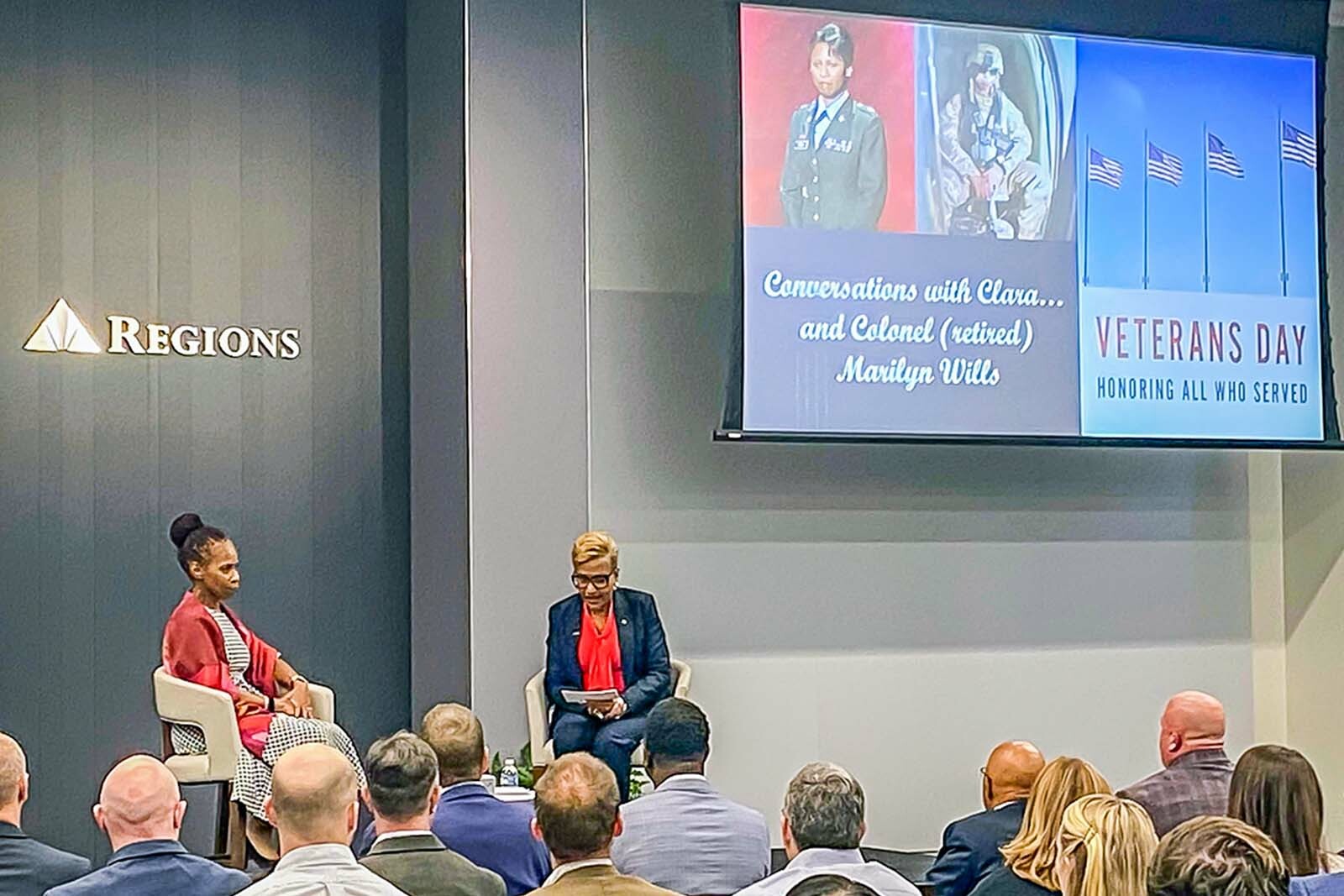 Life suddenly changed for Wills on Sept. 11, 2001, when terrorists attacked the United States, using commercial airplanes as weapons. At 9:37 a.m. American Airlines Flight 77 hit the Pentagon in Washington, D.C., where Wills was attending a meeting at the time.

In seconds, there was chaos as the lights went out. Wills stated those in the meeting were left in complete darkness as “we heard the loudest noise that you’ve ever heard in that room.” The impact threw Wills from an interior room to the inside exterior of the Pentagon wall. A table in the room collapsed.

Knocked out momentarily, she struggled to gain consciousness and began crawling across a table to get out the door she originally entered.

Wills leadership kicked in telling Lois (a civilian) to hold on. “Where I go, you go. Do not let me go.”

So, they crawled. And crawled. Lois said she couldn’t breathe. Wills responded by taking her arm out of her military sweater, allowing Lois to filter air through the fabric. “She laid back on her legs and she said, ‘I can’t go any further.’ Her nylons had melted on her legs.”

“I survived it. I’m here. My life is an open book. It’s hard for me to share this story. But I know it’s a must.”
Col. Marilyn Wills

But Wills wasn’t ready to give up. She told Lois to climb on her back to carry her to safety. “When we stopped, I (realized) there were five other people behind her. So, I told them, ‘We’re gonna get out of here.’”

Wills knew there were windows close by. She continued crawling in the dark, smoke-filled building until she reached a window, only to find it sealed shut. Wills and the servicemembers she was with tried everything, at one point throwing a printer at the window in an attempt to force it open.

“My Colonel came forward … He said, ‘We’re gonna beat on the frame.’ So, we continued to beat on the frame of that window, just constantly, he and I with our feet and with our hands, and the frame popped open. Less than 12 inches. And the smoke bellowed out of the room…”

That smoke got the attention of first responders on the ground who created a human ladder, helping Wills and others to safety.

“As I stepped out of the window, I stepped onto shoulders and arms and heads, until the ladder eventually collapsed. And then a Navy officer caught me, and he said, ‘I got you. You’re safe.’”

Wills still carries scars – from smoke inhalation, burns and the emotional toll of the experience. For many years she did not talk about being in the Pentagon that day. However, over time she decided to tell her story.

Wills continued to serve in the military after 9/11, including a tour in Afghanistan, an assignment she considers the most significant of her career for two reasons.

“The very first day I stood on ground in Afghanistan was the very day that we found Osama Bin Laden,” she recalled. “Young soldiers were saying, ‘Oh, it’s time to go home now.” Instead, she knew her first task was to get her charges to refocus on the mission.

She soon found another focus – the chance to teach young Afghan girls English.

“I would go every day from my compound through the Taliban and through some really bad areas to teach young girls in rooms that we would deem uninhabitable. But they wanted to learn English … they were excited. On every Tuesday, Thursday and Friday, the Americans were coming to teach English.”

Transitioning to Civilian Life and Service

Col. Wills retired in 2013 after 30 years of military service and is among a small number of black, female Army officers. Post-retirement, she taught at every level, from elementary school through college as an adjunct professor at Trinity University teaching psychology. Additionally, she was the clinic director at the Prince George’s County Community Vaccination Center of Excellence in Maryland.

Wills shared both the challenges and benefits of transitioning from the military to a civilian career as well as the skills that military veterans bring to the table as employees.

“It’s so important for organizations like Regions Bank to hire military veterans,” Wills said. “We bring a lot to the table … you will see a difference in your organization.”

Regions Bank associates who are military veterans shared their reflections on the Conversations with Clara event in this video.

Bring Your Whole Self to Work
We have a passion for creating an inclusive environment that promotes and values diversity of race, color, national origin, religion, age, sexual orientation, gender identity, disability, veteran status, genetic information, sex, pregnancy, and many other primary and secondary dimensions that make each of us unique as individuals and provide valuable perspective that makes us a better company and employer. More importantly, we recognize that creating a workplace where everyone, regardless of background, can do their best work is the right thing to do.