A magic night on Rocky Top ended a 15-year losing streak, vaulted Tennessee into the Top 3, and left the Volunteers 6-0 for the first time since 1998 – a season that ended with a national title.

Meanwhile, James Madison remains the only first-year FCS program to ever crack the AP Top 25 presented by Regions Bank. 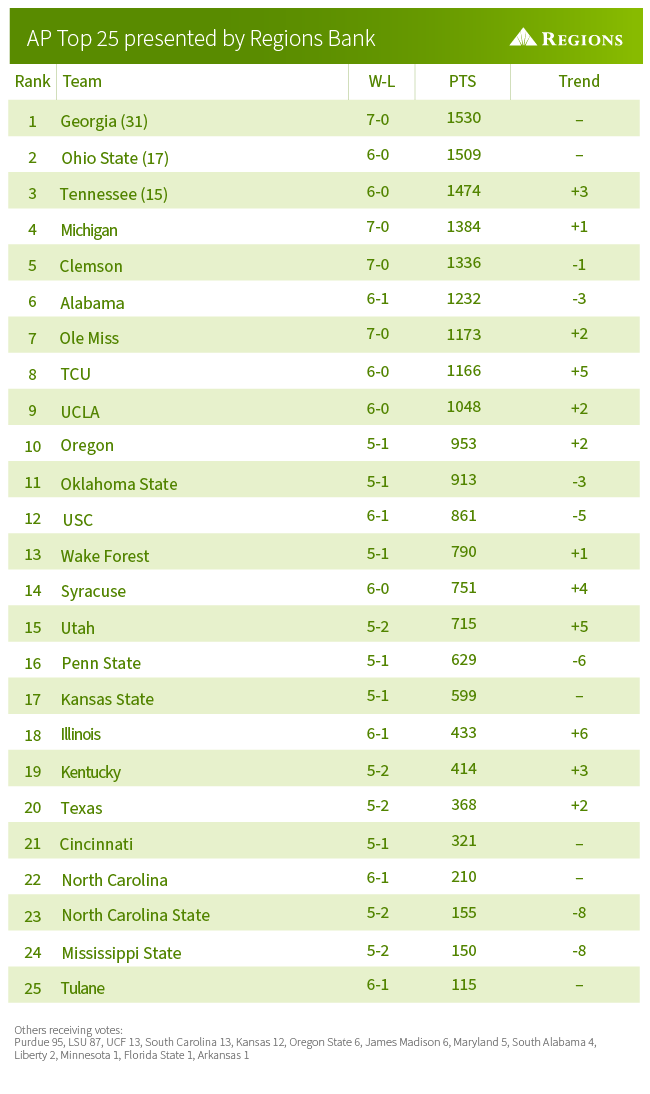 Tennessee moved to No. 3 in The Associated Press college football poll behind No. 1 Georgia and No. 2 Ohio State after knocking off Alabama.

The Crimson Tide was one of five unbeaten teams to fall during a wild weekend and dropped three places to No. 6 in the AP Top 25 presented by Regions Bank. Alabama swapped places with the Vols after losing to them 52-49 on a field goal as time expired Saturday.

The Vols received 15 first-place votes and have their best ranking since starting the 2005 season at No. 3. The last time Tennessee was ranked this highly in the second half of the season was 2001, reaching the top 10 in late October and headed into the SEC championship at No. 2.

No. 4 Michigan moved up a spot Sunday, switching places with No. 5 Clemson after the Wolverines blew out now-No. 16 Penn State.

Tennessee made a case to be the No. 1 team in the country, and it swayed some voters.

Those who bought in on the Vols cited a resume that includes four victories against teams that were ranked at the time (at Pitt, Florida, at LSU and Alabama).

“I voted Tennessee No. 1 because the Vols’ strength of schedule is far superior to UGA and Ohio State,” said Ron Counts of the Idaho Statesman in Boise.

For comparison, Georgia has played just one team (Oregon) that has been ranked at any point this season. Ohio State has played three, though only one was ranked at the time (Notre Dame) and all of those opponents have at least three losses.

Plus, beating Alabama doesn’t happen often and holds a lot of weight with voters. No team this season has beaten a team with a better ranking at the time the game was played than Tennessee.

“It was a tough call between Tennessee and Georgia for No. 1,” said Kellis Robinett of The Wichita (Kansas) Eagle. “I have been voting the Bulldogs ahead of everyone else for several weeks, mostly because their blowout victory over Oregon has aged like a fine wine. But I think beating Alabama is slightly more impressive.”

So why only No. 3 for Tennessee?

The ranked-at-the-time argument falls flat for some voters, who were less impressed with victories against Florida and Pitt and give Georgia and Ohio State credit for being more dominant overall.

“I’ve been high on Tennessee all year, but I don’t think ranking them No. 3 is any kind of snub this week,” said Mike Barber of the Richmond (Virginia) Times-Dispatch.

After six games matching ranked teams this past weekend, five more are on tap, including the first top-10 matchup in the Pac-12 since the 2016 conference championship game (No. 4 Washington and No. 9 Colorado).