Jon Meinert called several audibles during the 2022 College Football Playoff (CFP) National Championship in Indianapolis, but TV viewers didn’t see one of them.

That’s because the director of Food Rescue and Transportation at nonprofit Second Helpings led the offense charged with rescuing and redirecting food from CFP events off the gridiron.

For 25 years, Second Helpings has been rescuing food that would otherwise go into landfills, including 3.5 million pounds in 2021 alone. Regions Bank in Indianapolis has supported Second Helpings’ work since 2007 through initiatives like Souper Bowls, Giving Tuesday and the bank’s “What a Difference a Day Makes” campaign. The Regions Foundation, a nonprofit primarily funded by Regions Bank, also recently announced a $20,000 grant supporting Second Helpings’ Culinary Job Training (CJT) program.

What’s it like to like to run the X’s and O’s of a food rescue operation involving 68,000-plus fans? We visited with Meinert to find out. 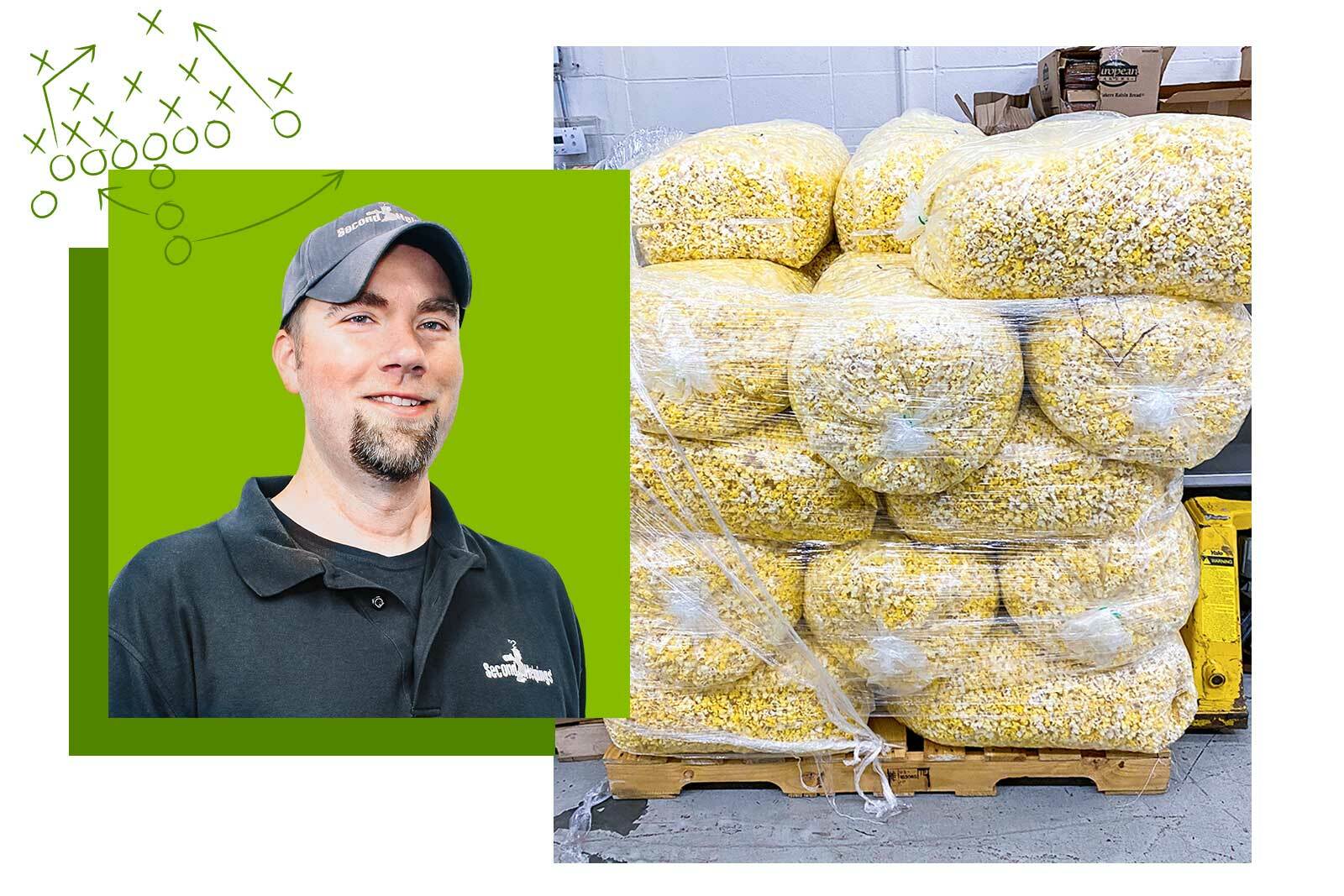 Q:  How did the CFP food rescue opportunity come about, and what was the project timeline?

A: The Green Sports Alliance approached us about helping capture surplus food donations and eliminating waste from the event. We started having conversations in late October of 2021 to coordinate for January.

Q:  Let’s talk logistics. What did they involve?

A:  Our team of staff drivers and amazing food rescue volunteers would meet at Second Helpings. I routed them to various locations from the communication we received from food donors and the Green Sports Alliance. All items were brought to Second Helpings, weighed, and logged into our system. We then sorted items to determine what could be utilized in our hunger relief kitchen for meal production; what could be distributed with meals; what could be redistributed with our partner pantries; and what should be used as animal feed or composted.

Q:  Now, let’s talk numbers. What did your efforts yield?

A:  We rescued 36,680 pounds of food from various catering partners throughout the city, as well as in-house caterers at the Indiana Convention Center and Lucas Oil Stadium. They included some fun items like big bags of popcorn, lots of bottled beverages, salads and sweets that may not always accompany the meals we distribute to our partner agencies.

Q:  What was the most challenging aspect of the operation?

A:  Scheduling! We needed to make sure we could either cover all the events or that we had a back-up plan for late-night events. With an 11 p.m. event, plans were made with site locations to properly store items in refrigeration until we could get there the following day.

Q:  What were the most important factors for successful coordination?

A:  Communication was key. Weaving in new partners with existing ones, as well as getting specific feedback on the types of donations, quantities, storage and packaging … all normal questions when working through food donations, but when you fold in new partners, it becomes especially critical to cover the details.

Q:  What did you learn about Second Helpings’ volunteers during this project?

A:  It reinforced that we have the most dedicated volunteers who consistently go above and beyond to support our communities. Throughout the pandemic, we pivoted numerous times to meet the needs of our clients. We’re a very flexible group conditioned to work with highly perishable items in a short amount of time.

Q:  There’s an expression, “Teamwork makes the dream work.” What was the impact of working with partners during this project?

A:  Statistically speaking, 36,000-plus pounds of food equates to roughly 18,000 meals. Partnering in this capacity helped save so much waste had there not been a plan of action in play. You could only imagine how much waste events of this scale could produce without food rescue plans, composting and recycling, as well as other repurposing plans for equipment and event items we may not have even been aware of.

Learn more about food waste and its effect on the environment.