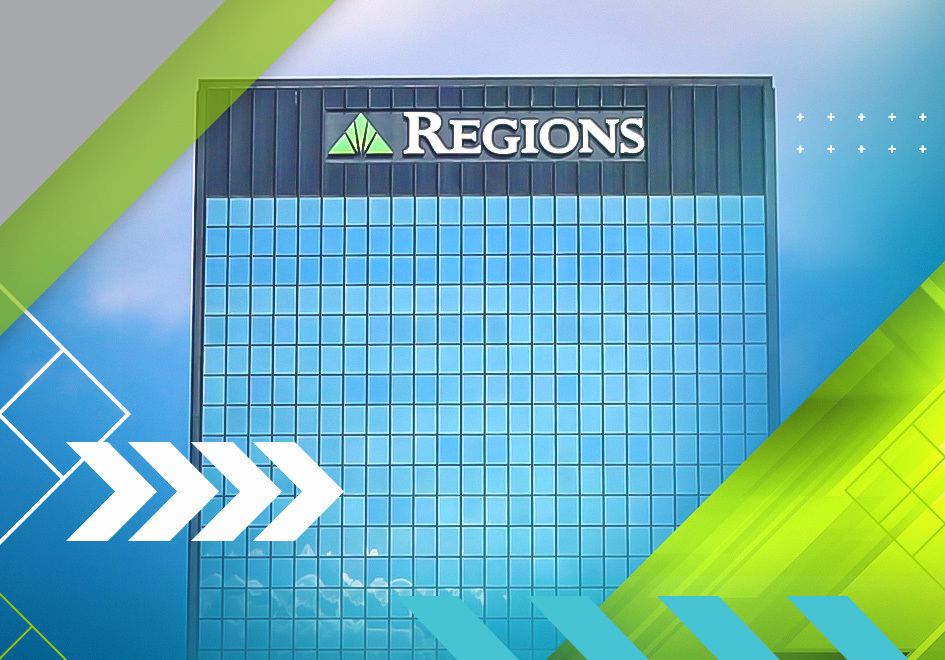 BIRMINGHAM, Ala. – Oct. 22, 2019 – Regions Financial Corporation (NYSE:RF) today announced earnings for the third quarter ended September 30, 2019. The company reported net income from continuing operations available to common shareholders of $385 million, an increase of 9 percent compared to the third quarter of 2018. Earnings per diluted share from continuing operations were $0.39, a 22 percent increase. Total revenue grew 2 percent while pre-tax pre-provision income(1) increased 16 percent over the prior year. Adjusted revenue(1) grew 3 percent while adjusted pre-tax pre-provision income(1) increased 4 percent. The company also generated year-to-date positive operating leverage of 6 percent on a reported basis and 3 percent on an adjusted basis(1) versus the comparable prior year period.

“Regions delivered solid financial results during the third quarter, reflecting continued progress in our efforts to build a consistently performing and sustainable bank,” said John Turner, President and CEO. “Total revenue grew 2 percent, the adjusted efficiency ratio improved 70 basis points, and we generated the highest pre-tax pre-provision income in nearly a decade. Consistent with our strategic plan, we are making targeted investments in technology and talent to meet the needs of our customers and communities and provide long-term value for shareholders.”

*    The first dividend for Series C preferred stock issued in April of 2019 was declared in July of 2019 resulting in third quarter dividends that exceed their expected quarterly run rate.

**  Based on income taxes at an approximate 25% incremental rate.

During the third quarter of 2019, the company produced the highest level of pre-tax pre-provision income since 2010. Total revenue increased 2 percent on a reported basis and 3 percent on an adjusted basis(1) compared to the third quarter of 2018 as growth in non-interest income exceeded a modest decline in net interest income.  The company’s net interest margin declined three basis points from the prior year, but only one basis point from the prior quarter, despite lower market interest rates. Reported non-interest expense remained well controlled during the quarter reflecting a 6 percent decline compared to the third quarter of 2018. Adjusted non-interest expense(1) increased 1 percent reflecting higher salaries and benefits associated with increased production-based incentives and one additional weekday in the current quarter, partially offset by reduced staffing levels.

Non-GAAP adjusted items(1) impacting the company’s earnings are identified in order to assist investors in analyzing Regions’ operating results on the same basis as that applied by management, and provide a basis to predict future performance. Non-GAAP adjusted items(1) in the current quarter include the company’s continued focus on increasing organizational efficiency and effectiveness. This included $1 million of severance expense and $5 million of net expenses associated with branch consolidations and property and equipment charges. In addition, the company recorded a $1 million leveraged lease termination gain during the quarter.

Non-interest income increased 13 percent on a reported basis, and 9 percent on an adjusted basis(1). Service charges increased 3 percent reflecting increased activity and continued customer account growth. Total mortgage income increased significantly, driven primarily by increased hedging and valuation adjustments on residential mortgage servicing rights. Lower interest rates also drove an increase in mortgage production and sales income during the quarter in line with an 18 percent increase in total mortgage production. Wealth management income increased 5 percent driven by growth in investment management and trust fees and includes the third quarter acquisition of Highland Associates, Inc. Favorable market value adjustments on employee benefit assets resulted in a $9 million increase during the quarter.  The increase in other non-interest income included a net $11 million increase in the value of certain equity investments during the third quarter compared to a net $3 million decline during the prior quarter.

Card and ATM fees decreased 5 percent reflecting lower commercial interchange impacted by favorable rebate adjustments recorded in the prior quarter that did not repeat. Capital markets income decreased 8 percent attributable primarily to decreases in merger and acquisition advisory services and loan syndication revenue, partially offset by an increase in fees generated from the placement of permanent financing for real estate customers. Customer interest rate swap income was also negatively impacted by $6 million of market-related credit valuation adjustments during the third quarter, slightly less than the $7 million recorded during the prior quarter.

Non-interest expense increased 1 percent on both a reported and adjusted basis(1) compared to the second quarter. Salaries and benefits increased 3 percent driven primarily by an increase in the market value on employee benefit plan assets, as well as higher production-based incentives, one additional weekday in the quarter, and the acquisition of Highland Associates, partially offset by continued overall staffing reductions.

Non-interest expense decreased 6 percent on a reported basis, but increased 1 percent on an adjusted basis(1) compared to the third quarter of 2018. The prior year period included a $60 million contribution to the company’s charitable foundation reflected in other non-interest expense. Salaries and benefits increased 2 percent driven primarily by an increase in production-based incentives and one additional weekday in the quarter, partially offset by continued staffing reductions. Staffing levels declined 2 percent or 320 full-time equivalent positions from the third quarter of 2018. Excluding the prior year charitable foundation contribution, other non-interest expense increased $14 million due primarily to an increase in non-service related pension costs associated with a lower discount rate, as well as higher operational losses.

**   Average residential first mortgage balances include the impact of a $167 million loan sale at the end of the first quarter of 2019.

*** Indirect vehicles is an exit portfolio.

Total average deposit balances decreased 1 percent to $94 billion in the third quarter. Average deposits remained relatively stable in the Consumer segment while the Corporate and Wealth Management segments experienced modest declines of 2 percent and 1 percent, respectively. The decrease in Corporate segment deposits was primarily due to seasonal declines in public fund accounts. Average deposits in the Other segment deposits decreased 16 percent primarily within the wholesale corporate treasury time deposit category.

*   Excludes guaranteed residential first mortgages that are 90+ days past due and still accruing.

Asset quality performed in line with the company’s broader risk expectations reflecting improvements in several credit metrics and some continued normalization of others. Total non-accrual loans, excluding loans held for sale, decreased 8 basis points to 0.56 percent of loans outstanding. The decrease in non-accrual loans was primarily due to reductions in transportation, wholesale and restaurant within business services, and residential first mortgage and home equity within consumer. Total troubled debt restructured loans, excluding loans held for sale, decreased 7 percent driven primarily by reductions in commercial loans. Annualized net charge-offs were unchanged at 0.44 percent of average loans. The provision for loan losses exceeded net charge-offs resulting in an allowance for loan losses equal to 1.05 percent of total loans outstanding and 188 percent of total non-accrual loans. The increase in the allowance for loan losses during the quarter was primarily due to a 9 percent increase in business services criticized loans. The increase in business services criticized loans was driven primarily by higher classified loans within the energy, retail trade and manufacturing sectors, partially offset by reductions in non-accrual and special mention loans. The company’s third quarter credit metrics include the results of the recently completed bi-annual industry-wide shared national credit examination. While overall asset quality remains within the company’s broader risk expectations, volatility in certain credit metrics can be expected.

* Recent improvement in tangible common book value per share includes the impact of quarterly earnings, as well as improvement to market value adjustments within accumulated other comprehensive income, offset by continued capital returns.

Regions’ estimated capital ratios remain well above current regulatory requirements under the Basel III capital rules. The Tier 1(2) and Common Equity Tier 1(2) ratios were estimated at 10.8 percent and 9.6 percent, respectively, at quarter-end under the phase-in provisions.

During the third quarter, the company repurchased 39.7 million shares of common stock for a total of $589 million through open market purchases and declared $150 million in dividends to common shareholders. The company’s loan-to-deposit ratio at the end of the third quarter was 88 percent, and as of quarter-end the company remained fully compliant with the liquidity coverage ratio rule.

Regions Financial Corporation (NYSE:RF), with $128 billion in assets, is a member of the S&P 500 Index and is one of the nation’s largest full-service providers of consumer and commercial banking, wealth management, and mortgage products and services.  Regions serves customers across the South, Midwest and Texas, and through its subsidiary, Regions Bank, operates approximately 1,500 banking offices and 2,000 ATMs. Regions Bank is an Equal Housing Lender and Member FDIC. Additional information about Regions and its full line of products and services can be found at www.regions.com.

The foregoing list of factors is not exhaustive. For discussion of these and other factors that may cause actual results to differ from expectations, look under the captions “Forward-Looking Statements” and “Risk Factors” of Regions’ Annual Report on Form 10-K for the year ended December 31, 2018 as filed with the SEC.

The words “future,” “anticipates,” “assumes,”  “intends,” “plans,” “seeks,” “believes,” “predicts,” “potential,” “objectives,” “estimates,” “expects,” “targets,” “projects,” “outlook,” “forecast,” “would,” “will,” “may,” “might,” “could,” “should,” “can,” and similar terms and expressions often signify forward-looking statements. You should not place undue reliance on any forward-looking statements, which speak only as of the date made. Factors or events that could cause our actual results to differ may emerge from time to time, and it is not possible to predict all of them. We assume no obligation and do not intend to update or revise any forward-looking statements that are made from time to time, either as a result of future developments, new information or otherwise, except as may be required by law.

Use of non-GAAP financial measures

The calculation of the fully phased-in pro-forma “Common equity Tier 1” (CET1) is based on Regions’ understanding of the Final Basel III requirements. For Regions, the Basel III framework became effective on a phased-in approach starting in 2015 with full implementation extending to 2019. The Basel III rules are now fully phased in, other than with respect to deductions and adjustments whose transitional treatment has been extended until the federal banking agencies’ September 2017 proposal to revise and simplify the capital treatment of selected categories of assets is finalized. The calculation includes estimated pro-forma amounts for the ratio on a fully phased-in basis. Regions’ current understanding of the final framework includes certain assumptions, including the Company’s interpretation of the requirements, and informal feedback received through the regulatory process. Regions’ understanding of the framework is evolving and will likely change as analysis and discussions with regulators continue. Because Regions is not currently subject to the fully-phased in capital rules, this pro-forma measure is considered to be a non-GAAP financial measure, and other entities may calculate it differently from Regions’ disclosed calculation.

A company’s regulatory capital is often expressed as a percentage of risk-weighted assets. Under the risk-based capital framework, a company’s balance sheet assets and credit equivalent amounts of off-balance sheet items are assigned to broad risk categories. The aggregated dollar amount in each category is then multiplied by the prescribed risk-weighted percentage. The resulting weighted values from each of the categories are added together and this sum is the risk-weighted assets total that, as adjusted, comprises the denominator of certain risk-based capital ratios. CET1 capital is then divided by this denominator (risk-weighted assets) to determine the CET1 capital ratio. The amounts disclosed as risk-weighted assets are calculated consistent with banking regulatory requirements on a fully phased-in basis.

Non-GAAP financial measures have inherent limitations, are not required to be uniformly applied and are not audited.  Although these non-GAAP financial measures are frequently used by stakeholders in the evaluation of a company, they have limitations as analytical tools, and should not be considered in isolation, or as a substitute for analyses of results as reported under GAAP. In particular, a measure of earnings that excludes selected items does not represent the amount that effectively accrues directly to stockholders.

Management and the Board of Directors utilize non-GAAP measures as follows: