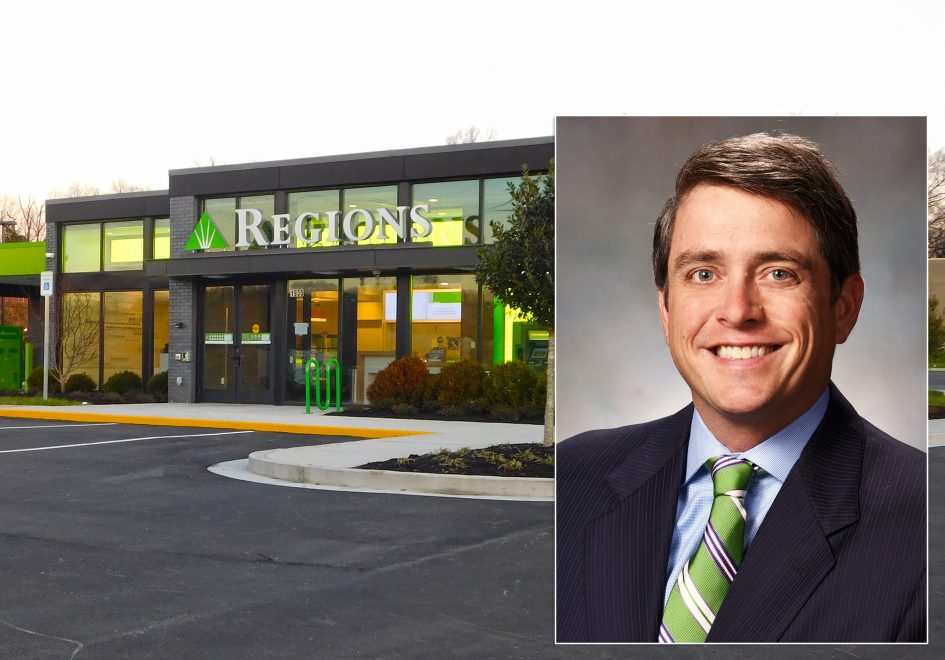 KNOXVILLE, Tenn. – August 2, 2018 – Regions Bank on Thursday announced Rob Stivers, Commercial Banking Leader for Regions in East Tennessee, has been appointed to serve as Market Executive for the bank in Knoxville and surrounding communities.

Stivers is part of a leadership team of bankers leveraging their local experience and market insights to expand Regions’ client base throughout greater Knoxville.

As Market Executive, Stivers will work with colleagues and community members to identify opportunities for the bank and its associates to make a meaningful difference in response to local needs. Through volunteer service, nonprofit support, delivering financial education, and more, Stivers and Regions’ entire leadership team will consistently reflect the company’s commitment to meeting clients’ needs and supporting the surrounding areas.

“Regions Bank is focused on working closely with local customers and listening to the needs of our communities as we deliver financial services and community support that are designed to make a valuable difference in Knoxville and beyond,” said John Turner, Regions President and CEO. “Rob’s expertise, combined with the experience of our entire Knoxville leadership team, will help Regions further strengthen its focus on East Tennessee. We are committed to the success of our communities and to consistently developing new ways to serve.”

Stivers succeeds Michelle Walters, who was recently promoted to the position of Consumer Banking Regional Executive leading Regions’ branch-banking operations in portions of 11 states across the Southeast and Midwest. Those states include Tennessee, where Walters is working with teams in Knoxville and elsewhere to consistently refine and strengthen the services customers receive at Regions’ branch locations.

“Regions is uniquely positioned to offer the comprehensive services of a larger bank while also providing local bankers who are constantly in touch with the needs of customers and communities,” Stivers said. “I am honored to build on Michelle’s foundation of local support and community engagement here in East Tennessee. Based on the expertise of our teams, and the resources of our company as a whole, we are able to deliver services that are custom-tailored to benefit a wide range of clients, from individual customers to major businesses across the area.”

Stivers is a nearly 20-year veteran of the Knoxville banking community. He has spent over six years with Regions meeting the complex banking needs of a wide variety of businesses. He previously spent over 13 years in retail banking, real estate banking and commercial banking for SunTrust.

Stivers currently serves on the Knoxville Chamber of Commerce Board of Directors. He was also a member of the 2017 class of Leadership Knoxville and has served the American Heart Association’s local Heart Walk initiative. Stivers has also held volunteer and leadership roles with the Boy Scouts of America and Nucleus Knoxville.

Further, Matt Etter also serves as Consumer Banking Manager overseeing Regions’ branch operations in additional portions of Knox County, as well as in Oak Ridge and surrounding parts of Anderson and Roane Counties. A 1990 graduate of East Tennessee State University, Etter has spent his entire career in retail customer service, leadership and management roles across East Tennessee. He joined Regions in January 1999 as a personal banker.

Duggins has over 30 years of financial services experience and joined Regions, then known as AmSouth, in Chattanooga in February 1995. He has been based in Knoxville since October 2007. His career began with SunTrust in Nashville in July 1988.

Together, each of these leaders, across all departments, will focus their teams on reaching the objectives of Regions360, the bank’s comprehensive approach to meeting customers’ needs. Through Regions360, the company’s bankers learn the unique goals of each customer and collaborate with colleagues from Regions’ various banking departments to develop holistic solutions.

“Regions Bank has deep roots in East Tennessee, and our teams are committed to exceeding the expectations of our customers, and our fellow community members, as we serve and support this area,” Stivers said. “By working hand-in-hand across all departments, our teams will consistently grow and excel, not only in customer service, but also in community engagement.”

About Regions Financial Corporation
Regions Financial Corporation (NYSE:RF), with $125 billion in assets, is a member of the S&P 500 Index and is one of the nation’s largest full-service providers of consumer and commercial banking, wealth management, and mortgage products and services. Regions serves customers across the South, Midwest and Texas, and through its subsidiary, Regions Bank, operates approximately 1,500 banking offices and 2,000 ATMs. Additional information about Regions and its full line of products and services can be found at www.regions.com.