Michigan made a big jump after winning “The Game” in convincing fashion.

The Wolverines erased an eight-game losing streak against Ohio State Saturday, beating the Buckeyes 42-27 to vault all the way to second in the latest AP Top 25 presented by Regions Bank. It’s the highest ranking for the Wolverines since 2016.

Cincinnati also climbed, moving up a spot to No. 3 while Alabama dropped one slot after a harrowing, four-overtime, come-from-behind victory at Auburn.

There’s no change at the top, where Georgia remains the unanimous No. 1 for the eighth straight week. 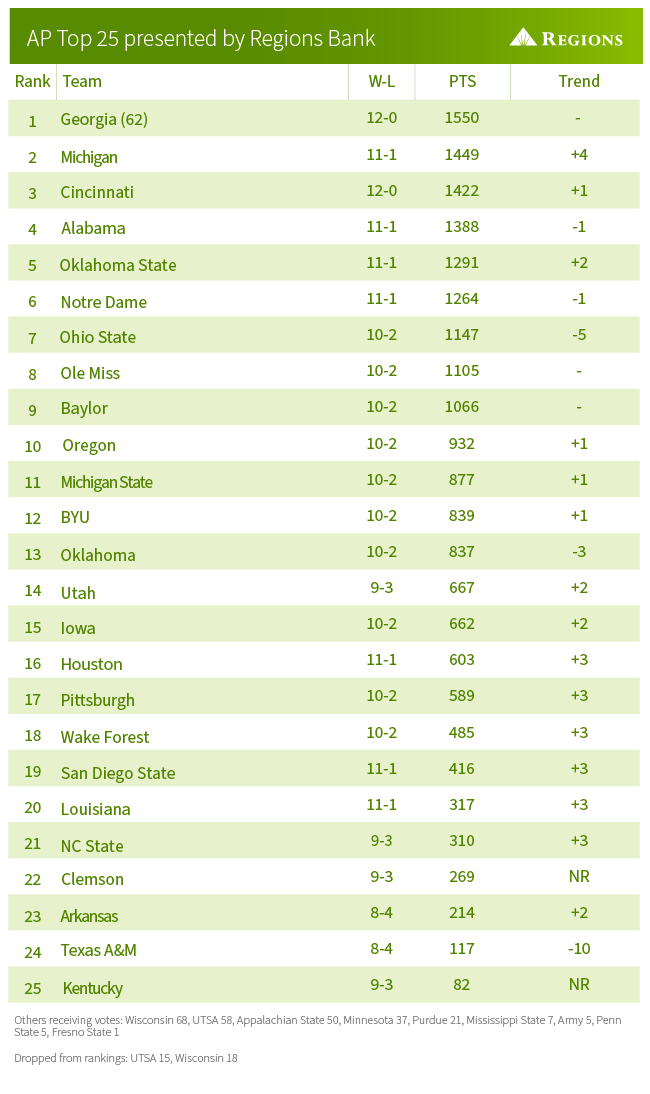 MORE FROM THE ASSOCIATED PRESSPoll Points
Georgia is one week away from matching a historic run. The longest streak of weeks as unanimous No. 1 was Alabama’s run of nine in 2018.
There are two more polls left this season, after next week’s championship games and then after the College Football Playoff national title is decided on Jan. 10.
If Georgia can beat Alabama in the Southeastern Conference title game next weekend and make a run through the playoff, it could break Alabama’s record.
But something to keep in mind for the Bulldogs: Alabama’s run of unanimous No. 1 rankings ended in a national championship game loss to Clemson and the Crimson Tide finished No. 2.Who’s In
• No. 22 Clemson (9-3) is back in the Top 25 after falling out after the last weekend of September. The Tigers have climbed back, winning seven of their final eight games.
• No. 25 Kentucky (9-3) returns after routing rival Louisville on Saturday. The Wildcats had a run of five weeks in the rankings.Who’s Out
• Wisconsin dropped out after its seven-game winning streak was snapped by Minnesota.
• UTSA tumbled out of the rankings after its first loss of the season. The Roadrunners were thumped by North Texas on Saturday to end their unbeaten regular season, but they will still host the Conference USA title game next week.

At Regions, Our Reputation Matters

In the End, Georgia Returns to No. 1

The Ratings are In