Every year, the Regions Center tower in Birmingham, Alabama, is transformed into a brilliant holiday display – with Christmas trees, a massive wreath and a giant stocking celebrating the season every evening.

The lights are visible for miles – from vistas along Red Mountain, to travelers crossing through town on nearby interstates, and to airline passengers about to land at the airport a few miles to the east.

“Every year, we’re asked how we do it, and while we’ve made a couple updates over time, the process is still very similar to the way it was in the late 1970s,” explained Emilio Cerice, Senior Vice President of Corporate Real Estate for Regions Bank. “The lighting display didn’t begin until the late 70s, but it turned out, the stage was set for the display about 10 years earlier.”

While the building was under construction between 1968 and 1971, Cerice said a light tube was placed in a small area above each window starting on the fifth floor. Initially, the idea was to light the building in bright white every night. But the energy crisis of the 1970s brought that to an end.

“The history of using the lights as a Christmas display started after the energy crisis was over,” Cerice said. “Back then, the building was owned by First National Bank of Birmingham and a company called Sonat – or Southern Natural Gas. The details have been hard to pinpoint, but it’s been said that a Sonat executive was in Houston and saw a building that used its ‘curtain wall’ design – similar to what we have – for a Christmas display. That executive came back to Birmingham and led the effort to get a display here.” 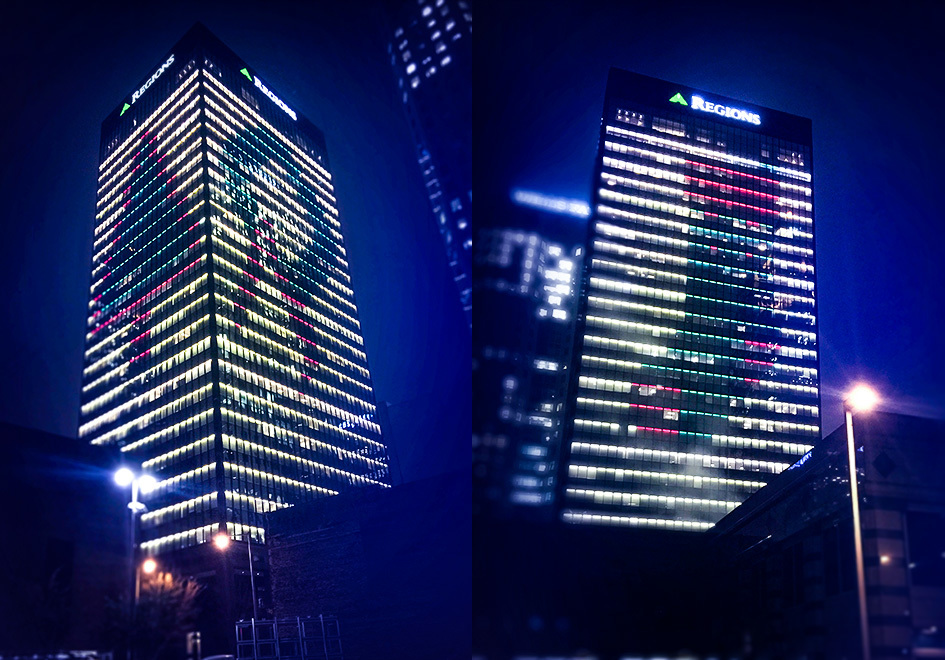 Over time, the building has gone on to carry the AmSouth name; then, following the 2006 merger of AmSouth and Regions, the Regions name and its updated logo were placed atop the tower. But through it all, the holiday lights have remained.

“It’s something we look forward to every year – and it’s something the city looks forward to,” Cerice said. “In recent years, it’s been fun to watch social media and see people sharing creative photos of the building or sharing their memories of coming downtown to see the lights.”

Preparations for the display get underway around late summer or early fall each year.

“The images are created by placing red and green ‘gel sleeves’ over the white light tubes above each window,” Cerice said. “Crews operate with a grid showing the pattern of the display on each side of the building, and that lets them know which windows need which colors. Then, they change the display in February or March every year to the golfer image that we display during the Regions Tradition golf tournament. That one uses some different shades of green, as well as blue, so there’s a lot of changing and re-changing of the gel sleeves that takes place.”

Testing of the Christmas display takes place during the early morning hours in the days before Thanksgiving. If needed, any corrections are made. Then, at 5pm on the day after Thanksgiving, the display comes to life. It remains illuminated until midnight each evening through Dec. 31.

“If you’re near a window from the fifth floor and up when the display comes on each night, it’s very noticeable,” Cerice said. “A lot of people like to try to figure out where their office is in the tree, or the wreath, or whichever side of the building they’re on. We had a team that moved offices two years ago, and not long after they moved in, they looked at the lights above the windows and tried to figure out, ‘So where are we within the tree here?’ They compared the colors of the lights to a video of the building on YouTube and determined they were almost halfway up the tree in their new offices.”

Besides the holiday display and the golfer, the tower has hosted two other displays.

“In 1991, there was an American flag and the letters ‘USA’ in support of those serving during the Gulf War. Then, in 1996, there was an Olympic torch and the Olympic Rings when Summer Olympic soccer was being played at Legion Field,” Cerice said. 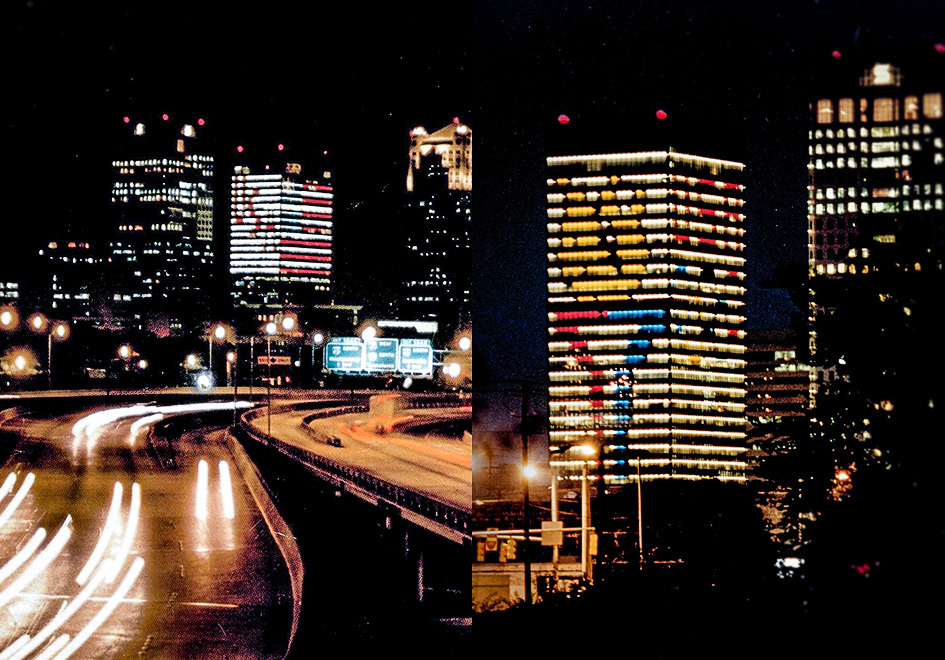 The Regions Center tower rises nearly 400 feet over 5th Avenue North at 20th Street North in downtown Birmingham. Some of the best views are from Birmingham’s Railroad Park, as well as from Vulcan Park on Red Mountain.

“Birmingham is our headquarters city. We’re proud to occupy a prominent spot in the city’s skyline,” Cerice said. “And we’re proud to carry on this tradition.” 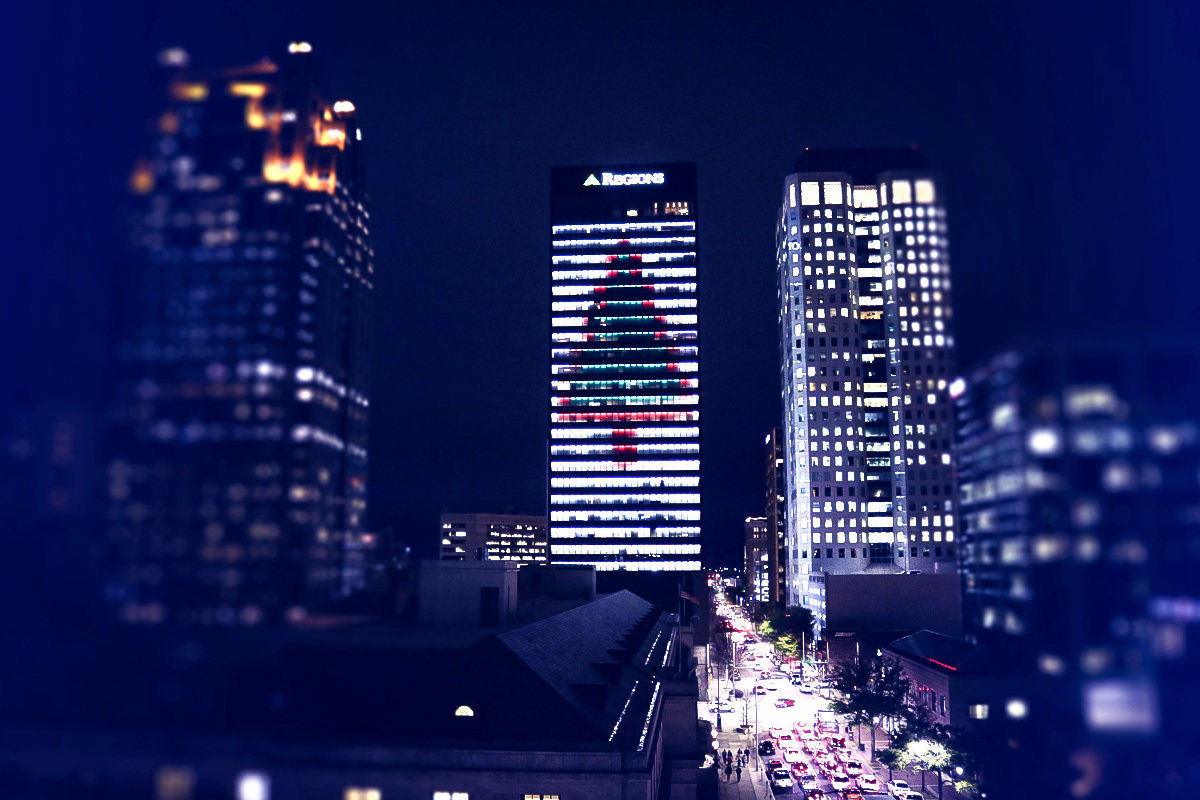 Sharing the Good: Recognizing the Resiliency and Strength of Small Businesses