For more than 57 years, Mary Lou Schlueter has been at the same job in Mascoutah, Illinois.

In the same building.

On the same street.

Three blocks from the house where she and her husband, Al, raised their two children.

“It just happened to fall into place that way,” said Schlueter of her status as the most tenured associate of Regions Bank’s about 1,300 branch offices. “It makes me happy every day to go into work.”

Branch managers have opened special green envelopes to hand out day-off vouchers and other treats and surprises to their teams. Each eligible* associate also got $100 in special pay for the week in addition to their regular paychecks.

“Mary Lou’s life and career are a great example of what we mean at Regions when we say our mission is to make life better for customers and create shared value for our communities,” said Mike Dennis, Midwest Consumer Banking Executive for Regions.

“She has given so much to Mascoutah, her customers and to Regions,” Dennis said, “We’re glad this week to have another opportunity to say, ‘thank you,’ to Mary Lou and all of Regions’ frontline heroes.”

Schlueter started at the bank on June 6, 1965, working fewer hours when her kids were smaller so she could serve as their classroom grade mother and increasing her hours as they grew and moved on to build their own careers and families.

She accumulated so many service pins that she turned to Reiniger Jewelers in nearby Swansea which created a ring and necklace so she could wear them all.

Mascoutah is not only Schlueter’s birthplace but still home to her children and their families, her four sisters, 17 great nieces and nephews and a steady stream of school, church and other friends who bank with Regions in Mascoutah.

“I’ve known Mary Lou since I was a child,” Funk said, “She was our room mother in school. She has volunteered for many years at our church picnic and found so many other ways to give her time for others.

“It’s always nice to walk into Regions and see her smiling face.  She always thinks of others and will ask how I’m doing and check to see if there is anything she can help me with. Mary Lou is one of the nicest people I know – thoughtful, respectful and compassionate to everyone.” 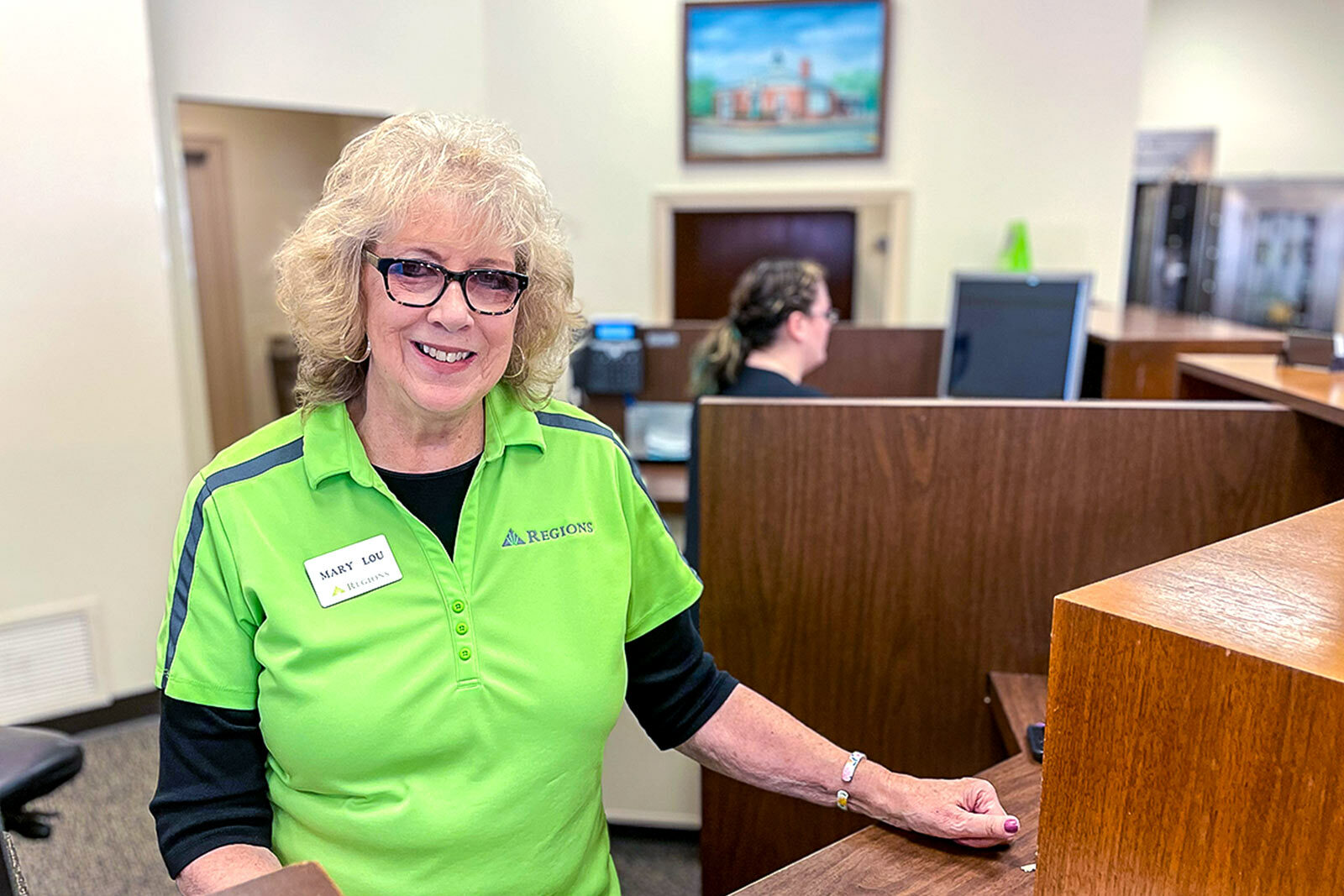 Financial Relationship Consultant Carolyn Simard said these qualities and more are what make Schlueter such a joy to work with and learn from.

“As a bank, we’re here to grow with our customers and help them build their own families and financial futures,” said Simard, who celebrated her first anniversary with Regions in August.

“Regions is a big part of that in Mascoutah in large part because of Mary Lou,” she said. “She’s such a pillar in this whole town and has built an incredible foundation of relationships and trust with our customers and the community.”

“We’re like a little family,” Schlueter said of her teammates. “After all, you’re with your work people more than with your actual family most of the time. We get to know a lot of things about each other, and we share, and it’s just a good day every day.”

Schlueter said her most important mission is finding out what customers come to the bank to do so they leave satisfied they succeeded.

“For me, being on the frontline for Regions means that I am there right away when the customer walks in the door,” she said, “to greet them by name and to guide them to whatever they need and whoever can best help them.

“When customers walk out the door here, I want them to feel like we cared about them.”

Branch Manager Lamont Sneed still marvels at Schlueter’s ability to remember so many names and make every customer feel valued.

“It’s important we provide outstanding customer service and that is led by Mary Lou,” Sneed said. “Her providing an introduction for the different customers with the bankers and building that rapport with customers based on those interactions carries a long way.”

Mary Lou’s life and career are a great example of what we mean at Regions when we say our mission is to make life better for customers and create shared value for our communities.
Mike Dennis, Midwest Consumer Banking Executive for Regions

‘A true legend of Regions’

Because of what Schlueter means to Mascoutah and Regions, Sneed and the branch team decided to honor her as a “Regions Legend” in the Mascoutah Homecoming parade — complete with crown, sash and corsage.

The parade is part of a weekend-long festival in August that the Mascoutah Improvement Association has used to raise thousands for the town’s parks since 1927.

“When I heard the association’s parade theme this year was legends and lore, I immediately thought of Mary Lou,” Sneed said. “She is a true Regions and Mascoutah legend. Everybody in the city knows her.”

That was proven again on parade day when, in the back of a truck driven by Al, Schlueter made her ‘Regions Legend’ debut down Main Street in Mascoutah and then up Sixth Street to Scheve Park.

“Mary Lou!” many parade watchers called out as she passed by. Two left their chairs for personal hugs and well wishes on the pavement.

“I enjoyed being a Regions legend,” Schlueter said of the experience. “Some people were wondering and asked me if I was retiring but I said, ‘No, I’m just a legend.’

“When people call me ‘legend’ I feel old but also honored that they think of me as that.  I just feel happy to be able to go to work — and to be able to work.” 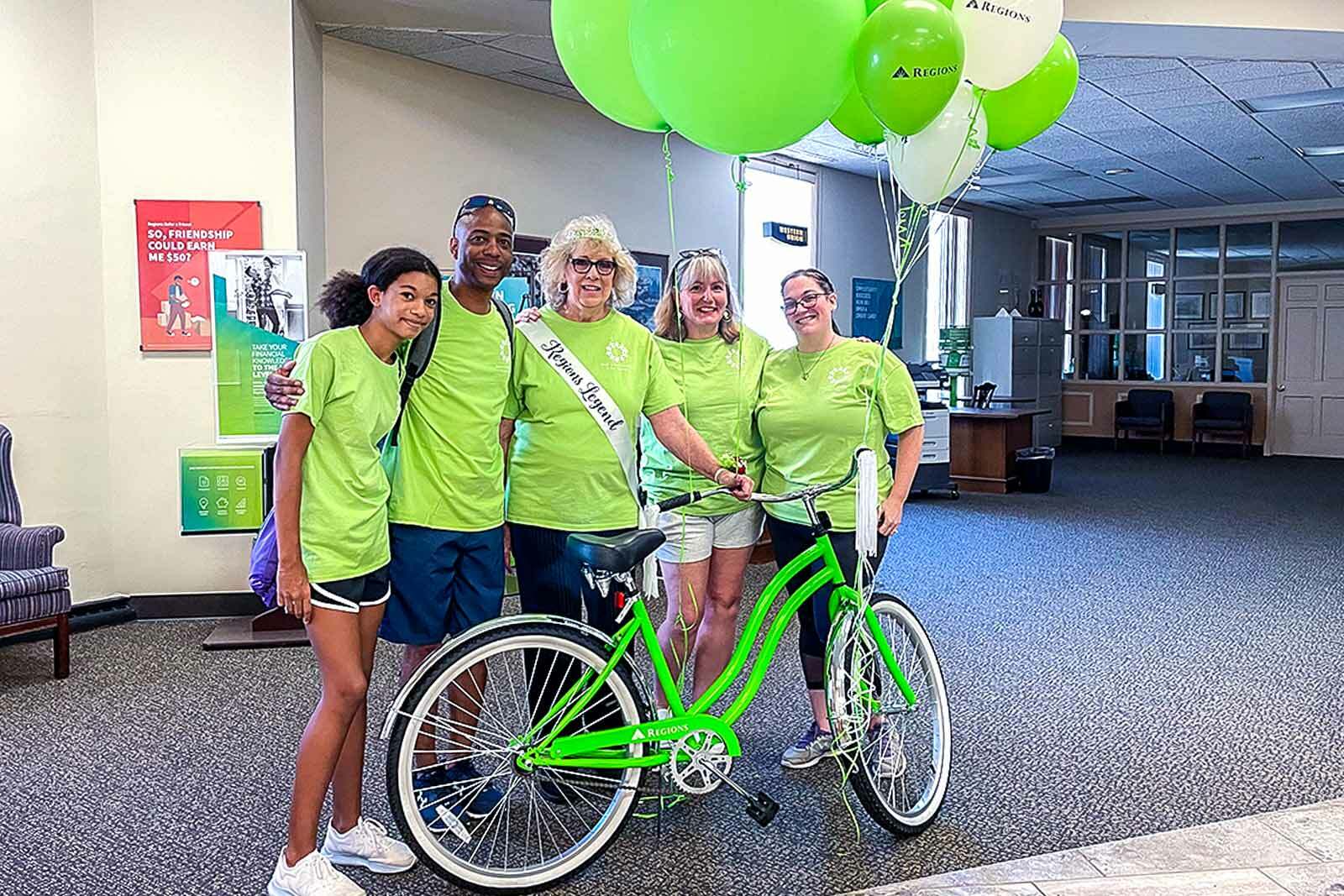 Georgia Remains a Solid No. 1 While Washington’s Back in the Mix