Safe drinking water. It’s something many take for granted. The moment you don’t have it, you realize just how important it is.

The need for access to safe, reliable drinking water is high in Jackson, Mississippi. The recent historic winter storm caused widespread issues with drinking water across the area.  While the city’s public works crews have been working tirelessly to repair the water system, community leaders stepped up to help as well.

WAPT-TV partnered with the Mississippi Food Network (MFN) to launch a water drive recently to provide cases of safe and clean drinking water to families across Jackson. People swarmed to water distribution sites – from Smith Wills Stadium in northeast Jackson to the Metrocenter Mall parking lot in West Jackson to the fire station in Byram to the south.  Lines of cars filled with people sometimes willing to wait hours for a truckload full of bottled water to arrive only to be emptied clean in 20 minutes.  It was a welcomed relief to those who had no water.

Regions Bank supported the effort with a financial contribution to the nonprofit. Addressing community challenges is a core mission of the bank.

“Our mission is to make life better in the communities we serve. From volunteerism to community engagement, we are here to help find solutions to the most pressing needs in our community,” said Robert Leard, Regions Bank’s Metro Jackson market executive.  “No one should be without safe drinking water – and I applaud WAPT-TV and the Mississippi Food Network for their efforts to alleviate this community-wide crisis.”

WAPT-TV President and General Manager Mike Neelly said the outpouring of support from the business community made the effort a success. More than one million bottles of water were collected. 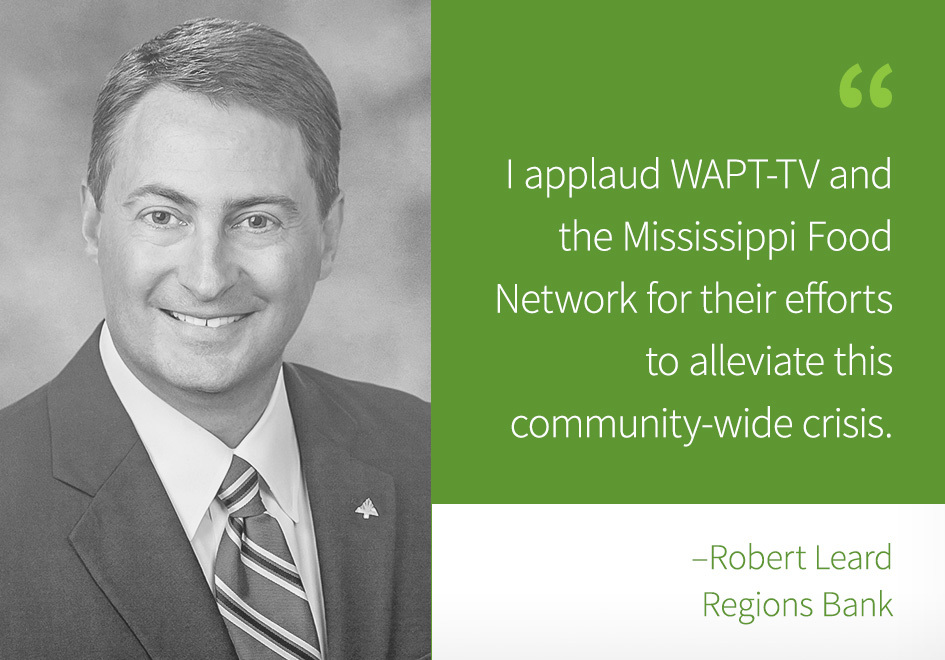 More than 300,000 bottles of water have been distributed with the remaining water stored in the MFN warehouse for future distribution. MFN Major Gifts Specialist Crystal Alfaro said Regions donation was important to the effort’s success.

“We are so grateful to Regions Bank for being a vital part of our first ever Water Drive 16,” Alfaro said.  “Regions and its employees are a huge reason that we will be able to provide over one million bottles of water to our neighbors affected by the water crisis over the past few weeks.  We thank Regions so much for caring about the communities in which they live and work.”

A New Plan for an Old Town Square

Finding What Makes You Tick