LSU is back, and the SEC West race suddenly looks a lot more interesting. Alas, we’ll have to wait two weeks to sort it out.

Elsewhere, Tulane is moving on up in the latest AP Top 25 presented by Regions Bank. Ole Miss is tumbling after a rough Saturday on the bayou and Texas is out of the rankings – at least for now. 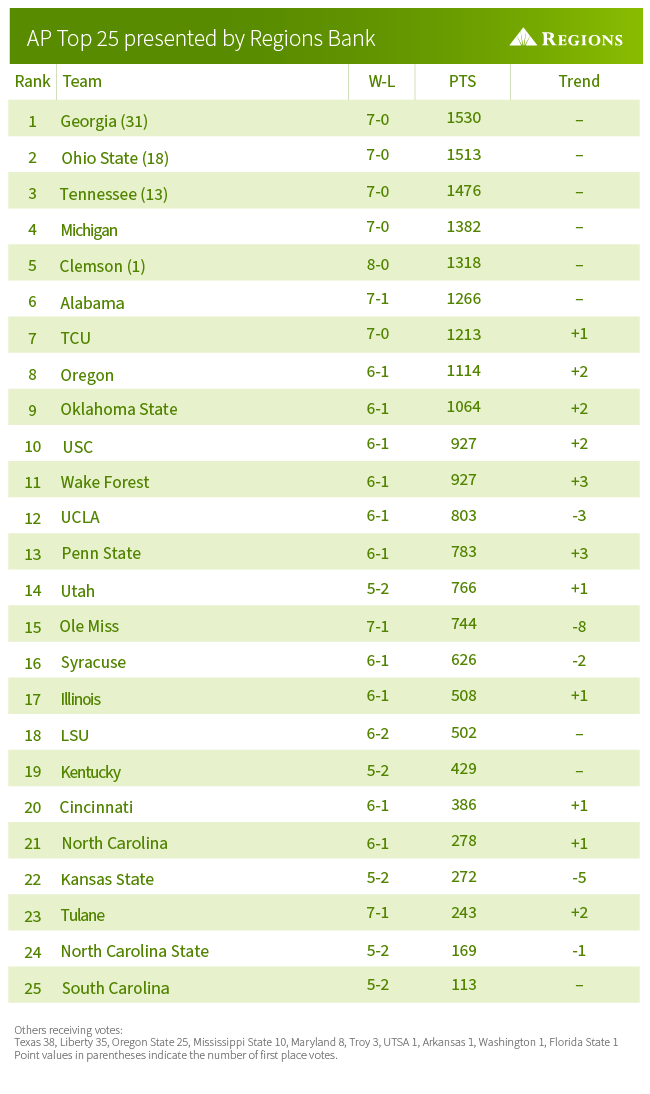 LSU re-entered The Associated Press College Football poll at No. 18 on Sunday and No. 25 South Carolina earned a ranking for the first time in four seasons.

The first six teams in the AP Top 25 presented by Regions Bank held their spots after either winning or not playing this past weekend.

No. 7 TCU moved up a spot after remaining unbeaten with a second-half comeback against Kansas State. Oregon jumped two spots to a season-high No. 8 after routing UCLA.

Oklahoma State is No. 9, followed by Southern California and Wake Forest in a tie at No. 10.

The Demon Deacons had never reached the top 10 in the AP poll until peaking last season at No. 10. Now they have done it two years in a row.

LSU, in its first season under coach Brian Kelly, handed Mississippi its first loss of the season in emphatic fashion and moved back into the rankings ahead of its game against Alabama on Nov. 5 in Baton Rouge, Louisiana.

The Tigers were ranked for a week earlier this month before losing to Tennessee. They improved to 6-2 by outscoring Ole Miss 42-3 after falling behind by 14 in the first half.

South Carolina, under second-year coach Shane Beamer, is ranked for the first time since a one-week stint after the opening weekend of the 2018 season. The Gamecocks beat Texas A&M to improve to 5-2. They have not been ranked this late in a season since 2013.

LSU moving into the rankings before its off week ensures that Tigers-Tide will be a matchup of ranked teams for the first time since the SEC West rivals played a 1 vs. 2 game in 2019.

Alabama is off next week, too.

The Tigers backslid after winning the national title in ’19 and were unranked when they played the Crimson Tide each of the last two seasons.

That snapped a string of 14 straight seasons in which LSU and Alabama were both ranked when they played.

After having a total of 11 games matching ranked teams the past two weeks, the next slate is not quite so juicy.