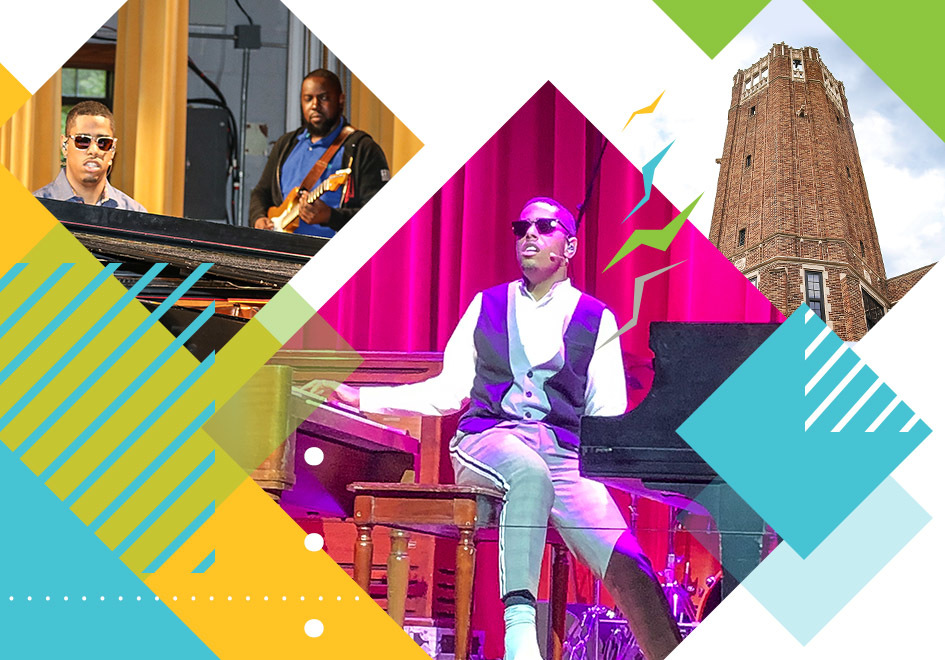 Pianist, organist, drummer and songwriter Matthew Whitaker refuses to allow blindness to hold him back from his aspirations.

Winning the Apollo Theater’s “Child Stars of Tomorrow” competition at age 9? Check. Returning to the Apollo one year later to open for Stevie Wonder during his 2011 induction into the theater’s Hall of Fame? Been there, did that and received a harmonica from the music legend when they met backstage.

And Whitaker has done it all without his sight.

The 18-year-old pianist, organist, drummer and songwriter was born with retinopathy of prematurity (ROP), a condition often affecting premature babies. It can cause vision impairment or complete blindness.

And Whitaker faced even higher odds stacked against him as a premature baby. Doctors gave him just a 50 percent chance of survival.

Now, Whitaker is more than surviving. He is thriving. And he refuses to allow blindness to hold him back. He enjoys skiing, rock climbing, bowling and playing video games, too.

“If you put your mind to it, you can do anything a sighted person can do,” he said.

This spirit of anything being possible is at the heart of the “No Limits” Arts Series project. The Indiana Blind Children’s Foundation and several Indianapolis arts agencies launched the project to foster greater inclusiveness for people living with disabilities through grant funding from the Lilly Endowment Philanthropic Foundation. Regions also served as a “No Limits” sponsor. The bank established its partnership with IBCF in 2016.

“Our primary goal in developing the ‘No Limits’ project was to bring unprecedented access to the arts in Indianapolis,” said Laura Alvarado, Indiana Blind Children’s Foundation Executive Director. “Through the voices and leadership of our students here at the Indiana School for the Blind and Visually Impaired, we are able to create an immersive experience for our entire community to enjoy.”

Whitaker’s quartet recently headlined the inaugural “No Limits Celebration” in the newly renovated ISBVI auditorium. Featuring a high-energy mix of jazz and improvisational riffs that kept concertgoers guessing what was next, Whitaker dazzled the audience – even simultaneously playing the piano and organ at times. Fans clapped all evening to Whitaker’s original material and covers of Luther Vandross and Earth, Wind & Fire, among other artists.

While the show was memorable, so was the day it happened. It was the 29th anniversary of the signing of the Americans with Disabilities Act.


“The essence of the ADA Act was to create a world that imposes no limits for people with disabilities,” said Kathy Lovell, Disabilities and Outreach Services Manager for Regions. “To hold this concert on the date this legislation was passed is a reminder of the importance of providing access for everyone – in the workplace, in the community and in simply enjoying life.”

Whitaker’s musical journey began at the age of 3 when his grandfather bought him a small keyboard.

“He started everything,” said Whitaker.

Whitaker taught himself to play nursery rhymes and began taking piano lessons at age 5, where he caught on quickly.

In 2017, Whitaker released his first album, “Outta the Box.” His second, titled “Now Hear This,” will be available August 9.

Whitaker’s quartet is touring America and performing three dates in South Korea. While he enjoys performing at every venue, he notes the group’s “No Limits Celebration” concert at ISBVI was especially meaningful.

“They put a lot into this show,” said Whitaker. “There needs to be more schools like this.”

“At ISBVI, we are focused on providing our students with the necessary skills to be as independent as possible,” said Superintendent Jim Durst. “Matthew exemplifies independence. Our school motto of, ‘Just because you can’t see the stars doesn’t mean you can’t reach for them’ was demonstrated during the quartet’s performance.

Whitaker spent time with a group of ISBVI students and parents before the concert. His key takeaway for students?

“Whatever you want to do – dance, sing, play music – keep at it. Don’t let your disability stop you.”

It’s a message that resonated with ISBVI graduate Kurt Stickradt and his grandmother, Karen. Kurt sings and plays piano, organ and guitar. His passion for music also began at age 3 in learning the piano by ear and by touch.

“I think tonight’s event offers encouragement and hope for Kurt,” said Karen. “He loves to perform.”

Kurt played and sang at the 2018 ISBVI commencement and the Indiana Blind Children’s Foundation “Through the Looking Glass” gala, events both supported by Regions.

His reaction to the “No Limits” concert? “I really enjoyed it!” Kurt said.

“Matthew gave the audience so much joy,” said Nimmer. “He really is an inspiration.” 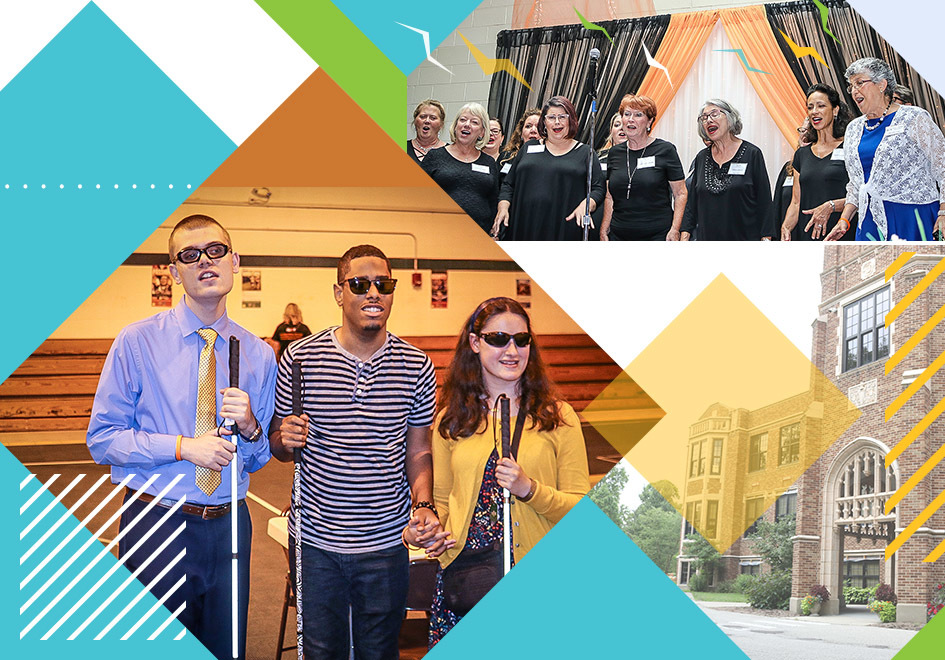 The inaugural “No Limits Celebration” was held in the newly renovated ISBVI auditorium on the 29th anniversary of the signing of the Americans with Disabilities Act. “The essence of the ADA Act was to create a world that imposes no limits for people with disabilities,” said Kathy Lovell, Disabilities and Outreach Services Manager for Regions.

Whitaker also serves as an inspiration to bandmates. The group had an “instant connection” when they met just last year. Drummer Isaiah Johnson recalls a conversation with guitarist Marcos Robinson immediately following their first session.

“I told Marcos, ‘We gotta practice,’” said Johnson. “We realized we needed to up our game to keep up with Matthew.”

In 2017, Whitaker picked up a new instrument, the vibraphone. He received it as a gift from Ellen DeGeneres after appearing on her show.

This September, Whitaker will take his music education to the next level when he attends The Juilliard School in New York. He’ll be blazing a new trail and surpassing expectations yet again as the first blind student to enroll in the school’s Jazz Studies program.

Whitaker is on a continuous quest for improvement. “You can never learn too much,” he said.

Encouraging lifelong learning and fostering independence have been key elements of the ISBVI and Regions partnership from day one. The collaboration also reflects the bank’s key priorities of advancing education and supporting diversity and inclusion initiatives.

“This school connects students with resources and opportunities to experience things they may have only dreamed were possible,” said Schiela Peña, Community Relations Officer for Indiana. “Matthew’s determination encourages all of us to reach higher.”

With aspirations that include film scoring, one thing is certain – there are absolutely no limits to what Matthew Whitaker’s musical future holds.