Emily’s Place is a nonprofit serving North Texas families affected by domestic violence. Calls for help have more than quadrupled during COVID-19.

A dwelling where broken hearts are mended.

It’s what happens at Emily’s Place – for clients and volunteers.

“I needed something to feed what I was about to lose,” said Angle, Dallas-based Commercial Banking Regional Executive for Regions Bank. “Mark Hagan came along in my life at a good time, and so did Emily’s Place.”

Angle’s brother was battling a brain tumor. The outlook wasn’t good. It was then when Angle’s path first crossed with Hagan’s.

“In those moments, you can learn what you don’t want to be,” said Angle. “It’s an opportunity to find a passion for things that really mean something for others, rather than for you.”

After his brother’s passing, Angle channeled his newfound passion for service into Emily’s Place, a nonprofit dedicated to helping families break the cycle of domestic violence. Emily’s Place provides a family-like group environment where women and children receive around-the-clock support.

While Emily’s Place provides shelter for survivors, it serves more as a bridge back to the community for families living there for up to two years.

And, importantly, Emily’s Place is a haven where hope is a constant and lives are transformed.

Mark Hagan made sure of that. That’s because Hagan, too, was seeking something more meaningful when he founded Emily’s Place.

“I had completed a ‘Take a look at your life’ course,” he said. “I had never intended to get into nonprofit work, but I was searching for a way I could live every day in my purpose for greater fulfillment. My grandfather’s work with a transitional living program for women and children was an inspiration. And I’m now blessed with the ability to do the same.”

Lately, that ability is even more important during a pandemic-related surge of domestic violence. With people quarantined around-the-clock, on top of health concerns, job losses, and financial stress, calls seeking respite from abusers have significantly increased.

“It’s really startling the longer this goes,” said Brynn Bruno, Emily’s Place Executive Director. “Our website visits have been off the charts; we’ve had more than a 400% increase in calls and a 300% increase in applications.”

Angle worries the need is even greater.

“This is a problem much worse than the numbers prove,” said Angle. “There are people we don’t see who go back because it’s so difficult to cut the cord to get to healing and happiness.”

“Some people will say, ‘Why can’t they just leave?’” said Hagan. “But think about everything they lose to leave – their family, church life, transportation. Many women often have to give up nearly everything that is a part of their life.”

If you’re feeling overwhelmed by those odds, remember that Emily’s Place serves as a beacon of hope. Even the nonprofit’s growth from its humble beginnings makes any doubter a believer.

“Our first home had a leaky roof,” said Hagan. “And our first golf benefit was played on a dirt course,” adds Angle. As Emily’s Place has grown, so, too, has the deep friendship of two men who can finish each other’s sentences.

Hagan credits volunteers like Angle, with whom he can go “shoulder to shoulder” in helping build Emily’s Place to what it’s become.

“Sometimes, people are long on promises but short on follow-through,” said Hagan. “To have volunteers who show up and do the things they say they’re going to do is energizing.”

“You can’t tell Mark ‘no,’” laughs Angle. “Mark brought in people to volunteer, and that’s when things grew to the next level.”

Angle has also brought people into Emily’s Place, including his now-grown daughter. She first attended an event supporting Emily’s Place was when she was 6.

“I’ll never forget driving home from the event,” reflects Angle. “Darby’s lip was quivering. She said, ‘Daddy, they’re not like us.’ When I asked what she meant, she replied, ‘They hurt.’ It broke my heart.”

After serving 14 years on the Board of Directors, Angle moved to an Advisory Board role in 2017 so he could introduce a member of his work family to Emily’s Place – Rudy Walker.

Walker, the Consumer Banking Manager for Regions in Dallas, and Angle are cut from the same cloth – thoughtful servant–leaders. 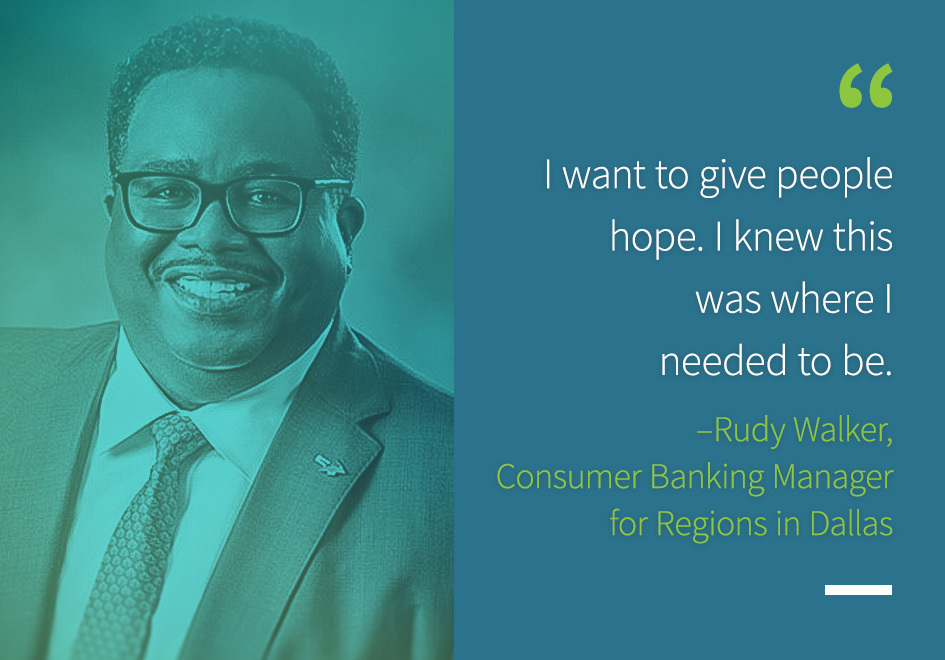 “Early on, they were sizing me up, asking, ‘Who is this guy?,’” laughs Walker. They soon learned he was relatable in talking about finances. And someone they could trust.

“I told them, ‘You’re not alone,’” said Walker. As the sessions continued, they even challenged Walker to practice the cost-cutting measures they were.

“You could their see confidence build,” said Walker. “I want to give people hope. I knew this was where I needed to be.”

“I could see Rudy’s passion,” said Angle, knowing he’d made a philanthropic match.

Regions Bank, a longtime Emily’s Place community partner, is also lending its financial support. The bank recently provided a $6,000 donation to the nonprofit.

“The work that Emily’s Place does to help families affected by domestic violence has always been important,” said Terry Wade-Ottley, Community Development Manager for Regions in Dallas. “But the heightened incidents of abuse during COVID-19 have created a larger and even more urgent need for a space that offers faith, hope and health for women and children.” 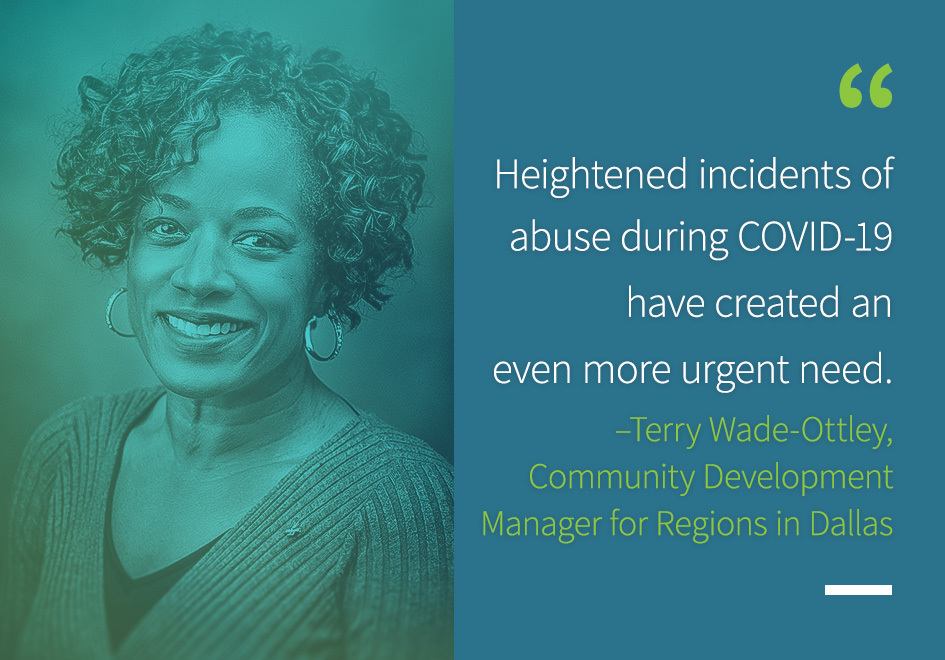 “I always look for the biggest item on the list,” Walker enthusiastically notes. “The bicycle, the radio control cars. And I buy the best. I buy what I would have wanted as a child.”

“It’s a feeling of, ‘We did it,’” said Walker. “We made them forget about everything for a few minutes.”

Being able to forget about difficult times is something Marc Angle can appreciate.

“Emily’s Place gave me purpose,” said Angle. “It gave me a way to heal and get through a very tough time. All you have to do is go to the house to see how blessed you are.”

Confirmation there’s beauty and promise on the other side of a broken heart.