In honor of Women’s History Month, Doing More Today is focusing on women-owned small businesses that make an impact in their community.

Amanda Stegall was 19 when she started at McGraw Rental & Supply, the one-stop power equipment shop located in Ridgeland, Mississippi.

She had already earned her CNA from nursing school but wanted to try something different. So, she tried everything McGraw Rental had to offer – starting with accounts receivable, moving to accounts payable and finally (well, not quite) office manager.

“They gave me more and more work to do,” Stegall said. “It was a numbers game because I do it all – taxes, tax forms. It was challenging and I liked it. And we were so small it didn’t feel like I was coming to work every day.”

Her original intention was to try something new. Instead, she found a lifelong profession. Then, just a few years ago, she decided to make another move.

She’d served as office manager for 10 years when the owner decided he had enough and was ready to retire. He shared his intentions with Stegall, who didn’t waste any time seizing the opportunity.

“I told him if he was serious, I’d like to buy the company,” she said.

The declaration was the easy part. To pull it off, she needed a brain trust. She turned to a pair of Regions bankers: Scott Parrish, a commercial relationship manager in Ridgeland, and Megan Owens, a Small Business Administration banker based in Mobile, Alabama.

I’ve struggled a lot, and we’ve been through a lot, but I always believed that if you work hard, you can achieve what you want.
Amanda Stegall

“We started working on the business deal in March of 2019, and began pulling everything together,” Parrish said. “She closed on that in August 2020, when ownership was transferred to her. We then teamed with Treasury Management to give the company more banking options.”

Going from office manager to owner proved to be an intense project. But 20 years of sweat equity soon paid off for Stegall.

“Scott was who I called when I needed anything, anytime of day,” Stegall said. “And we’re still talking about possibilities.”

The married mother of three, Stegall has made her way on her own since high school. But where others might have seen an impossibility, she considered the jump from employee to corner office a tantalizing opportunity.

“I’ve never been scared to try something,” she said. “My drive comes from being on my own at a really young age, when everyone said I wouldn’t make it. And look at me now.”

It hasn’t always been idyllic. She and her husband have been married 20 years and together much longer.

“I’ve struggled a lot, and we’ve been through a lot,” she said. “But I always believed that if you work hard, you can achieve what you want. Plus, I’m bullheaded as all get out.” 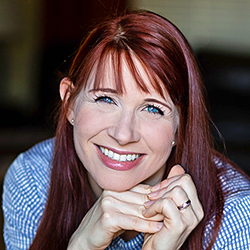 We get to finance the American dream. And Amanda was a dream to work with. She embodies the spirit of entrepreneurship with devotion and grit. I’m proud of her and all she has accomplished!
Megan Owens, Small Business Administration banker

Her focus now is employee centric – a carryover from her time as a new employee. She knows the job and what they offer to customers as well as anyone. “I can run all the equipment,” she said. “It’s a male-dominated business, so you’d better be able to prove yourself.”

With Owens, she has an advocate she trusts – something that’s important for any successful business.

“These types of transaction are my absolute favorite,” Owens said. “We get to finance the American dream. And Amanda was a dream to work with. She embodies the spirit of entrepreneurship with devotion and grit. I’m proud of her and all she has accomplished!”

Stegall said that she went through a couple of banks before landing at Regions and meeting Owens – proof that relationships matter for small-business owners.

“She’s the whole reason this dream became a reality,” Stegall said. “We’d talk to midnight trying to get everything in order then hit a brick wall – and she’d break through it. When I got frustrated, she calmed me down. I absolutely love her. She went over and beyond to help me get here.”