It’s the most wonderful time of the year – the temperatures are dropping, and consumers are shopping. This means that Richard Moody, Regions Bank’s chief economist, is hard at work. He recently completed the November Monthly Economic Outlook, which would typically serve to estimate how much consumers will spend over the holiday shopping season.

At least that’s what happens in a normal November.

The New Normal?
For the second year in a row, things are so far from normal at the start of the holiday sales season that it’s hard to know what normal even means anymore. Perhaps things have settled into a new normal, where the only thing normal is that nothing is normal. For the second pandemic-influenced year, rather than sharing his usual holidays sales forecast, Moody takes a deep dive into spending trends, seasonal hiring, and sustainability of holiday retail trends.

“Between spending on goods having been pulled forward in 2021, supply chain and logistics bottlenecks holding down spending on goods over recent months, spending shifting back toward services, and sharply higher goods prices, there will be considerable noise in any measure of 2021 holiday season sales,” said Moody.

In the November Monthly Economic Outlook, Moody discusses what he sees as the most relevant patterns in consumer spending. Additionally, he dives into holiday season hiring patterns, which appear to be as disrupted this year as spending patterns.

“Holiday-related hiring in retail trade and warehousing/distribution services got off to a solid start in October but, given pressing labor supply constraints, it remains to be seen whether actual holiday-related hiring in 2021 will measure up to the ambitious plans announced by many large retailers and delivery services,” said Moody.

Read more from Moody’s November Monthly Economic report: No No No … Holidays Sales Forecast This Year Either. 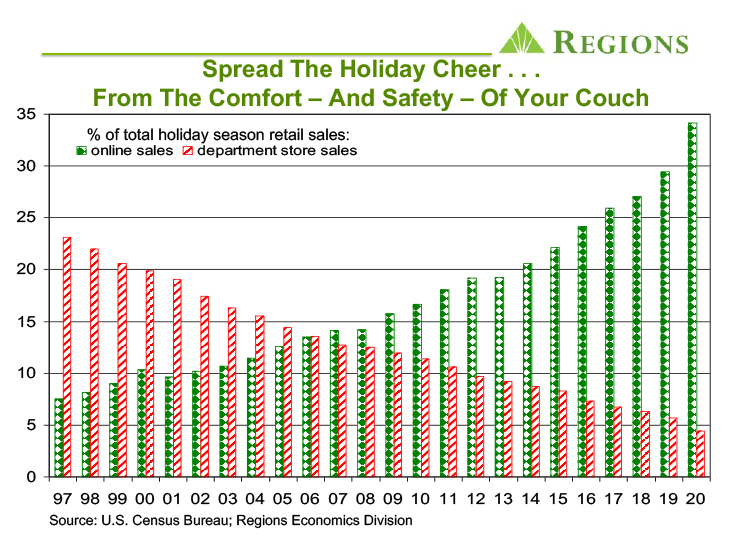 How ICCC is Strengthening Small Businesses