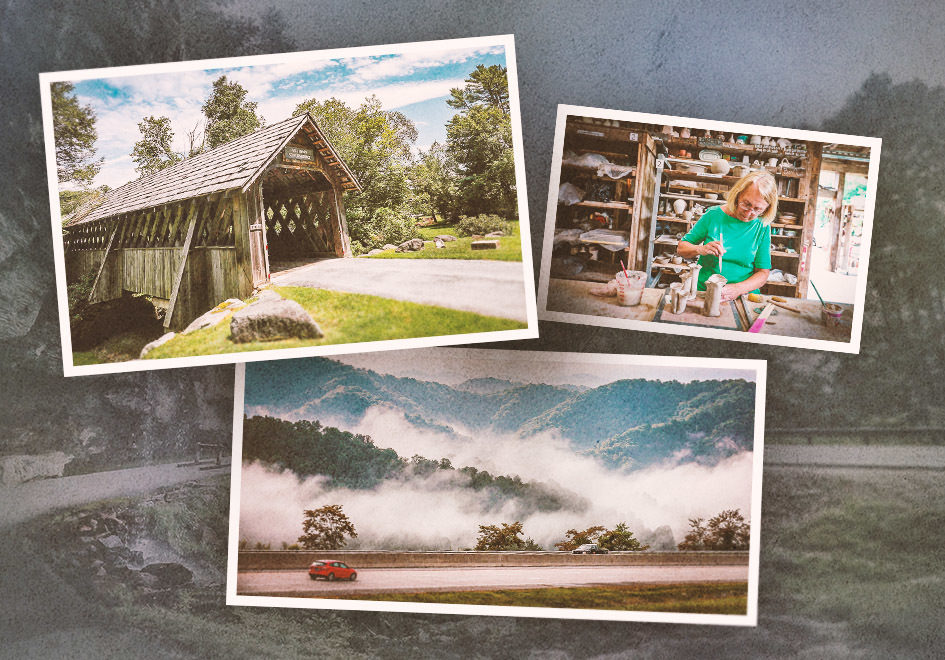 The drive to Highlands, North Carolina, from East Tennessee takes you through Asheville, with spectacular vistas lining up in succession like dominoes. But the best is yet to come: the 20 miles of hairpin turns as you wind your way along Highway 64.

The Cullasaja River flows to the right as you begin the climb, offering a distraction as you try to keep the car on the road. It’s not a hazardous drive, but there are some white-knuckle moments, like when the car clearly marked “Student Driver” nervously approaches you in the other lane.

Opportunities to savor the view are plenty – without careening into the gorge way below. You can pull over and go on a natural waterslide at Bust Your Butt Falls, take a wet selfie at Bridal Veil Falls or exit for a hike at Ranger Falls Loop Trail. At Dry Falls, you take the calf-burning hike down to go behind the tumbling water, an immersive experience that may be the best this side of Niagara. That’s what lured Jack and Kay Henson from their home in North Alabama.

“We love the mountains,” Kay explains as the mist of Dry Falls envelops her. “We usually go to Pigeon Forge and Gatlinburg (Tennessee), but we wanted to come to Cashiers and Highlands this time to see what it’s all about. How can you top this?”

Playground for the Affluent

In 1875, Samuel Truman Kelsey and Clinton Carter Hutchinson drew lines from New Orleans to New York City and Savannah to Chicago. The entrepreneurs felt the place where the lines intersected would become a commercial crossroad. When they visited this area along the Nantahala National Forest in Western North Carolina, they gave the town a name with a natural fit: Highlands.

While the town’s year-round population never reached the peak envisioned by Kelsey and Hutchinson, its identity as an idyllic hamlet perched high along an Appalachian plateau draws substantial volumes of tourists who come seeking one, or both, of two distinct seasons: summer (here, defined as March to November) and winter.

‘The Mountains are Spiritual’

Marnie Merrell left Middle Tennessee three years ago. “I wanted to start a new life,” she says. “I wanted to live in the mountains, so I found a cabin in the woods. And I love everything about it here – the weather, the people, the shops, the creativity. The waterfalls are gorgeous. The mountains are spiritual.”

On a sunny afternoon, Merrell is working at Silver Eagle Gallery, a showroom on Main Street offering Native American jewelry and gems.

Customers ebb and flow as tourists stroll Main Street, the commercial heart and soul of this mountain retreat. It’s filled with restaurants and quirky gift shops, as well as inns, churches and small parks. If Hollywood wanted to capture an unspoiled small-town atmosphere, the first stop would be Main Street.

Ken Franklin works at T.J. Bailey’s, an upscale boutique around the corner from Silver Eagle. Franklin grew up in Jacksonville, Florida, attended Florida State and eventually moved to Western North Carolina five years ago. But his family roots run as deep as Dry Falls. His great-grandmother built a cabin in Cashiers after World War II, and his mother used to make the annual summer road trip from Miami to enjoy the mountain views.

“It’s much more laid-back here. The climate’s better,” Franklin said. “I grew up in Florida, and the weather never bothered me. But, now, I wonder, how do you live in that humidity?”

Franklin has an easy smile and is quick to make a customer feel welcome, even though the populace turns over by the week. The smooth manners aren’t mere salesmanship. “When you live here, you can’t help but be in a good mood all the time,” Franklin says.

Sunrise, Sunset from a Mountain Top

No matter where you go in and around Highlands, it’s all about the breathtaking views. With apologies to everything the community offers, there’s none better than atop Ravenel Park.

Part of a land trust gifted to the region in 1914, Ravenel Park offers a moderate hike from either the parking lot to the plateau. Sunrise Rock faces east, of course, and nearby Sunset faces opposite. Both offer views for miles, as well as an awe-inspiring sense of wonderment if you time your excursion to meet the sun’s arrival or farewell.

As you descend, you can catch your breath at Highlands Biological Station, a research and teaching lab focused on the Highlands Plateau, which locals say is the crown jewel of the Appalachian range. It’s also the site of the Highlands Botanical Gardens, which offers another fun, meandering hike and many great places to sit and relax.

Nearby Whiteside Mountain, between Highlands and Cashiers near the Georgia border, is a moderately challenging day hike with a two-hour loop to see the highest cliffs east of the Mississippi River. Just get there early as parking is limited. Again, the views are fantastic, but there’s enough room to feel safe on the mountainside of the trail if you fear heights.

On the northwest edge of downtown, as you head back toward Lake Sequoyah, a refugee for painters and sculptors awaits. Covering 6 acres, The Bascom :: A Center for the Visual Arts sits on the old Crane horse farm, offering a park-like setting, galleries and a unique entrance via the Will Henry Stevens Covered Bridge.

Inside the Dave Drake Studio Barn, aspiring artists work with a ceramics instructor. The wide-pine floors reflect the original 1830 property. But the artwork reflects styles from across the ages and the Appalachians.

“The Bascom has been part of the Highlands community for over 30 years,” offers Teresa Osborn, the Executive Director. “Ten years ago, we moved into this campus. We now have 800 members, many of whom are second-home residents. We are a community – the entire plateau loves the arts.”

The expansive facility includes exhibition galleries, a gift shop and research library, all of which lure not only tourists but also grad students. The Horst Winkler Walking Trail includes native flora, a babbling brook and – what else in Highlands? – a waterfall and scenic views.

Corey James works in different mediums. He once sought art of all kind, taking a six-month, cross-country trip from his hometown of Los Angeles. “I was snapping pictures for inspiration, then I landed here.”

Here is the Corey James Gallery on South Third Street, just two blocks from The Ugly Dog Public House. The side yard of the gallery is filled with sculptures, including bronze and marble statues. Inside is an eclectic maze of works from artists local and far. There’s a century-old painting of a former homeowner, now for sale. And there’s his own “hurricane-style” work, made of glass, seashells and sand strewn by Hurricane Wilma — the storm he encountered living in Fort Lauderdale that prompted him to make Highlands his year-round home.

He never looked back.

And for the first-time visitor or the seasoned veteran, the affect is the same. You arrive, you explore, and you leave, but only after planning to return.