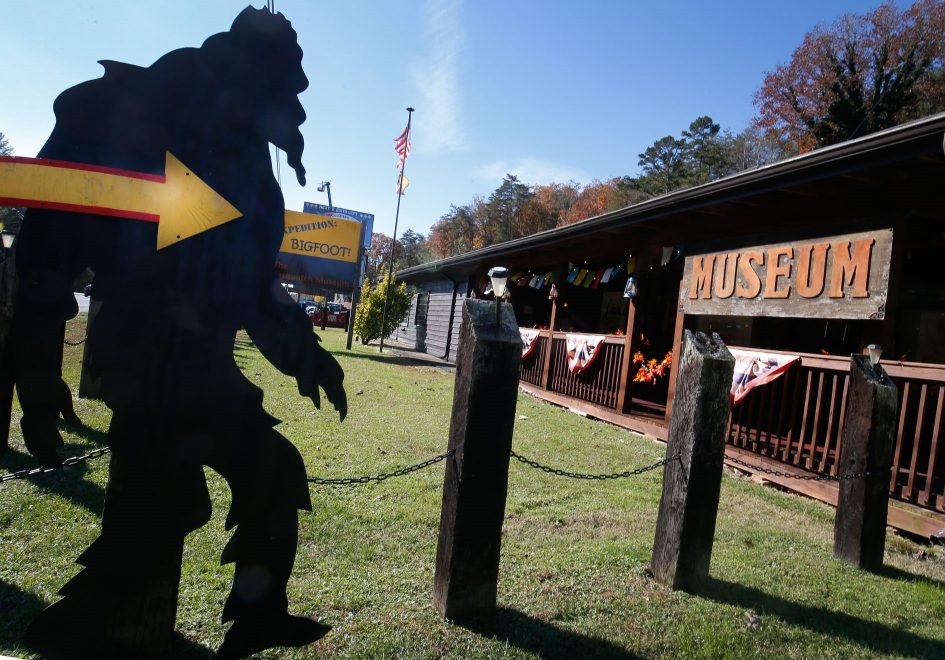 Nestled in the mountains that mark the start of the Appalachian Trail, Blue Ridge is known for its beauty and at least one out of the ordinary neighbor./GARY TRAMONTINA PHOTOS

The Cherokee were the first to give a name to the Blue Ridge Mountain chain that stretches from Pennsylvania, through Virginia and the Carolinas, and extends nearly 100 miles into Georgia. They called it Sa-koh-na-gas, meaning blue, for the soft azure haze that appears to wrap the peaks and ridges of the southern end of the Appalachian chain.

Within its reach across north Georgia is the quiet town aptly named Blue Ridge. Here, in the heart of the Chattahoochee National Forest, nature is at its finest.

One would expect to find an outdoorsman’s paradise with world class fishing on its vast waterways and abundant hiking and mountain biking opportunities in its forests, including the start of the 2,000-plus-mile-long hike to Maine’s Mount Katahdin, known as the Appalachian Trail.

But this mountain town with all of its natural allure, also holds the delightfully unexpected. Downtown Blue Ridge bustles with tourists when the leaves change in autumn. But the town also attracts visitors during its many festivals, including the Wine & Jazz Festival, the Fire and Ice Chili Cookoff, and the Troutfest & Outdoor Adventures. Mercier Orchards is a fourth-generation, family-owned apple orchard in Blue Ridge where visitors can pick their own strawberries, blueberries, peaches, plums, nectarines and a wide variety of apples, depending on the season. The orchard is also a wildly popular wedding venue.

A River Runs Through It

It is the last day of William “Bill” Oyster’s six-day bamboo rod-making course where eight anglers of all skill levels have gathered in his workshop at Oyster Bamboo Fly Rods to learn how to handcraft their own bamboo fly rods. The classes are offered about once or twice a month and fill up a good year in advance. This evening, the finished rods will be presented to each participant by Oyster in a low-key, yet meaningful, ceremony.

“It’s the romance of it, really,” says Chris Williams of the process, carefully wiping down his freshly stained rod. He has taken the class twice now, this time with his stepson Dean Crisler. “The rod I made last time is still my favorite.”

The shop in downtown Blue Ridge, run by his wife Shannen, sells an assortment of Oyster’s traditionally styled reels, lines and accessories. A window gives a peek into the workshop where the group works quietly and diligently. Some have reserved cabins for the weeklong class. Others have rented a room in the modest Cast and Blast Inn upstairs. When classes are not in session, the rooms are available to the public. Bill Oyster personalizes his bamboo fly rods with engravings he creates himself.

Oyster didn’t set out to make fly rods for a living. The opportunity came to him 20 years ago after a nasty training accident ended his career as a professional competitive cyclist. He decided to turn to his then-hobby of making bamboo fly rods into a full-time job, honing his skills in the basement of his Gainesville, Georgia, home. His custom rods were soon in high demand. Not long after, he decided to help others make their own fly rods. Ten years ago, the couple relocated to Blue Ridge.

When President Carter commissioned Oyster to make a bamboo fly rod with the Presidential Seal hand-engraved on the reel seat hardware, Oyster learned how to engrave rather than outsourcing the job. He now engraves the nickel hardware for each workshop participant’s rod, whether they choose a mountain scene, a prized trout, or a dearly departed golden retriever.

All said and done, Blue Ridge was the perfect location for the Oysters to open shop. Blue Ridge is the Trout Fishing Capital of Georgia, with the Toccoa River offering some of the most pristine trout streams in the state. It feeds into Lake Blue Ridge, and onward to the Ocoee River. These waterways are also prime for other activities like kayaking, white water rafting, and swimming.

David Bakara holds the rope that separates the gift shop from the entrance to Expedition: Bigfoot! The Sasquatch Museum, a 4,500-square-foot space filled with Bigfoot artifacts. He stares into the small crowd waiting to enter, wide-eyed without a glimmer of doubt in his voice.

“There’s no fiction in there.”

He says the words with such conviction that it could raise curiosity in the minds of even the most diehard skeptics. Bakara truly believes the hairy, upright-walking, ape-creatures are real. And he has the massive footprints and rear-end casts; handcrafted gifts they leave behind; and some excrement to prove it. David Bakara provides a visitor with the history of the Bigfoot Museum. A casting at the Bigfoot Museum could make anyone a believer.

Among his collection are life-sized replicas of Sasquatch and a map of reported sightings of the elusive creatures in wooded areas across the United States. He says he receives eyewitness reports at least every weekend. About 40,000 people – many believers – visit the museum each year since it opened three years ago.

“When we first opened, my wife said we’d get a lot of skeptics. But I said we’d see what happens,” Bakara says. “I’d say that if there are skeptics who come here, 99 percent don’t express it or are at least open to the idea that Sasquatch are real.”

What Bakara hopes visitors go away with is the same sense of wonder he had as a child after watching “The Legend of Boggy Creek,” the 1972 horror docudrama about a bigfoot creature that rambled around a small town in Arkansas. “It made me a believer,” he says.

While Blue Ridge’s abundant wilderness seems an ideal place for Bigfoot to wander, visitors are more apt to find chimpanzees here, specifically at the Project Chimps compound just north of town. The 236-acre forested sanctuary currently houses 59 chimps retired from research, and provides them with lifelong care. In time, sanctuary expects to care for more than 200 chimps from private research facilities.

Dawn DiLorenzo, the sanctuary’s longest-serving volunteer, knows most of the chimps by name. She jumps up and down at the window of the one villa calling to two chimps whose curious faces stare back. It’s breakfast time, but their vegan diet of green bell peppers doesn’t keep them from leaning in close to the glass and engaging DiLorenzo.

“They know my voice,” she says, proudly. Project Chimps provides a much-needed refuge for animals formerly in captivity and is respected internationally for its efforts./PHOTO COURTESY OF CRYSTAL ALBA/PROJECT CHIMPS

The chimps are kept in villas that surround an encased outdoor area where they are let out to wander and play. For many of these chimps, this is their first introduction to the outdoors since most have been born in captivity. And because of their confined upbringing, they will never be able to live on their own.

Tours of the sanctuary are available to high-level donors and to the public on special occasions like Chimp or Treat in October, or one of the Discovery Days in May and September.

The earth-shaking rumble of a 15-ton, FV4202 military tank rolls over a mountain of mud as the eight camouflage-clad passengers aboard brace themselves. Back at the military truck that serves as the office of Tank Town USA, a spectator in leather chaps watches and offers color commentary of the tank. “He’s going right into that big puddle there, see?” And the driver does, sending a wave of brown water into the air to the roar of its more than a half dozen riders.

This is Todd Liebross’ playground. “Just a random thing out there,” he says of the junkyard-like mud field off the Appalachian Highway. For $150, he – the only employee – lets guests drive tanks or excavator equipment around the muddy field. For substantially more money, they can run tanks over cars. At Tank Town USA, you can drive heavy equipment through the mud — and over cars, if you’re willing to pay extra. If tanks aren’t your cup of tea, a shooting range allows an opportunity to test marksmanship during the visit.

“We drive tanks and crush cars,” he says, simply. And he’s garnered a lot of attention for it in the six years he’s been open. Recently, he had a visit from Ozzy Osbourne as part of the A&E show “Ozzy and Jack’s World Detour,” and was featured on Fox & Friends morning show.

Each year, about 300 cars are crushed at Tank Town. And since Liebross added machine gun shooting to his arsenal of offerings a year and a half ago, guests have gone through more than 50,000 rounds of ammunition. There’s hardly a weekend that Liebross doesn’t have reservations from folks eager to feel the rush of driving the powerful machinery or shooting such a dangerous weapon.

Judging by the open-mouthed spectators who stand in awe of the massive tanks or startle at the distant rat-tat-tat of the machine gun, Tank Town is a welcome addition to the recreational activities available in Blue Ridge.

Liebross humbly agrees. “What else do you need in a town,” he asks, “besides a Bigfoot museum and a tank-driving place?” Need a place to stay? Rental cabins are plentiful, including the Blue Ridge Treehouse at Bear Claw Vineyards, a two-story treehouse built 15 feet above the ground by DIY Network’s The TreeHouse Guys. One of the best ways to take in Blue Ridge is aboard the vintage train at the Blue Ridge Scenic Railway. Four-hour, round-trips start at the century-old depot downtown and winds along the Toccoa River. 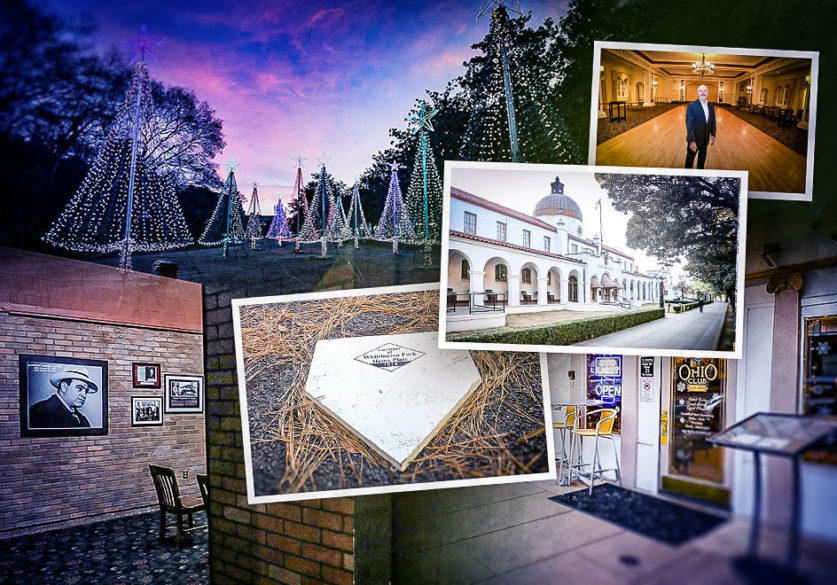 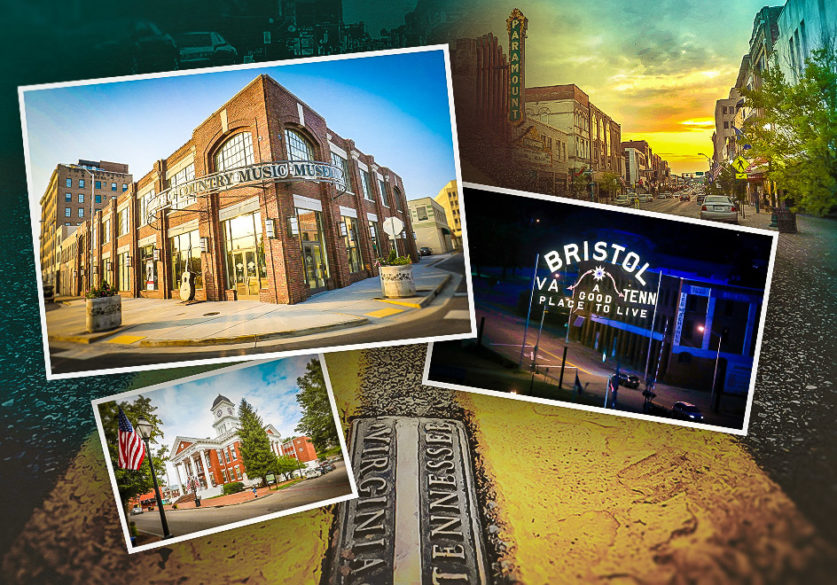 Surrounded by majestic mountain views, this part of the country produced explorers and presidents while providing the soundtrack of a nation. 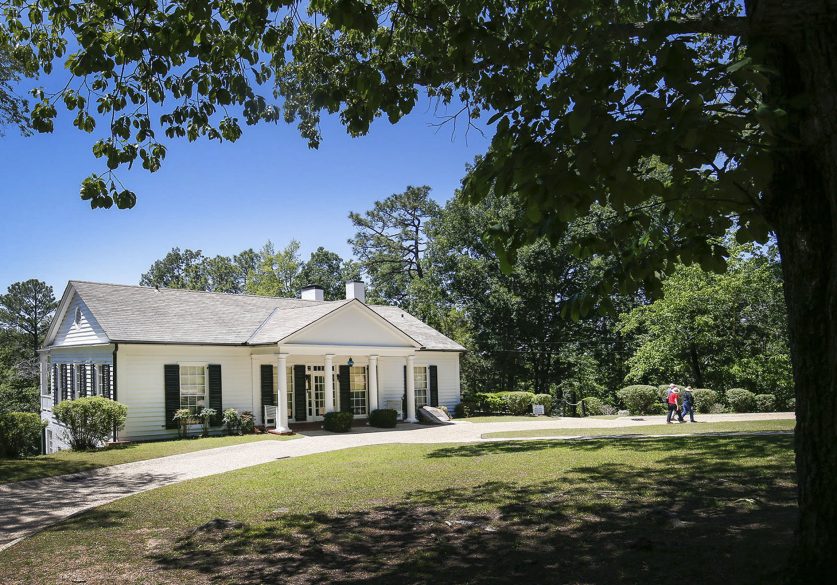 The town that healed FDR and, in turn, changed the world.