One Huntsville, Alabama couple’s visionary gamble led the charge for the neighborhood revitalization that would later grow up around their downtown pizzeria.

Greg and Samantha Hathorn first met working at a successful software company specializing in library automation. When company ownership changed hands in 2007, the couple decided there were greater prospects to be found elsewhere.

“The company was bought out by venture capitalists,” said Greg, “so we looked at one another and said, ‘Time to go.’”

Determined to strike out for themselves yet unsure which direction to pursue, the Hathorns had often toyed with the notion of opening a beachfront gelateria – a shop that sells Italian-style gelato – after retirement. Then a chance trip downtown gave Sam an idea she couldn’t wait to share with Greg.

“I was out with some friends and saw that there was a little storefront that was for rent, and called him and said, ‘What do you think?’ and he said, ‘I don’t know,’” Sam recalled. “Then the next day he had already figured out what the rent was going to be and practically got his tools together to renovate the spot.”

Rent was affordable enough, but only because it would take imagination to realize the location’s potential.

“This was 2007,” Greg said. “In downtown Huntsville you could hear a pin drop. There were basically bail bondsmen and lawyers on the square. There were one or two eating places that serviced the courthouse, but that was really it.”

Now equipped with a location, a plan and the necessary imagination, there was only one thing the couple still did not know: how to make gelato. They enrolled in a week-long class offered by their gelato equipment distributor in Winston-Salem, North Carolina, where an Italian gelato master was flown in to teach the Old World secrets of his craft.

“We went to the Frozen Dessert University,” said Sam.

“There is a Frozen Dessert University,” Greg added. “They don’t have a football team though.”

Now budding masters themselves, the Hathorns initially planned just to offer gelato and coffee, but Greg soon realized that if business was to be lucrative, they would have to expand the scope of their menu.

“I literally would count people that were walking, count the cars, and just started saying, well, okay, what if 10 percent of these people came in and spent X?” he said. “How much is that, times a day, times 30 days? No, this won’t work. I told Sam, I said, ‘We’re going to need to step up and do food.’”

The answer? Pizza. After contacting a favorite Florida pizzeria, Greg made his way down to the Sunshine State to apprentice himself in the arts of tossing dough and baking pies.

“We’ve long since changed a lot of things since then,” he admits, “but that got us kind of bootstrapped.”

With training under their belts, the Hathorns were almost ready to launch. As they applied the finishing touches, Sam’s design background proved invaluable in minimizing decorating costs.

“Starting small, doing something that you can do yourself, is a key, because once you’ve saved that money, you have that much more money to put into the business,” she said.

From its humble beginnings, Sam and Greg’s Pizzeria / Gelateria witnessed the growth of downtown Huntsville throughout the ensuing years. Today it stands as a cornerstone of the square, a family-friendly alternative to the many bars and nightlife establishments that have grown up around it.

We’re not just a pizza place. We’re kind of stitched into the fabric of downtown.
Greg Hathorn

“They were kind of the first ones to take that leap and come downtown when nobody else was doing it,” said the couple’s banker at Regions, Will Quinlivan. “Some of the initiatives that the city has taken over the last 10 to 15 years have really turned that area around, and Sam and Greg’s was a huge part of that.”

Now well into its second decade, Sam and Greg’s has developed its own identity as it continues to thrive. Though their recipes may have initially been handed down, the Hathorns have since perfected their menu with options all their own.

“Being from Louisiana, I just had to have crawfish on something, so we have the Cajun pizza,” Greg said. “I don’t know where else you can find a pizza that has crawfish and andouille sausage on it, and shrimp, but I still crave it after 14 years.” 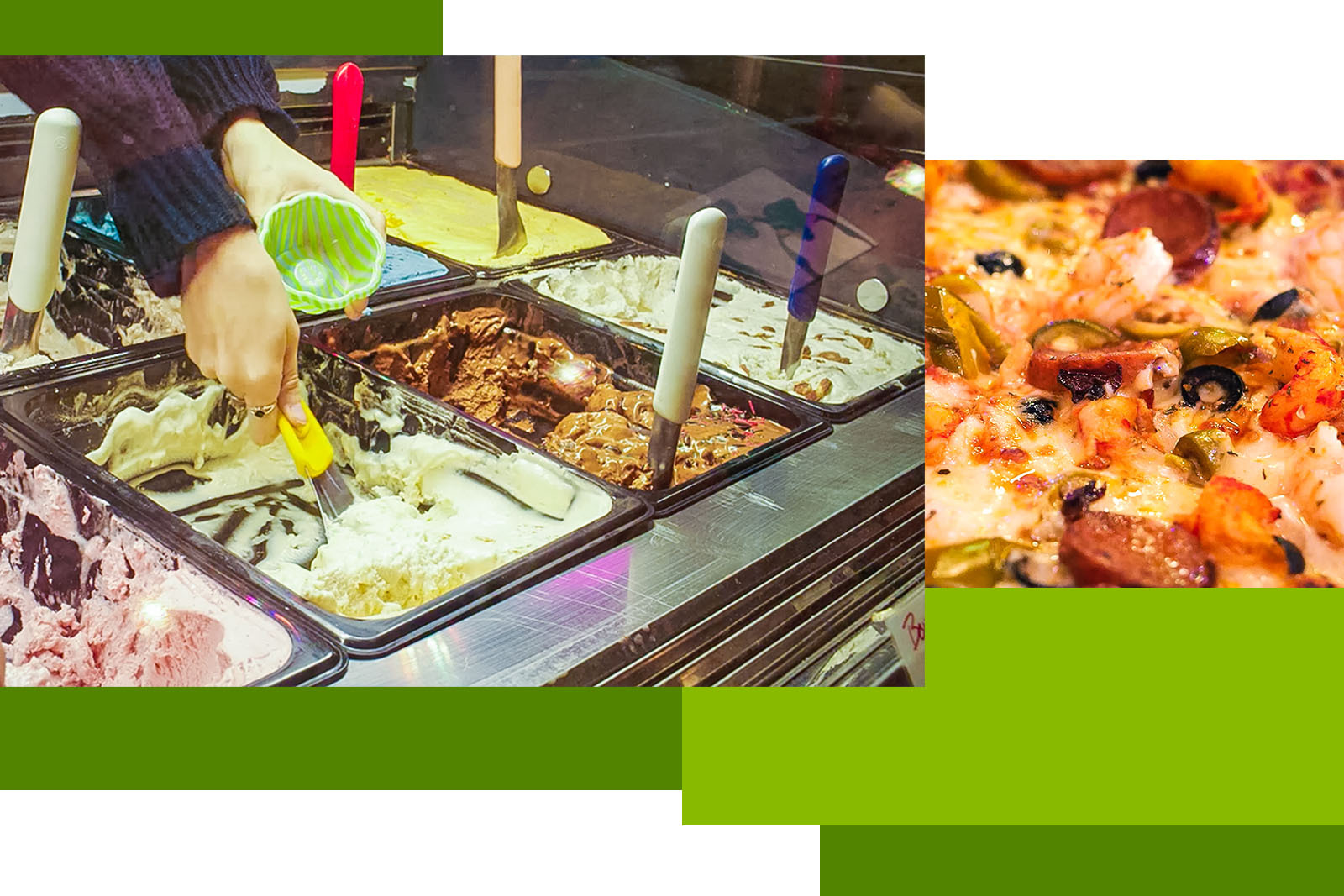 Just as enticing as the food, the eclectic atmosphere holds a lively promise of fun. In keeping with Huntsville’s legacy as a spacefaring center, Sam and Greg’s features a green papier-mâché alien posed for selfies in an old glass elevator. Nine holes of miniature golf await duffers of all ages. The decor offers glimpses of the original 1860s wallpaper that lay hidden for over a century. Lamps made from melted Mardi Gras beads dangle over handmade tables. Drawings, postcards and photos form a collage chronicling a history of happy customers. Overhead, ringing a skylight, murals painted by Sam, her parents and her sister, depict scenes from Venice.

But good food and warm surroundings mean nothing without a well-run kitchen and committed staff. Greg put his software engineer’s mind to work in service of maximizing efficiency.

“It’s all about processes, putting processes into place, teaching your management team your processes, getting their buy-in, and then letting them do it,” he said.

The Hathorns’ approach is one that Will Quinlivan appreciates as their banker.

“Not only do they have that entrepreneurial spirit or that passion, they also have the brains to go with it and the business acumen to go with it, to really build a strong business that makes sense for us to bank,” he said.

Sam and Greg’s Pizzeria / Gelateria was the first step in the transformation of a modest square into a vibrant entertainment district that now forms the epicenter of Alabama’s fastest growing city. The Hathorns have since reinvested the fruits of their success into a second location in the suburb of Madison. Only this time their wager was backed by years of experience and the community growth they pioneered.

“They said we were the feel of downtown Huntsville,” said Sam. “We had created that, really.”

“We were humbled,” Greg added. “We thought, We’re not just a pizza place. We’re kind of stitched into the fabric of downtown.” 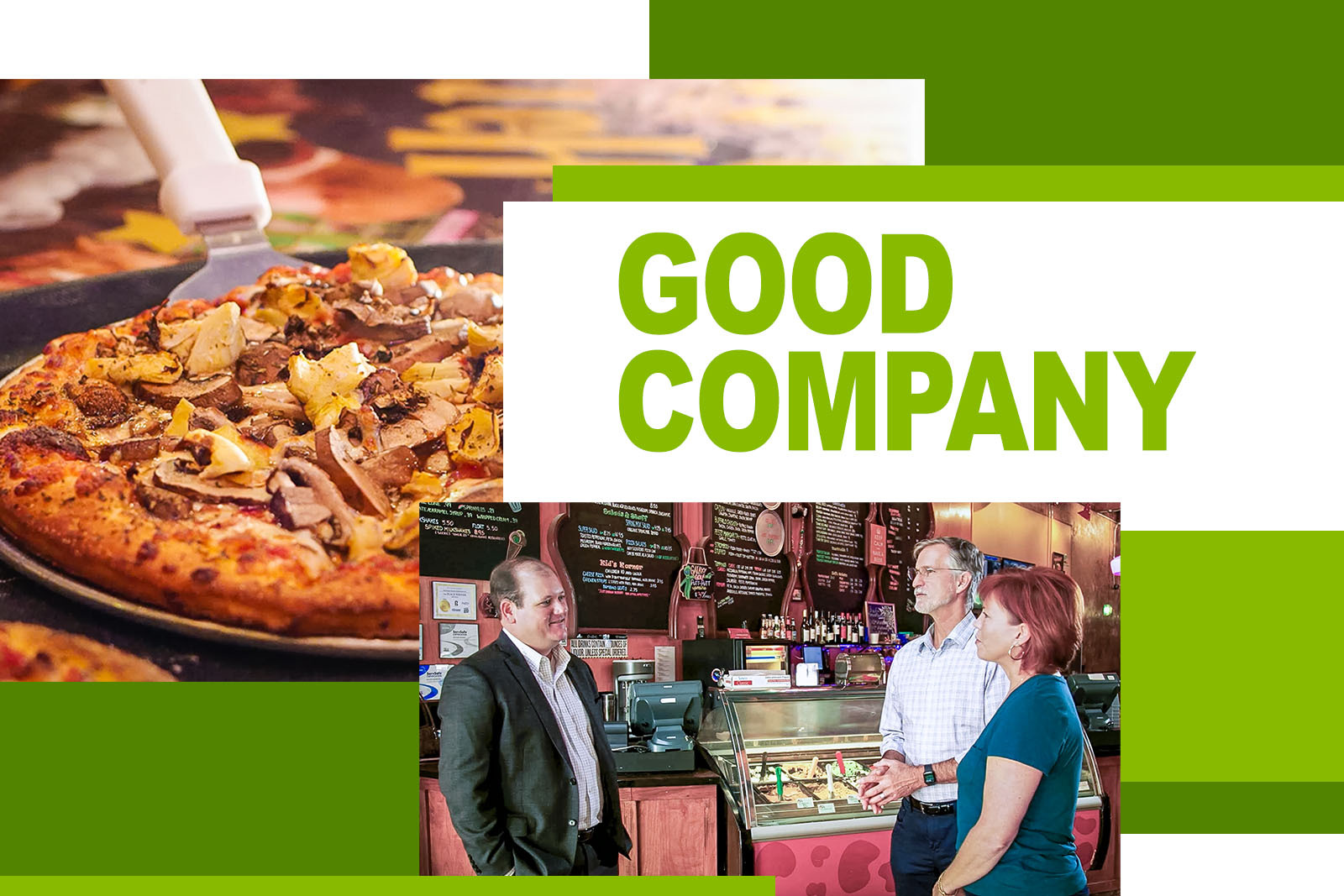 Good Company: Digital Justice for All