While Georgia continued to solidify its grip at the top, Washington made its 2022 poll debut and two familiar programs made impressive moves in the latest AP Top 25 presented by Regions Bank.

Penn State climbed eight spots to No. 14 after a dominant win at Auburn and Oregon rocketed 10 spots to No. 15 after throttling BYU at home. 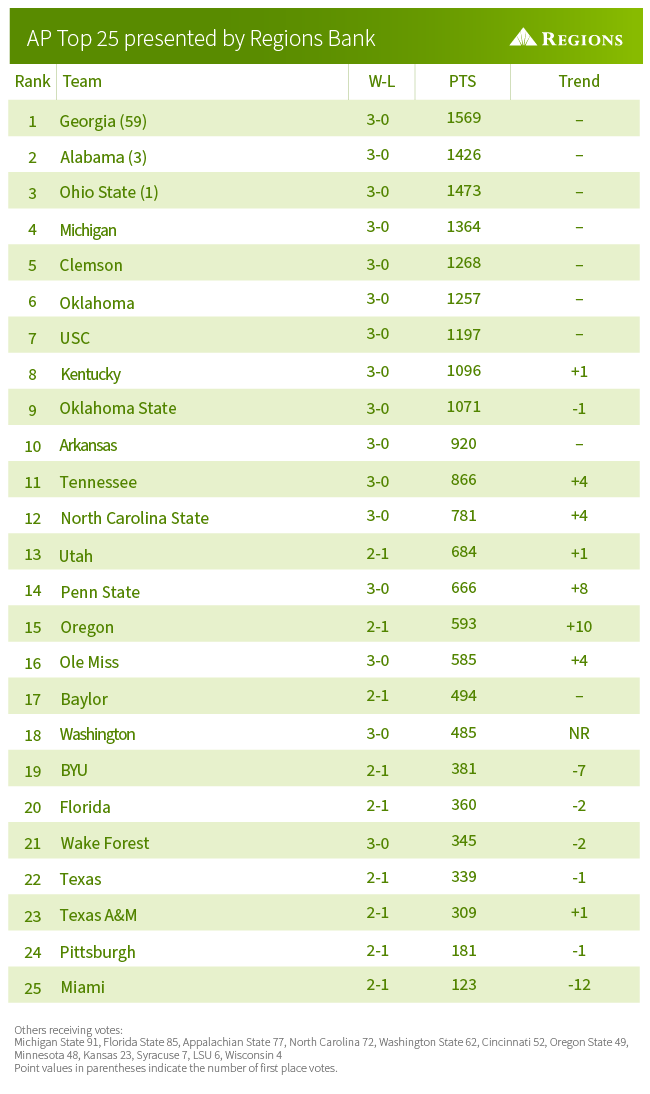 Washington made its season debut in The Associated Press college football on Sunday at No. 18, and Penn State and Oregon moved into the top 15 after all three had decisive nonconference victories.

No. 2 Alabama received three first-place votes and No. 3 Ohio State got one.

No. 4 Michigan, No. 5 Clemson, No. 6 Oklahoma and No. 7 Southern California all held their spots. The one change in the top 10 was No. 8 Kentucky flip-flopping with No. 9 Oklahoma State. Arkansas stayed at No. 10.

The top 10 teams, most playing overmatched nonconference opponents, won their games Saturday by a combined 521-120.

The shuffling came in the next 10.

No. 11 Tennessee moved up four spots. Penn State jumped eight to No. 14 after routing Auburn on the road. No. 15 Oregon moved up 10 spots after handily defeating BYU, which slipped seven places to No. 19.

Washington beat previously ranked Michigan State 39-28 to earn a ranking for the first time since the 2021 preseason poll. Washington has had two brief stays in the AP Top 25 the last two seasons but has been mostly unranked since the early part of the 2019 season.

“To get this win now is just going to continue to put this belief in our guys. It’s only going to get better for us as we go to work in practice,” first-year Washington coach Kalen DeBoer told reporters after the game.

Michigan State dropped all the way out after being No. 11.

Ole Miss moved up four spots to No. 16 and No. 20 Florida slipped a couple of spots after barely getting by South Florida at home.

At the bottom of the rankings, Miami dropped 12 spots and landed at No. 25 after losing at Texas A&M. The Aggies went up one to No. 23.

The Pac-12 has its most ranked teams since the first regular-season poll of 2021, when it had five.