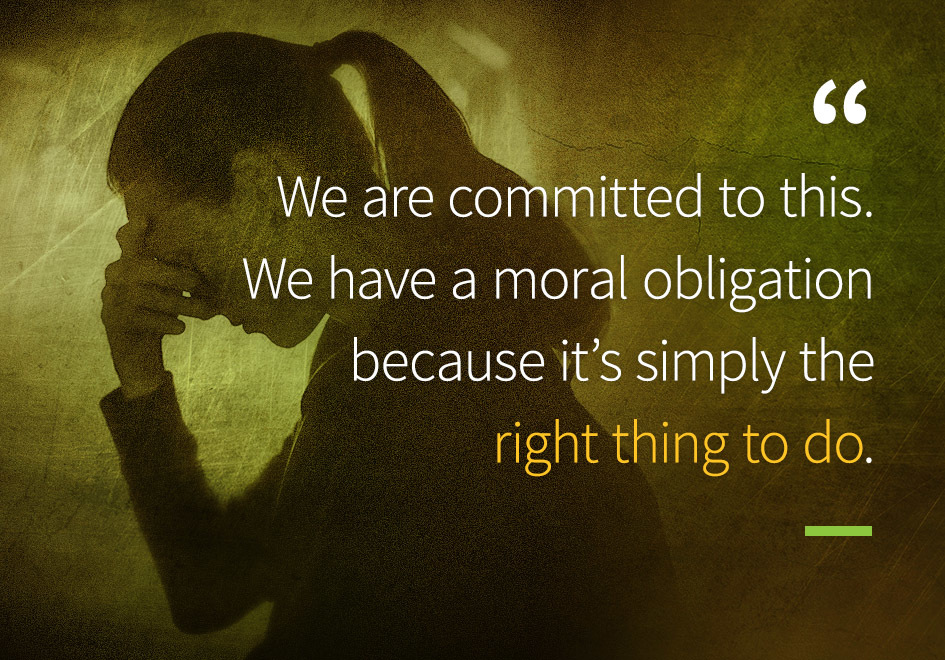 Dixie came from a good family. They lived in a nice community. On the surface, things appeared normal.

Yet Dixie was sexually abused as a child, and the abuse continued into her teens. She was told not to talk about it.

“In college, I met a ‘plant,’ a girl who introduced me to a trafficker. At first, I thought the guy wanted to be my boyfriend,” Dixie recalled. The plant was there to find vulnerable girls. And the “boyfriend” she trusted instead groomed her, then pushed her into a world of easy money at a high personal cost.

“From there,” Dixie said, “I was sexually exploited.”

Human trafficking involves the use of force, fraud or coercion to obtain some type of labor or commercial sex act.


Every year, millions of men, women, and children are trafficked worldwide – including right here in the United States.

Even in the Bible Belt.

“I-20 is the sex trafficking superhighway,” said Doug Gilmer, the Resident Agent in Charge for the Homeland Security office in Birmingham, Alabama. “There are more people trafficked in the 140 miles between Birmingham and Atlanta than in any other stretch of the United States.”

The reason is geography and access. Both cities are transportation hubs.

“Look at the map: There’s nowhere in the U.S. you can’t get to because of the interstate spurs,” Gilmer said. “Chicago? It’s a straight shot up I-65 from Birmingham. LA? Go I-20 west through Dallas.”

Homeland Security launched the Blue Campaign to raise awareness about the crime that deeply affects people, families and communities. The perpetrators don’t care about the tremendous human toll. They’re out for the money.

“Commercial sex is an annual $290 million industry in Atlanta alone,” Gilmer said. “In Birmingham, it’s an estimated $110 million a year.”

For the criminals, the return is huge. A drug dealer receives a shipment of illicit product then sells to customers. Once the drugs are sold, they are gone.

“And every time you get a new supply, you’re running a risk,” Gilmer said. “But when you essentially ‘buy’ a girl, the pimp ‘sells’ that girl 10 to 15 times a day – every day – for a year and for years to come.”

“Over the course of the past year, Hope for Justice trained 12,234 people globally and over 2,500 in the United States,” said Richard Schoeberl, the U.S. Investigations Team Leader. “We know that awareness leads to rescues, much like the 300 people rescued in the U.K. and a most recent rescue in Nashville, Tennessee.”

In addition to training through Hope for Justice, Regions provided financial support to hire an additional investigator in Nashville to aid in locating and rescuing victims throughout the Southeast, Schoeberl said.

“We are trying to raise awareness for our associates in our first line of defense,” said Jim Phillips, Compliance Intelligence Officer at Regions. “Because if we wait until the second line discovers a problem, it may be too late to rescue victims.”

Before joining Regions, Phillips worked in the Justice Department, where he was tasked with securing convictions against perpetrators of child sex and human trafficking crimes.

“I prosecuted all kinds of white-collar crimes and cybercrimes,” Phillips said. “But there is no other crime that has the devastating effect of human trafficking and sexual exploitation. Like most crimes, it all boils down to money.” 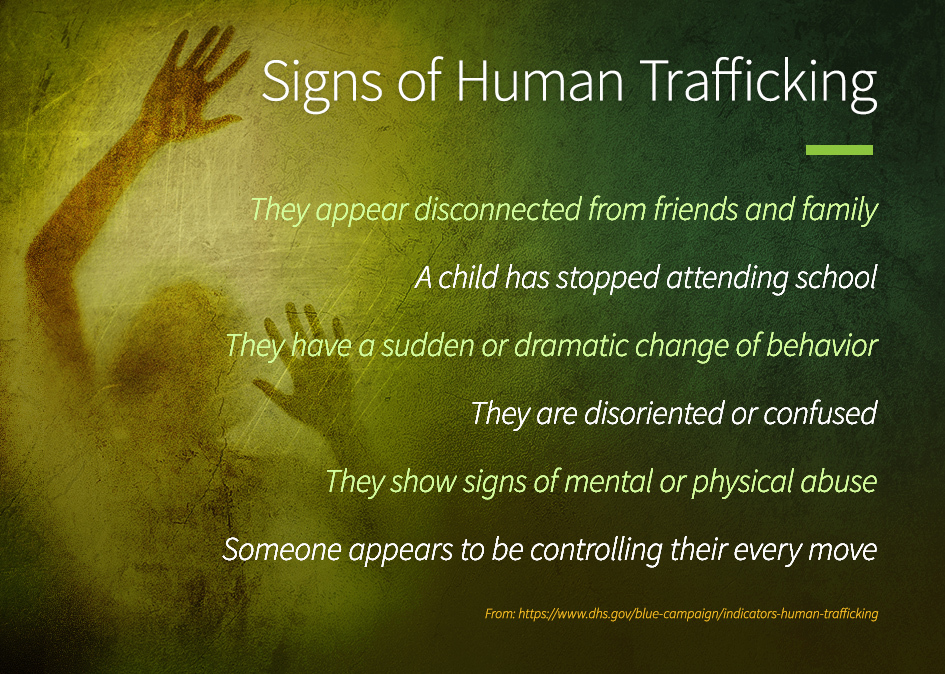 If you identify a potential victim of human traffic, do not confront a suspected trafficker directly or alert a victim to your suspicions. Instead, contact law enforcement.

Regions partnered with other regional banks, along with local, state and federal law enforcement, during Super Bowl LIII in Atlanta to identify suspected human traffickers in real time. A similar task force, this time led by Regions, will do the same during the 2021 World Games in Birmingham.

In addition to Hope for Justice, Homeland Security and law enforcement, Regions works with a computer forensics team at UAB to address areas where human trafficking meets the web. It’s an ongoing battle. But zeroing in on traffickers – and tracking down the finances – helps curtail the crime and free its victims.

“It’s a moving target, but we are committed to this,” Phillips said. “We also have a moral obligation because it’s simply the right thing to do.”

For Dixie, her college introduction to human trafficking led her into a spiral that took years to escape.

“My whole world was crashing around me,” she said.

She moved to Atlanta, looking for solid footing and a fresh start. But she met a new friend and started hanging out with the “wrong crowd.”

“We did (recreational) drugs,” she said. “They took me to a club – it ended up being a ‘trap house,’ a warehouse near Turner Field. Anything could happen in that place, from stabbings, to murder to rape and drug deals.”

There, she was auctioned off.

Later that night, she was taken to a hotel and introduced to a life of trafficking. She found herself back in a world of exploitation. Outside the hotel, a few days later, a man approached in a car and offered her a seemingly better alternative. Desperate, she jumped in, hopeful.

He took her to another, nicer hotel.

That’s where her real human trafficking training began. The man groomed her to become more than an escort. She learned how to run services, organizing the business, handling calls and assigning girls to clients.

The men in charge, she said, “are mastermind criminals. They are smart. They are organized.” They also know how to keep girls in line – not always with violence and abuse. Instead, gifts of plastic surgery, expensive clothes, nails, accessories – out of reach for most of the victims in everyday life – prove enticing.

As time went on, she was beaten and abused. She tried to kill herself with drugs.

“I remember laying in the hotel room,” Dixie recalled. “I said, ‘God, if you are who you say you are, I need you.’ Instantaneously, God was speaking to me, walking me through the steps out of this.”

Those steps delivered her to the WellHouse, a Birmingham-based refuge for victims of human trafficking. A survivor, Dixie graduated from the program and now gives back as a staff member and peer advocate.

But there are thousands, if not millions more, who need the help she found.

Regions is trying to help identify the criminals who control these lives.

And at Homeland Security, agents like Doug Gilmer work daily to not only stop the activity, but also provide options for the victims of human trafficking. Gilmer works with Regions and the Alabama Bankers Association to spread the word.

“We are fighting the good fight,” Gilmer said. “This is about illegal money – unbelievable money – and drug addiction. But, more than anything, it’s about breaking the hold these traffickers have over these girls.”

It takes resources and commitment to break the hold. And that’s what banks like Regions offer, Gilmer said.

“A bank can identify and track illegal proceeds,” Gilmer said. “They can suspend bank activity (of the criminals). It takes a huge commitment. Thankfully, Jim has experience prosecuting these cases. You need an influencer who is a change agent, and that’s what we have in Jim and in Regions.”