There was no offseason hangover for Georgia. The reigning nationals champion opened the season in overwhelming fashion, thumping preseason No. 11 Oregon 49-3.

The story was similar for No. 2 Alabama, which blanked Utah State, an 11-game winner last season; and No. 2 Ohio State, which pulled away in the second half to defeat Notre Dame 21-10. While there was a slight shuffling at the top, the real suspense is how the rest of the top 10 would shake out. 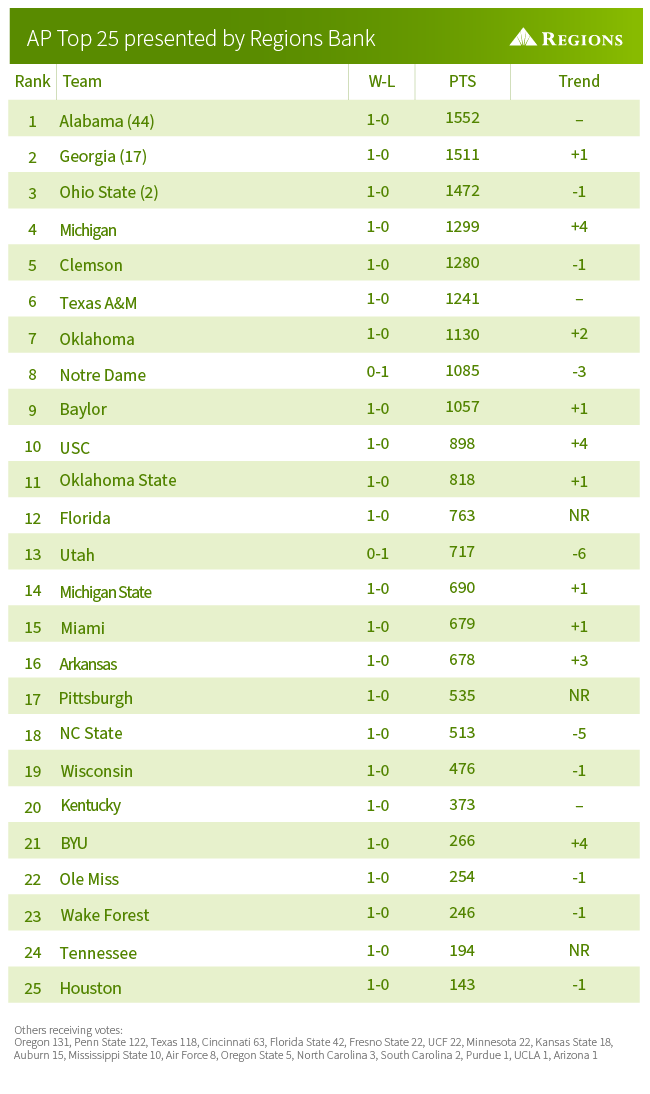 Georgia moved up to No. 2 in the first Associated Press college football poll of the regular season, passing Ohio State, after the defending national champions dominated their opener.

Alabama remained No. 1 in the AP Top 25 presented by Regions Bank released Tuesday, receiving 44 of 63 first-place votes from the media panel and 1,552 points.

The Bulldogs narrowed the gap on the Crimson Tide, receiving 17 first-place votes.

Ohio State slipped to No. 3 and received two first-place votes. Michigan moved up four spots to No. 4.

Clemson dropped a spot to No. 5.

Florida debuted at No. 12 after its thrilling victory at home against Utah on Saturday night. The Utes slipped six spots to No. 13 after the loss.

The rest of the top 10 was Texas A&M at No. 6, followed by Oklahoma, Notre Dame, Baylor and Southern California.

USC is in the top 10 for the first time since the final regular-season poll of 2017, when the Trojans were eighth.

The eighth-ranked Fighting Irish dropped three spots out of the top five after losing 21-10 at Ohio State.

For the Bearcats, who made the College Football Playoff last year, it snapped a run of 45 consecutive poll appearances, which was the fifth-longest active streak in the country.

Florida and Tennessee moving into the rankings gives the SEC eight ranked teams, the most for a conference since the SEC had eight three times in 2020.

No. 24 Tennessee at No. 17 Pitt. First SEC/ACC ranked nonconference matchup of the season.

Follow Ralph D. Russo at https://twitter.com/ralphDrussoAP and listen at http://www.appodcasts.com.