After Georgia struggled for the second straight week against inferior opposition, Alabama rode a backup quarterback to victory at Arkansas, a win that propelled the preseason No. 1 team back to the top of the AP Top 25 presented by Regions Bank.

But the biggest story after a chaotic Week 5 was the arrival of six newcomers to the poll, including the best story of the season – 5-0 Kansas. 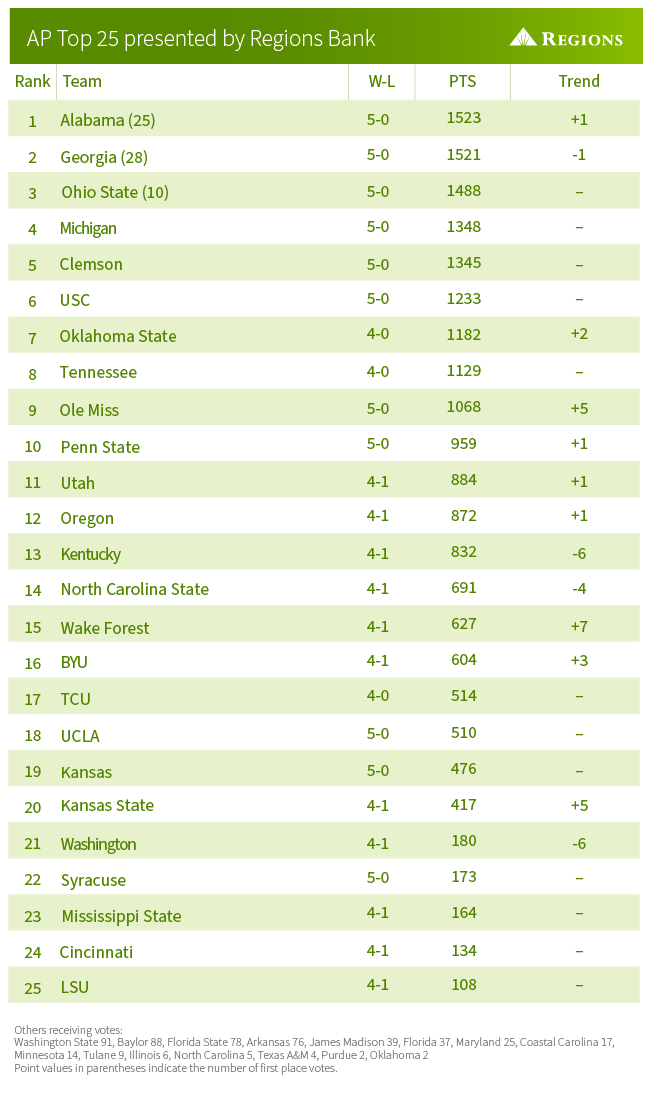 Alabama reclaimed No. 1 from Georgia in The Associated Press college football poll in one of the closest votes in the recent years, and six teams — including Kansas — made their season debut on Sunday.

Ohio State remained third, but the Buckeyes also gained some ground on the top two, getting 10 first-place votes.

The Crimson Tide started the season at No. 1, but the defending national champion Bulldogs took the top spot away from their Southeastern Conference rivals after Week 2 when Alabama needed a late field goal to beat Texas.

The Bulldogs remain unbeaten but needed a fourth-quarter rally to beat four-touchdown underdog Missouri on Saturday night. Earlier in the day, the Tide managed to pull away from Arkansas in the second half without its 2021 Heisman Trophy winner, who was injured early in the second quarter.

No. 4 Michigan, No. 5 Clemson and No. 6 Southern California all won and held their places this week, though the Wolverines and Tigers are now separated by just three points.

No. 7 Oklahoma State, followed by Tennessee, Mississippi and Penn State, round out the top 10.

The rest of the AP Top 25 got a major overhaul after 10 ranked teams lost, five to unranked opponents. That cleared the way for seven teams to move into the rankings this week, most notably No. 19 Kansas.

The Jayhawks are ranked for the first time since Oct. 18, 2009, which was the longest drought for a team currently in a Power Five conference.

The closest margin between Nos. 1 and 2 in AP poll history is zero. Oklahoma and Miami tied for No. 1 in the 2002 preseason poll, and Miami and Washington shared the top spot in mid-October 1992.

The last time there was a one-point margin between the top two teams was 1992, when the Hurricanes and Huskies were separated by a point in the weeks before and after they were tied.

With Kansas back in the rankings, the longest poll appearance drought belongs to Illinois, which was last ranked in 2011. And the Illini have positioned themselves to make the leap with a 4-1 start heading into their home game against Iowa next week.

In
The voters generally decided to start from scratch at the back half of the rankings, flipping seven teams.

Out
Among the seven teams to drop out of the AP Top 25, five of them will be unranked for the first time this season: Oklahoma, Baylor, Arkansas, Texas A&M and Pittsburgh.

Florida State and Minnesota had brief stays in the AP Top 25. The Seminoles and Gophers were teams on the rise for a week and then both lost at home.