Cincinnati moved one step closer to shaking up the college football postseason.

The Bearcats climbed to No. 5, the program’s highest ranking in a dozen years, after beating Notre Dame 24-13 on the road. That helps solidify Cincinnati’s quest to become the first non-Power 5 team to crack the College Football Playoffs.

Yes, the season is young, but Cincinnati has already dispatched Indiana from the Big Ten and a Fighting Irish team that was ranked ninth. The only currently ranked team left on the Bearcats schedule is American Athletic Conference rival (and No. 24) SMU on Nov. 20.

Meanwhile, Iowa blasted Maryland in a Big Ten game 51-14 to jump conference rival Penn State in the voting. Fans of the two have but a week to argue over the legitimacy of the rankings, however, because No. 3 Iowa plays No. 4 Penn State Saturday to claim control of the Big Ten.

While the SEC’s Alabama and Georgia remained atop the rankings – hold the popcorn — the Big Ten is this week’s power league with five ranked teams among the top 12. 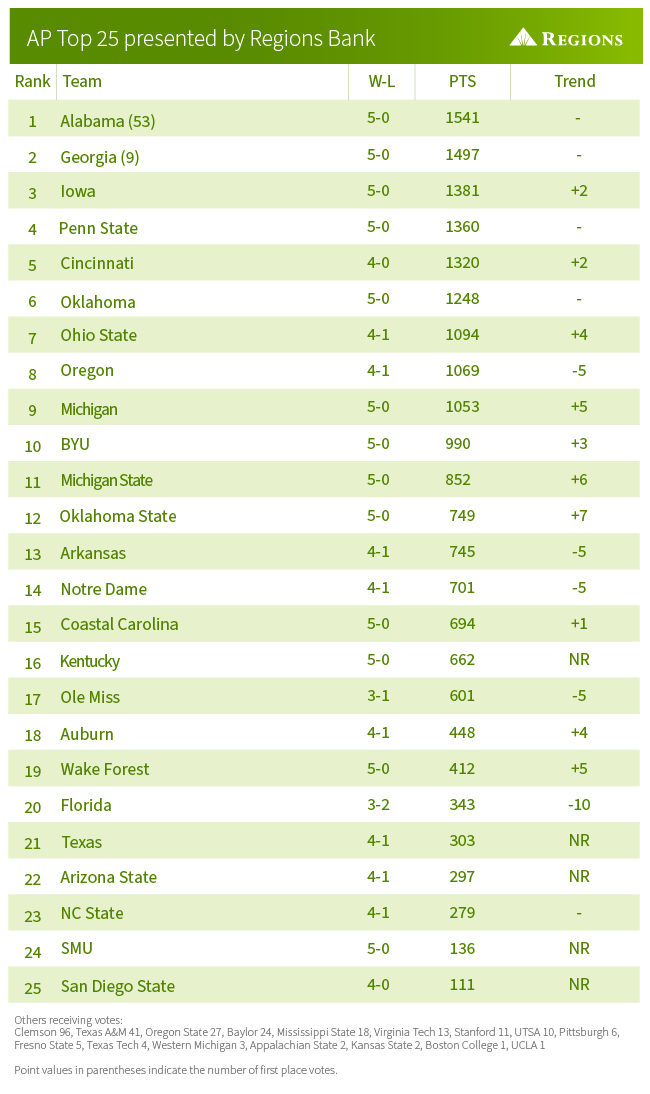 Midway through the season, it’s strange that a rankings-based debate over the top two teams in the Big Ten doesn’t include Ohio State.

The Buckeyes very well might be the best, and the voters certainly showed their respect by ranking them ahead of Oregon despite a Week 2 home loss to the Ducks and a meh home win over Tulsa in the following game.

This week’s Penn State-Iowa clash is the Big Ten’s game of the year — so far.

It will be the highest-ranked matchup in Iowa City since 1985, when the No. 1 Hawkeyes beat No. 2 Michigan 12-10 on a field goal as time ran out for what Hayden Fry called the biggest win in program history.

Last week, the SEC had four teams in the top 10 and five of the top 12. Alabama and Georgia are the SEC’s only two in the top 10 this week.

The ACC’s first absence from the top 20 in 10 years lasted only a week thanks to Wake Forest moving up to No. 19.

Creating a Culture of Inclusion: A Fireside Chat

Tide Takes No. 3 After Oklahoma Struggles

Voices of the SEC: David Kellum

Cincinnati Climbs to No. 2 in Latest AP Rankings