As David Cooks, a 15-year-old high school sophomore, got ready for school, he had a little pain in his back. But he didn’t think much of it. Exams were that day, and basketball tryouts were coming up.

Later, as he practiced shooting hoops, his performance was off. Something was going on. The pain in his back quickly grew more serious.

“Within a matter of 24 hours, I went from walking to needing a wheelchair to get around as a result of a blood vessel that erupted on my spinal cord,” Cooks explained.

But he’s accomplished more in the 40 years since his spinal aneurysm than most people do in a lifetime.

He’s succeeded in the corporate world. He’s an author and a sought-after speaker. He’s taught economics and mentored hundreds of people. All since he became paralyzed.

Cooks had mentors who recognized his strengths. They never let him settle.

“They saw beyond ‘today.’ They saw things in me that I didn’t necessarily see at the time,” Cooks shared. “They always were honest with me. They held me accountable. And they pushed me to go beyond where I was.”

Cooks’ comments came during the latest in a series of discussions on diversity and inclusion at Regions Bank. Clara Green, the bank’s head of Diversity and Inclusion, leads the conversations, which are open to Regions associates and streamed to company offices across several states. After reading Cooks’ book, Getting Undressed – From Paralysis to Purpose, Green invited Cooks to visit Regions and share his experience as the bank recognizes October as National Disability Employment Awareness Month.

Here are some key takeaways from their conversation:

It’s not what happens to you. It’s how you respond.

“Obstacles don’t redefine your goals or redefine you,” Cooks told Green. “What they do, actually, is they redirect you. If you believed it before you had life hit you, you still should pursue it. You may just have to go about it a different way.”

For example – his passion for basketball.

“It was always one of the things I loved to do,” he said. “And that love didn’t become paralyzed once I became paralyzed.”

So he returned to basketball – as a coach – inspired by his mentors.

“A good coach or a good leader takes you beyond where you think you can go,” Cooks said. “And that was very important for me.” 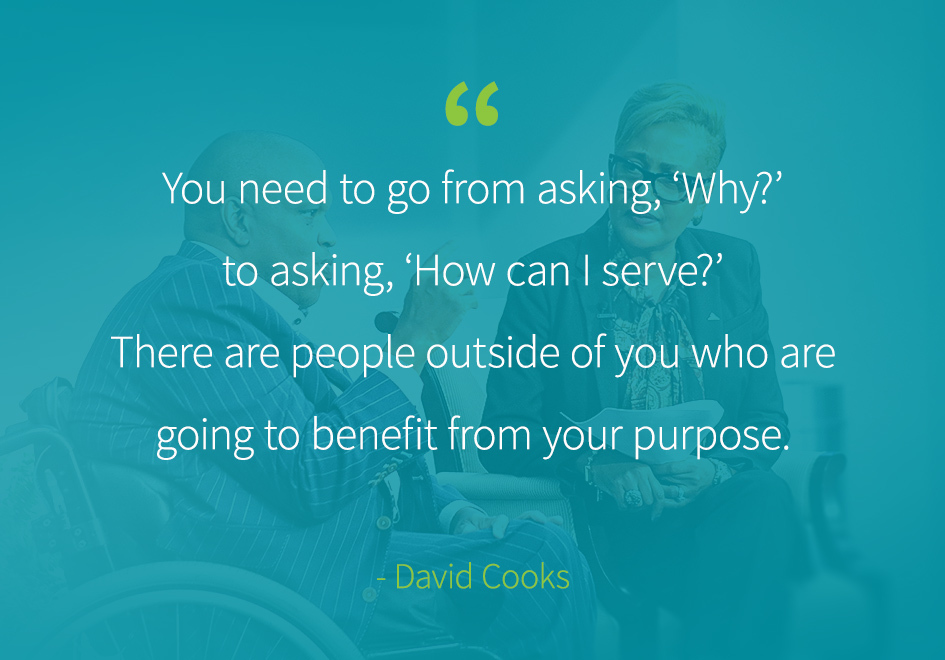 “I want to empower people to move from their place of paralysis – to purpose,” Cooks shared.

Over time, Cooks himself discovered that while he has several passions – including coaching and teaching – ultimately, his purpose is to positively impact lives. True, his circumstances today are not what he expected in the past. But through determination and perspective, his purpose – and his path toward reaching it – became clearer.

“I believe every person is born with a purpose. You were put on earth to do a specific thing,” Cooks said. “That’s what you need to find. Because when you find that, everything else falls into place. Your success, and your ultimate fulfillment, is based on you fulfilling your purpose.” 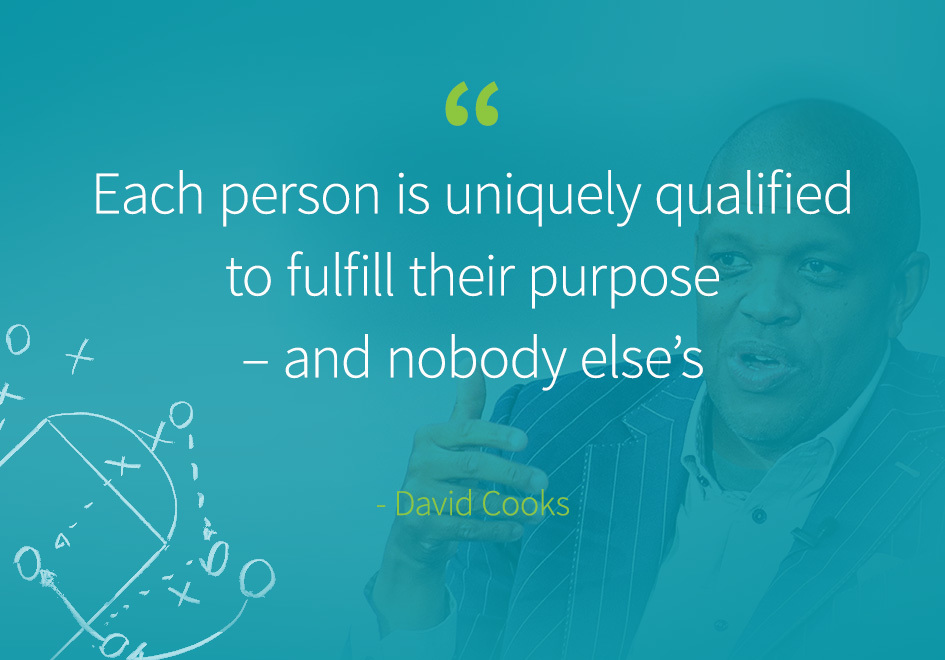 Why he chose ‘Getting Undressed – From Paralysis to Purpose’ as his book’s title.

“For me, it was a moment of independence,” Cooks explained, recalling his two-month stay in a rehabilitation center immediately after his spinal aneurysm. The staff had already taught him how to get dressed. But they’d yet to teach him how to get undressed. One night, when he was ready for bed and no staff members were available to help, he taught himself.

“I worked at it. I got it wrong for about an hour and figured out how to get undressed,” he said. “Getting undressed represented freedom and independence for me.”

But there’s more behind the phrase.

“It’s about change. It’s about transformation,” Cooks said. “When you change clothes, it’s about where you’re heading and what you’re going into. It’s an indication of what’s next. You’re always taking off something, and that’s the past.”

Rather, he said, it should be a new beginning. 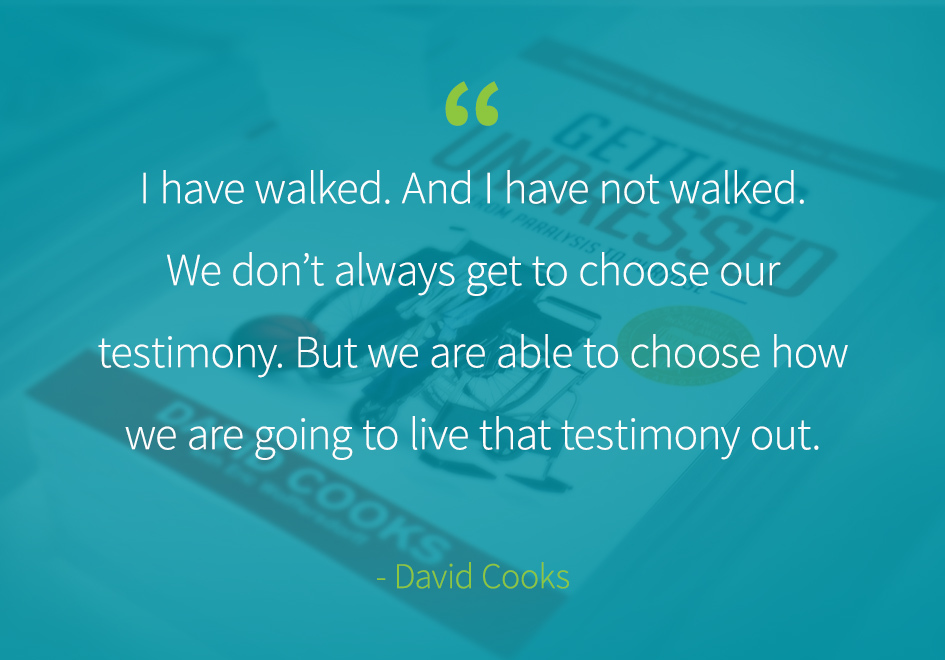 Make the effort to understand each other.

When people have differences, it can be awkward or uncomfortable to acknowledge them. Being in a wheelchair for 40 years, Cooks has seen the reactions and heard the questions. People ask, “Is it okay if I offer help?” They wonder, “Will he be offended if I offer to do something for him? What are the right words to use around him?”

“I think we’re uncomfortable because we’ve created a society now where we don’t know what to say to anybody. We walk on eggshells all the time,” Cooks lamented.

There was that time a colleague encouraged him to “get his feet wet” regarding a new task at work. She was mortified when she realized she’d said that to someone who’s paralyzed.

“Get your feet wet is an internationally known phrase that you use to reference starting to get something done. But she thought I should be offended because I’m in a wheelchair,” he said. “So I was like, ‘Wow, this is serious.’ And I began to tell her, ‘I wasn’t offended. I didn’t take it that way.’”

Cooks encourages people not to avoid offering assistance – and not to remain in awkward silence, worried someone may be offended by an honest or sincere question. Likewise, he encourages people with disabilities to be patient, understanding and upfront with others, who may not understand all the challenges they face. 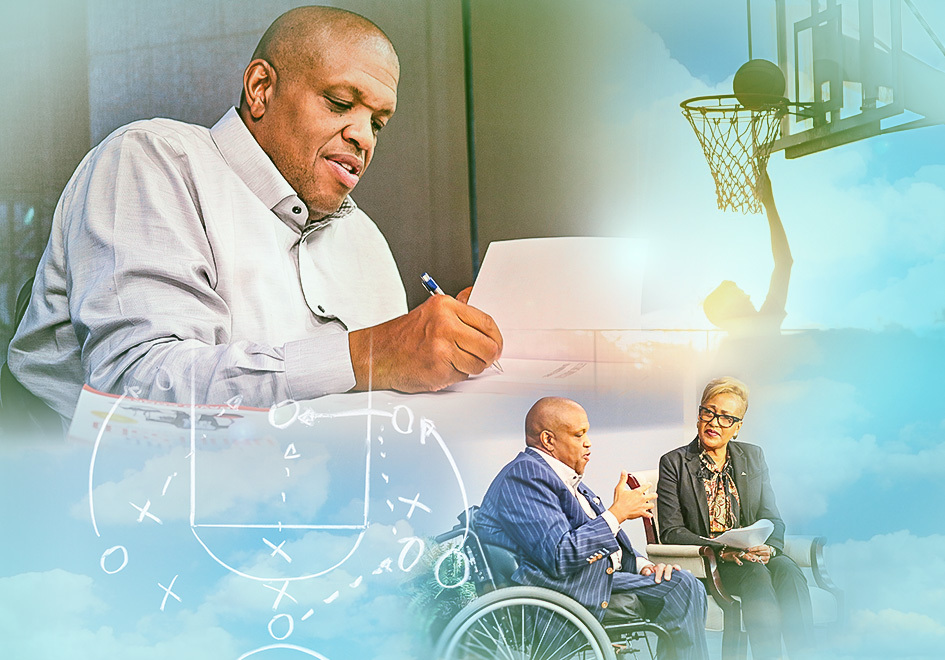 There’s still progress to be made.

Green pointed to Department of Labor statistics showing that, across all age groups, people living with disabilities are still less likely to be employed – and less likely to occupy management roles – than those who do not have a physical limitation.

The numbers reflect a continued need to build on the inclusion of people with disabilities, even nearly 30 years since the Americans with Disabilities Act was enacted, giving people greater access to public spaces and workplaces.

“In terms of making people’s lives better and more functional, I think we’ve come a long way,” Cooks reflected. “I think the next step, now that I can get in the bathroom, is to figure out how to get in the boardroom. And once we get to that step, I think we’ll be where we need to be.”

“There are two key ingredients to David Cooks’ success,” Green said. “One – he refused to give up on his purpose. Two – there were people in his life, and in his workplace, who recognized his strengths and didn’t view him through the narrow lens of a disability.”

As more people do the same, another great purpose will be fulfilled.

“Our goals in having this discussion, and others like it, are to raise awareness and encourage greater understanding of how we can be more affirming and inclusive toward people whose experiences are not like our own,” Green concluded. “David’s insights represent another important step in our ongoing journey toward greater diversity and inclusion.” 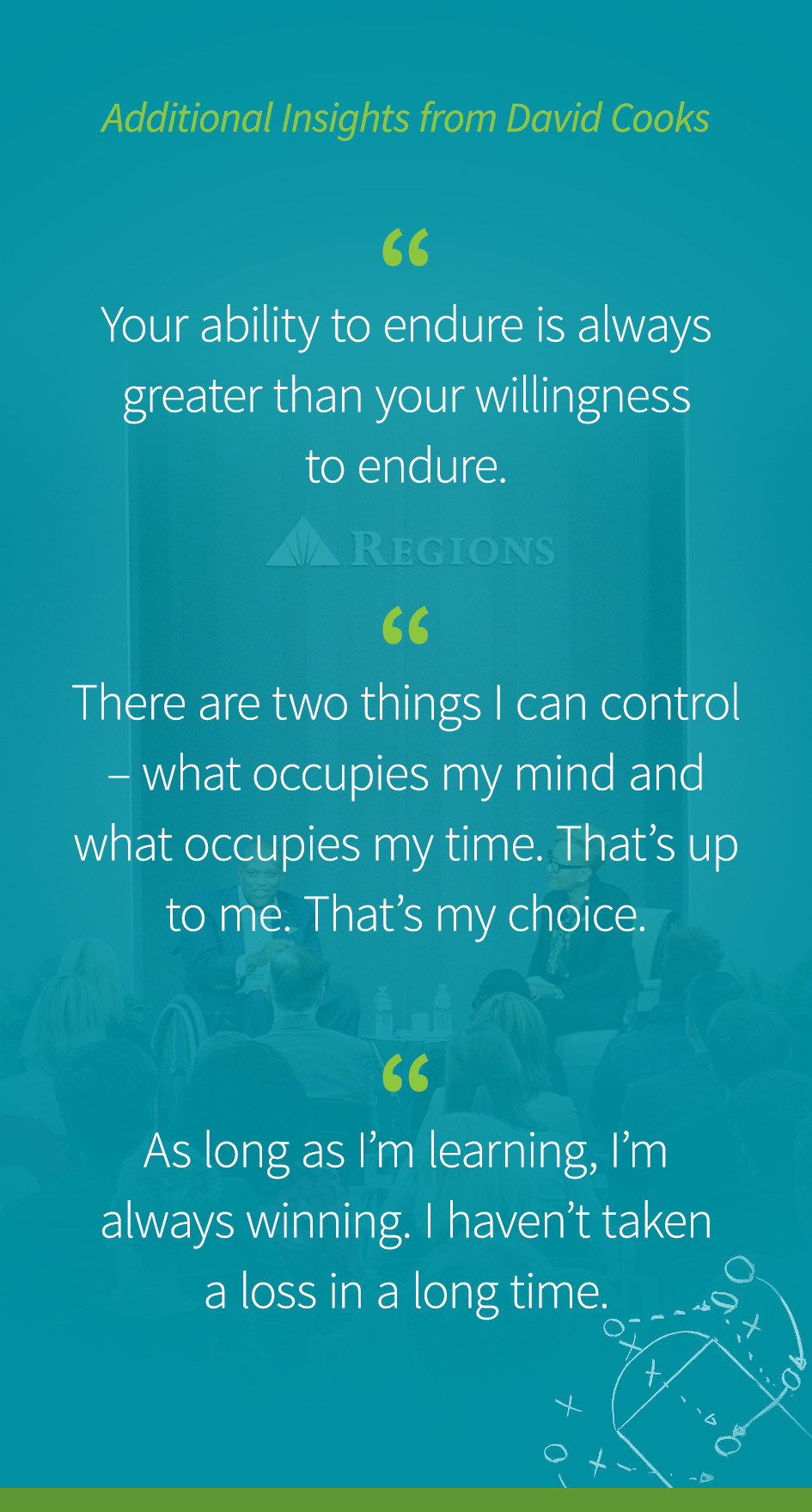 The Pressure of Being First

‘More Alike than our Differences’