Kent Eikenberry is aware the first could have resulted in him not being here today.

“My mom lost her two sisters to the Spanish flu when they were children,” said Eikenberry. “One passed away in 1918, the second in 1919.” 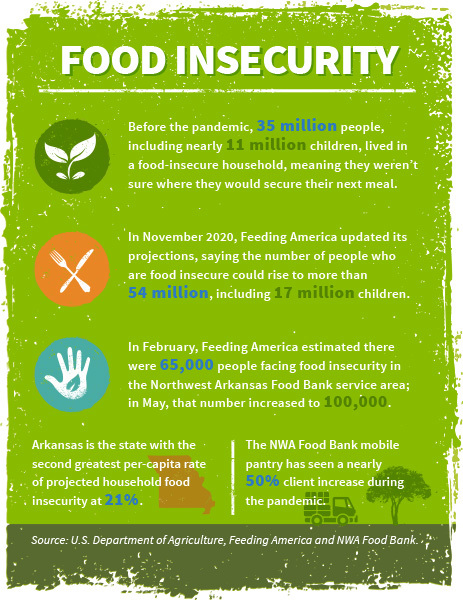 “We serve so many people who never imagined they would be in a food line,” said Eikenberry.

Regions Bank is doing its part to help. Bank associates in the city of Rogers recently donated $2,500 to support the NWA Food Bank’s efforts.

Through their nationwide programs and large-scale partnerships, Feeding America organizations are able to multiply donations by ten-fold, meaning this contribution will provide 25,000 meals to people in need.

“The NWA Food Bank has long provided much-needed support, but that need has been amplified,” said Jerry Vest, market executive for Regions in Northwest Arkansas. “Our community must respond to those needs, as we always do. That’s our job at Regions, too.”

Eikenberry is grateful for those who are responding to the still-emerging need.

“This is a mission people see,” he said. “It’s a mission people want to support. We have easily had thousands of first-time donors this year. Companies like Regions are checking in to see how we’re doing and wanting to help.”

For Eikenberry, his role as NWA Food Bank’s president and CEO is far more than a job.

“I was being called to do something else,” he said about leaving a 42-year newspaper advertising career. Eikenberry had a nagging feeling he needed to do something bigger. He reached out to the NWA Food Bank president and CEO at the time.

“I told her, ‘I’m not trying to take your job,’” said Eikenberry. “She then told me she was getting ready to retire and had suggested that I take over.”

In 2016, he did. It’s been a rewarding change; even during a crisis he never saw coming.

“We started 2020 with the best-laid plans,” said Eikenberry. “Then everything stopped in March, with it starting to impact us in April.”

Eikenberry and his staff immediately expanded their efforts to reach and feed their neighbors in need a variety of ways. That included adding pop-up pantries to their regular locations totaling 20 stops each month and purchasing additional shelf-stable goods to further extend provisions. 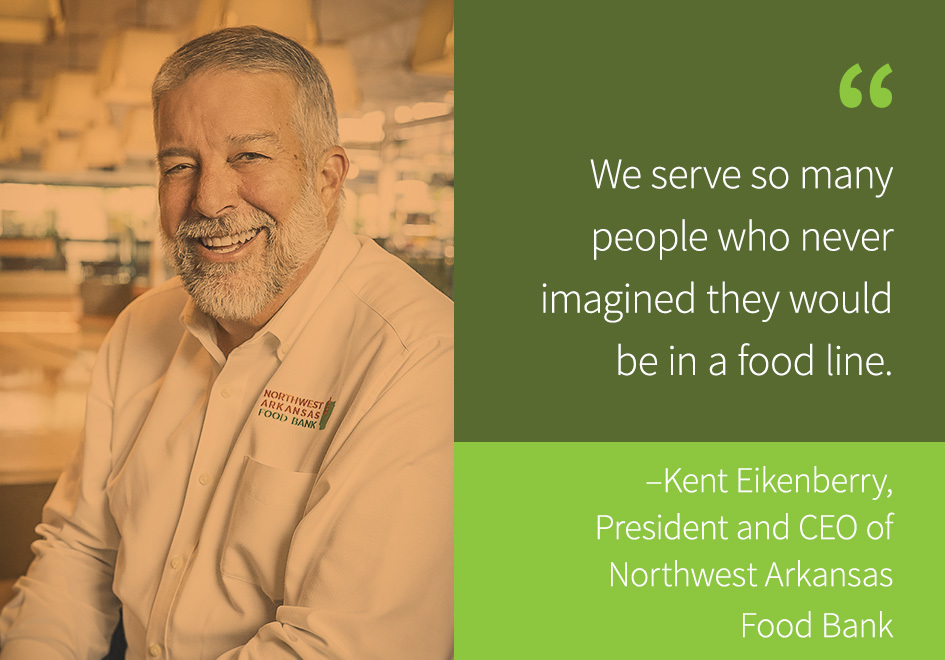 “I knew I would find the money someplace,” said Eikenberry regarding the additional costs of making the changes. “Our pantry has been half empty or half full some days, however you want to refer to it. But they have never been empty. It’s all good.”

The early days of the pandemic also required shifting volunteers to different pantry sites after 25% of their smaller pantries were initially forced to close. Food distribution has changed to drive-through service to keep everyone safe.

Like their community donors, NWA’s staff and board members have also gone above and beyond. Eikenberry gets emotional discussing their commitment.

“They are the best group of 30 people you could ever hope for,” said Eikenberry. “They work hard and never complain. And I have the best 19 bosses in the world with our board. They trust us to do what’s best. They’ve told us, ‘We know you have important work to do.’”

If the statistics are any indication, NWA Food Bank’s work won’t be slowing down anytime soon.

“I believe what we’re seeing now is the norm way past the foreseeable future,” Eikenberry said. “Economic recessions can take years to be resolved.”

The one thing that is certain during so much uncertainty? Eikenberry’s faith.

“During this time, I’ve learned that I’m not in control,” he said. “I have a strong faith. As long as I try not to be in control, things will be fine. I’ve also learned I’m stronger than I thought. Every day, I pray that I make good decisions for the food bank.”

Vest, who’s known Eikenberry for almost 30 years, has faith he’s the right person to meet the added demands of this unusual time.

“When Kent left his career in the newspaper business to lead the NWA Food Bank, I knew it was a vocation for him,” said Vest. “Kent has a personal need and calling to serve others. This is a perfect role for him.”

A role that’s been more than 100 years in the making, and one that would surely make his mother proud.