For the seventh time in the last 15 years under Nick Saban, Alabama opens the season as the AP’s top-ranked team. Overall, it’s the ninth time Alabama has begun the schedule as the national favorite.

This time, it wasn’t even close.

Alabama claimed 54 of 63 first-place votes, way ahead of No. 2 Ohio State with six No. 1 votes and defending national champion Georgia with three.

It’s the second straight preseason No. 1 for Alabama. Overall, the Crimson Tide trails only Oklahoma, which has been the preseason No. 1 10 times since the poll’s 1950 introduction. 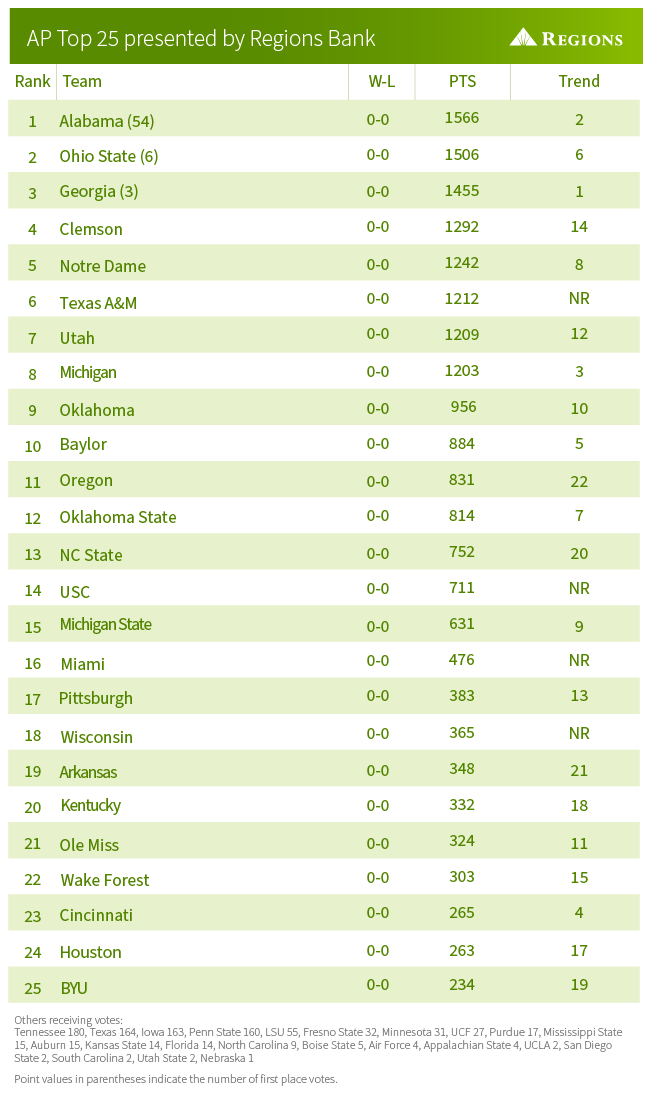 More From Ralph Russo of the AP

The Crimson Tide started last season No. 1 and finished ranked No. 2 after losing the national championship game to the Southeastern Conference rival Bulldogs.

Alabama coach Nick Saban recently called 2021 a rebuilding season for his Tide dynasty, which has won six national titles over the last 13 years. He has a point.

Ohio State brings back a Heisman Trophy finalist at quarterback while at Georgia, most of the key players from one of the best college defenses of the last 25 years are now in NFL.

Texas A&M, which finished last season unranked despite handing Alabama its only regular-season loss, starts this season No. 6.

Defending Pac-12 champion Utah is seventh, the best preseason ranking in school history. Defending Big Ten champion Michigan is No. 8 after making the playoff for the first time last season.

No. 9 Oklahoma is the highest-ranked Big 12 school, one spot ahead of defending league champion Baylor.

Turning preseason No. 1 into a national championship has proved tricky throughout history, even for Alabama.

The Crimson Tide has gone on to win the national championship after starting No. 1 just once under Saban and twice overall.

Since the AP preseason began in 1950, there have been 11 preseason No. 1 teams that also finished the season top ranked. Alabama was the last to do it (2017).

How did the seasons work out of those teams? Ohio State went 9-2 and finished the season No. 9. The Irish went 7-5 and unranked again.

You have to go all the way back to 1990 when six schools with coaches entering their first full season appeared in the preseason Top 25, according to Sportradar. That list includes some notable names: Gary Moeller, Michigan; Ken Hatfield, Clemson; Gene Stallings, Alabama; Jack Crowe, Arkansas; Paul Hackett, Pittsburgh; and John Jenkins, Houston.

Follow Ralph D. Russo at https://twitter.com/ralphDrussoAP and listen at http://www.appodcasts.com.