If you live along the Gulf Coast, you know these names. Hurricanes. The ones to which new storms are often compared.

Another name joined the list in 2020. Sally. The recovery is still under way.

In the aftermath of the hurricane, Regions Bank and the nonprofit Regions Foundation committed resources to help with immediate and long-term needs. Now, another step in the recovery is moving forward.

Regions’ Mobile market executive, Christian White, is among those leading the charge, along with the city and Mayor Sandy Stimpson. The focus: Mobile’s beloved Bienville Square.

The square’s oak trees were heavily damaged by Sally. It was overwhelming for White to see what happened at the popular public square, just around the corner from Regions’ local-market headquarters.

“Regions Bank has been part of downtown Mobile for many years,” White said. “Our associates are often seen in Bienville Square walking, eating lunch and just getting some fresh air during the workday. The square means a lot to those of us who live and work in Mobile. We knew after Hurricane Sally destroyed the oaks, we had to do something to help restore it.”

Regions recently announced a $50,000 contribution toward the square’s restoration. With an additional $200,000 in commitments from the City of Mobile, implementation of a master plan to restore the square and preserve its heritage will soon begin.

“Regions Bank is committed to supporting community partners that are making an incredible difference in helping the Gulf Coast recover from Hurricane Sally,” White said. “Bienville Square supports downtown Mobile’s tourism and economic development, and it provides a special place for community engagement. It was a natural opportunity for Regions to join the Downtown Parks Conservancy and Mayor Stimpson in restoring Bienville Square. The bank’s mission is to make life better in the communities we serve, and through the work to restore Bienville Square, we are ensuring Mobilians and others will have opportunities to enjoy the square for generations to come.”

Mobile Mayor Sandy Stimpson said the contribution from Regions will improve one of the city’s most iconic landmarks.

“From the moment we first surveyed the damage sustained during Hurricane Sally, we began a discussion about how we would repair and revitalize this vital part of downtown Mobile,” Stimpson said. “I want to thank Regions Bank for their contribution to this effort to restore one of our City’s most iconic landmarks and the Downtown Parks Conservancy for their vision to preserve and improve Bienville Square for future generations of Mobilians.” 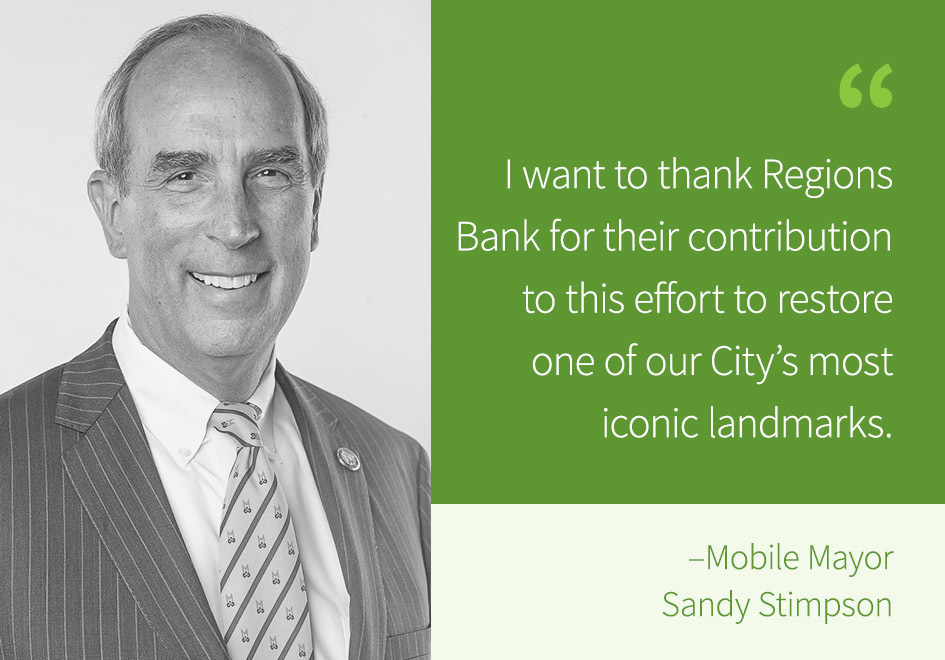 The Downtown Parks Conservancy (DPC) is overseeing the project. DPC President Kellie Hope said the revitalization preserves the historic elements of the park.

“Created in the 1850s, Bienville Square has undergone many changes over the decades, but the classical design and oak tree canopy have remained constant,” Hope said. “The current plan, commissioned by the DPC, preserves these features and addresses the issues of soil compaction and its impact on the health of the trees. With slight alterations to the central plaza around the fountain, the replanting of trees, and the addition of lush landscaping, this revitalization will restore and improve our treasured public space. The design ensures that our citizens and visitors may continue to enjoy the park, as it will accommodate many of the gatherings the square has hosted over the years, without causing further damage to the iconic live oaks.”

Phase One of the revitalization involves redesigning and repaving the central plaza; upgrading the secondary pathways; new structural soils and storm drainage; upgrades to and restoration of the Ketchum Fountain; and the planting of trees.

While Sally is not remembered fondly by folks in Mobile, for White, the hurricane represented a turning point in the history of Bienville Square.

“Sally provided the opportunity to transform a place that is important to so many Mobilians,” White concluded.  “I’m proud Regions is part of this project.”

Regions Foundation supports community investments that positively impact the communities served by Regions Bank. The Foundation engages in a grantmaking program focused on priorities including economic and community development; education and workforce readiness; and financial wellness. The Foundation is a nonprofit 501(c)(3) corporation funded primarily through contributions from Regions Bank.

About Regions Financial Corporation
Regions Financial Corporation (NYSE:RF), with $147 billion in assets, is a member of the S&P 500 Index and is one of the nation’s largest full-service providers of consumer and commercial banking, wealth management, and mortgage products and services. Regions serves customers across the South, Midwest and Texas, and through its subsidiary, Regions Bank, operates more than 1,300 banking offices and 2,000 ATMs. Regions Bank is an Equal Housing Lender and Member FDIC. Additional information about Regions and its full line of products and services can be found at www.regions.com.

Finding What Makes You Tick